One of those days

Did you ever have one of those days where upon awakening, you just know you're in a good mood? It's as if the planets are in align and forces are at work, plying their magic to make you the recipient of joyful sprinkles of stardust and happiness. 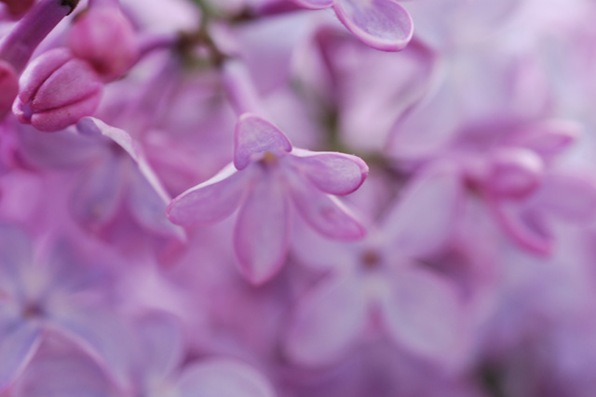 Yes, I know I'm weird. But for some strange reason, when I woke up this morning, I was really happy. It was as if all the bad stuff that began last June had never happened at all and I actually really felt that maybe life was going to be okay, after all.

And surprisingly, the day continued in that vein. My favorite songs played on the car radio on my ride to my job. Little things that I did worked the first time I tried them. Everything went smoothly at work. An entire classroom of second graders wrote me thank you notes that nearly had me in tears. I's been their guest reader the previous day and one child wrote "you read to us with such expression. I can tell that you really like to read. I bet you were a good reader when you were young. When I grow up, I want to read like that."

Good stuff. And good sentence structure, as well. I was very impressed and quickly wrote them all back telling them as much.

In the afternoon, I went outside to see my friend and co-worker, Alisa, who had come to collect her children. She's been out on medical leave and it was so good to see her smiling face. While we were standing out there, I felt something gently plop on my head. At first I thought it was beginning to rain, but looking up, I saw seagulls. I'd just been the recipient of seagull poop! Not to gross you out or anything, but it was very runny, so no worries. Besides, everyone knows it's good luck to have a bird poop on you.

Driving home, I seemed to make every light. And when I got home, I actually stopped to collect our mail from the box out on the main road. I don't like getting the mail because it's usually depressing with all the bills. But today, we got a letter from Social Security. I pulled into the driveway, stopping the car. With trembling hands, I opened it, thinking I'd have to appeal, but received a nice surprise. My husband's disability has been approved.

And Lost is on tonight.

PS ~ Please excuse the sappiness. It's just the stardust still at work. Ha!

That's wonderful, Kate! All except the bird poop, but I guess in a way that was good, too... Hope you have many more days just like this one.

Happy news. See. the poopy head was worth it!

So happy to hear such wonderful news from you. Yippee!! I have a huge smile on my face knowing how happy you are and how finally you can catch some breathing room.

So glad you had a wonderful day!
A little odd, but I just read another post written today about bird poop being good luck, have you read Hayseeds & Horsefeathers?

yay! I'm glad you had a good luck day. How wonderful.

Awesome news! So glad that SS came through - that's got to be such a relief for you both, and well deserved.

Nice. There's a winery in Napa Valley that if one of the million swallows poops on you before you come in your tasting is free.

Sounds like a great day. I'm so glad the disability has been approved. What a relief that must be to the two of you. I'm happy for you, Kate.

And I'll bet that lovely lilac blossom smelled a whole lot better than the gull poop!

Lilacs are my favorite flower. I grew up in Michigan and they grew all over the place, but in Arizona I have not seen any since I've been here. Tee-hee I've seen lots of pooh in posts lately; one from POTD; one from Jinksy. It's funny how it runs.

Really enjoyed the upbeat post! Glad for your good news. Also like the latest photo of George.

Great news, I am so happy for you. And everyone deserves a really great day, in fact, you deserve more than one, maybe you will get a few in a row.

You and Diane Lane are the only folks I know who've been pooped on, and I didn't know until Under the Tuscan Sun it was good luck :)

Have a good tomorrow.

On Oprah the other day they were talking about how women in other countries believe a bird poop facial is what keps their skin looking young. You're well on your way!

I'm so glad that you received good news from Social Security. I am a social worker and have heard that Social Security is well known for denying disability the first time through. I'm so happy for you. You can at least breath a sigh of relief. Happy for you. Love your photos and your blog.

You deserve a day like this , glad you enjoyed it!

Having a bird poop on you is good luck? WOW, I got lucky a couple of times and never knew it!

Who would have thunk that being bombed by a bird is good luck? Hmmmm...I think I'll take my chances without it, thank you very much :)

Lovely photo, Kate. The color, composition, and bokeh are perfection! I have spring fever really bad.

So glad to hear about your good day and arrival of hub's SS disability. You deserve a good day...I hope it's a sign of many more to come!

Hey, all. Thanks for your kind words.
Welcome, bv! Now you don't have to lurk anymore. Or not.
Melanie, yes SS is known for that. But just recently, they have put several illnesses on what they call a "fast track". We don't get the payments any earlier, but we do get the decision, I guess. His illness was one of the ones. I think they chose ones that were expected to end in death.
And yes, birds pooping on you is really considered good luck. So is rain on your wedding day.
Go figure!

Long may that stardust continue - you need it. Glad you had such a lovely day.

I love having days like that. I haven't had too many lately. My daughter has been pooped on 3 times in her her life, me just once. Come on good luck.

No sappiness, just stardust! And it is good luck to have a bird poop on you (according to the movie Under the Tuscan Sun anyways)!! Let the magic continue...

Awesome news! You're right those are the days that the planets align.

Your photos always have such a soothing, calming aura about them.

Hope you have another great day today. Elaine

Hi Kate! Im glad that you had such a wonderful day! I hope that you have many more great days like that, you deserve them!

Beautiful words and photo, Kate! I love days like that. (well, not the bird poop!) Glad the disability is approved. I'm sure that's a big relief.

Its always nice to hear about a day filled with good news...

Great news!! I'm so happy for you!! Everyone needs just a good day, and for the best news to be kept for last! Here's to better times!

Don't you just love it when the stars are all lined up like that for you? I love to hear about happy days!

Kate! Kate! Kate! I am ecstatic for you and Andrew. Happy, happy days! Thank the Lord for wonderful news.
And ha ha! I told you Jinn was still alive...hehehe!!!
I am doing the Snoopy Dance now!!!!! I may break my exclamation key!!!!!!!!

So happy to hear that SSI went through for your husband! And glad that your day was wonderful (and lucky)... and your last photo of George is precious. I wish I could get my Nolli dog to pose like that. He just won't do it!

Wow....what a great great day for you! Love hearing that! The music, the bird poop, the kids,... all of it!

Relief about your husband's disability. Thank you Lord.

I'm smiling for you.

KATE PUT THE MUSHROOMS DOWN!!!!!
I HAVE GIFTS FOR YOU AND ANDREW. I WILL CALL WHEN I GET HOME TONIGHT!

Whooo hoooo!! I'm so glad you had such a wonderful day. minus the bird poop , you are better than me to consider that lucky. Hope the luck continues!

Maria, I've never read Hayseeds & Horsefeathers. I'll have to find that one.
Hello to bv who has read but never commented. I love hearing from people who say that! I think I was reading Pioneer Woman's blog for about a year and never commented.
Thanks, all.

Poop on dee 'ead is lucky? Really? Or was that just perspective?

I'm glad you had a good day & the disability has been approved!!

Great post! I was smiling for you and with you all the way through! Bird poop, cherry chapstick, red lights and all!

Yay! Isn't ss the slowest thing? It seemed to take forever for Kyla's to come through as well.

Oh Kate what a difference an attitude makes huh? Even made bird poop on the head a positive. You make me laugh.

Things are looking up.

I think you deserve some good fortune Kate! And I know just what you mean -- those days that just go your way and it seems as though the universe is smiling upon you. Love your perspective.

Kate...just reading this post has made me happy! I am so glad the SS has been approved! Yippee!

That is such great, great news and such a relief for you two. I am so happy that that waiting for a decision part is over for you.

And if bird poop on the head is truly lucky, I'm not sure what my problem is since I live in a house full of them. ha ha ha