The postman cometh. For George.

I have this strange aversion to the act of picking up mail. Oh, I always pick it up eventually, but I tend to let it pile up for as much as a week couple days before I break down and collect it. I do have several sound reasons for my mail-phobia, one of which is that I just don't want to see all the bills that the postman brings.

And another other reason is that it's just downright dangerous going to my mailbox! It's way out on the main road and directly across from a much-used intersection. If a car is turning left from the main road into the road opposite my driveway, other cars will travel around it, passing on the right and this is exactly where our mailbox sits. It's been hit once, too, since we moved here last October. Smashed to the ground back in November. So I'm really careful about picking up the mail and keeping my eyes on the traffic. 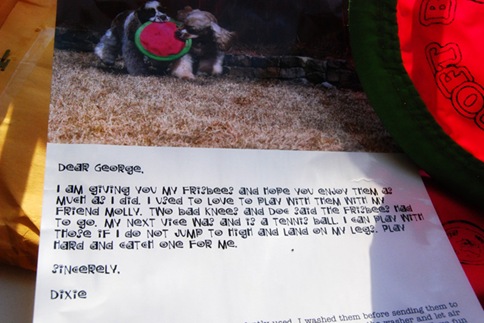 Today was one such day that I did my duty by collecting the mail. Traffic was light and the road looked good. And wow! The mailbox was jam packed.

There was something I had ordered from Le Jarden girl, who was having a buy one print, get one free sale on her blog. There was that apron I ordered for myself (I'm not sure if I like it yet), and there was a package addressed to George Young. 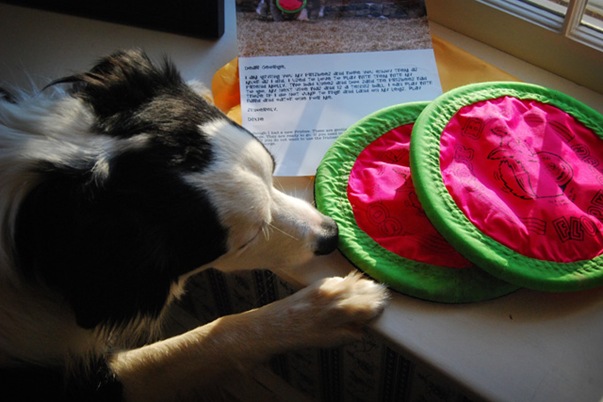 In the package it was a pair of soft frisbees and a note from Dixie and her owner, Chere. Dixie's knees are poor and she can't run and fetch frisbees like she used to, so she gallantly gave up her favorite toy to a friend in need.

I must have been making a fuss over the new toys because George jumped up to have a look-see. 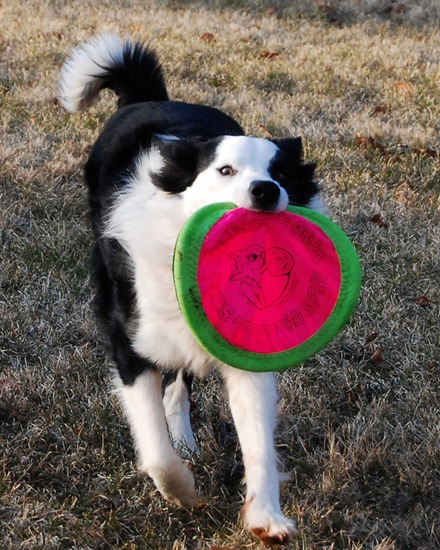 When he saw what it was, he wanted it right away. So we headed outside to try one of them out. And these frisbees are great! They are so much softer on his mouth. And they fly really well.

It's now his new favorite toy. In fact, I saw him sleeping with it later on. So, thank you Dixie! And thank you, Chere. You've made my dog very very happy.

awwwwwww Love the present for George he absolutely looks to be in pup heaven playing with it!
Have loads of fun with those George!

the world needs more Dixies and Cheres. How kind of them...
I have a border collie but she is very grungy compared to George...How do you keep him so clean?

I love George's new toys! He is a lucky boy! Maybe Dixie has a crush on him;)

I so much enjoy your George posts. He looks like such a fine and joyful friend. You must spend extra time keeping him so spiffy. Glad he appreciates the new toys.

Hey, hi all. I just had to get on to say that we just spot clean George. He hasn't had a full blown bath since last August, I think. He just photographs well.

Aww what a sweet gesture.

Aww, that is so sweet! And he slept with his new toy! How cool is that!

How nice for George - now he won't need any chapstick! He's such a cutie.

How sweet of Dixie and Chere to send those Frisbee's to George. It looks as if he will be enjoying them for some time.

Kate, I never did like getting the mail either because of bills. To depressing for me. Now I have signed up for so many freebies and samples that I actually enjoy checking the mail. haha

Yep. George is a lucky dog. And I do the same thing with my mail. I have actually resorted to asking my brother to check my mail box for me now. I wonder if there is such a thing as mailboxphobia.

well, i can tell you there is certainly a phonephobia....15 years of bad 'mostly' or good new i would receive and was responsible to spread was to much for me! now i hide from the phone...kinda piss's off people...oh dear.
bv

wow sweet and so much puppy love. Mr. George looks oh so happy.

What a great idea donating toys from one dog who can't use them to another who can!!! George is one lucky boy and those frisbees look great- I've heard about the softer ones and I got one for our new baby-tossed it for the leos and they just stood there and looked at me- if they actually ran to it they just smelled it...hahahaha...anyhoot, ours is like rubber or something not cloth...I'd think the cloth would last longer then the rubber with a dog but we'll find out!!!
You are smart to not bath George more then neccessary- that is probably why his coat is so shiny- you aren't stripping his natural oils!! We almost never bath the lionesses unless we are going to a show and sometimes even then we drop it if we can brush them "clean".
Why don't you get a post box at one of those mail centers? Then you don't have to worry about your dangerous mail box! Sounds scary- both the bills and car crashes ;-))
A peaceful Sunday too you all...belly rubs to George..

Oh what fun! Flash will be so jealous!

Can you drive to your mailbox without getting out of the car?

I don't suffer from fear of the mail, but do avoid the phone as much as sanely possible. Friends and family probably call it insane...anyway, isn't is so nice to receive good things in the mail to soften the blow of the bad things that inevitably will come to the little box of frights at the end of the road?

George is really a handsome dog, and a credit to his breed.Not to mention, an important member of your family.

awwwwwwwww, how sweet is that? makes it nice to have something so sweet in the mailbox....

i too avoid the mailbox and it's on the front of my porch!! eventually someone will bring it in....if it's a package the maillady puts it in my porch -- i'll get the important stuff!!

here's to many happy frisbee days!!

A big AAAAAAWWWWWWWWW .. how sweet of Dixie to share ...

And I erred yesterday, I told Mac user to depress the Command (Apple)key with the Option key to get the Picture Location in Picasa ..WRONG .. its the Control, Option, Mouse combo that reveals the URL to the photo .. sorry ...

Chere is a generous friend! We are all better in this world for having Chere in it. I'm doubly blessed to have her only a short distance from me and we see each other often. Dixie is sweet to share her toys with Georgie - she is just as kind as her mommy :)

It's nice to know I'm not alone with the mailphobia. And I know several people who have the phonephobia thing going on as well. No, Flea, I really can't stay in the car to get the mail out of the box. Lately I've been pulling up next to the box and putting my flashers on and then carefully getting out, grabbing the stash and jumping back in.
Guess what George brought to me in the bed this morning? I'll give you a hint. It was pink. But I wouldn't get up. It was way too early!!

Those frisbees are the best. Our dog chews them up though. Hope George has fun with them. They will be much easier on his poor little lips :)

Ok...this is what we need for Trux! A soft frisbee. Brilliant.

Lucky George! What a great gift!

I am so happy to see George love his new Frisbees. My little darling, Dixie is the brown and white cocker in the picture, is on 2 to 6 week bed rest. She is very upset with this course of treatment. She has tendonitis in her left front leg. This is a very painful condition and means no tennis balls for this little baby. Dix used to sleep with her frisbee also. Her tennis balls are her passion. She will bark, sleep, run everything with her balls. They are all put up for now. Hopeful in a few weeks she will be better. Have fun George and run a little for Dixie.

George looks one happy dog. Try to visit my blog tomorrow because I am posting a picture of some wonderful horses I saw while I was out today. I came over the top of a hill and there they all were. I thought of you immediately - so please try to take a look at them.

Too precious! I think I'm going to try out the soft frisbees for my two pups :)

Oh, a mailbox! I'd be checking in three times a day, just to check it, you know? I miss mailbox days!

I love George! He does look mighty pleased with those frisbees. I had to make my boy Jackaroo give up frisbee playing as he had no sense of self preservation when leaping to catch them. Hope you and George enjoy them. Be careful with that mail!

George looks so darned happy with his new toy. Kate I think you should model that new apron for all of us.

Gosh bloggers are generous aren't they? I am going to keep an eye out for a soft frisbee, think Jimmy would love it!