Not everything I do turns out right. Sometimes photographs should just stand on their own merit. And sometimes I just don't know what in the world I'm doing. And so, without any shame, here's some of what happens when experiments go wrong. 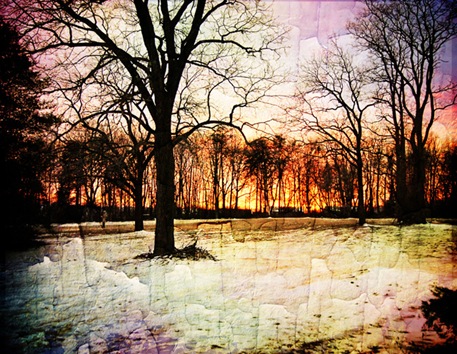 This was a nice sunset we had over the weekend. I laid a multi-color texture over it and thought it needed a little more. So I had another sip of wine and applied more. Then I called it a day. But when I woke up the next morning and looked again at what I did, I thought it looked like a horror show. I think something evil is lurking behind those trees. 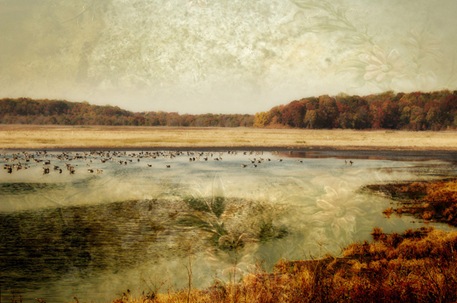 I love the colors in this one. The texture is what helped in that respect, but the giant flowers are freakin' me out, man. This is an interesting texture that's actually a photograph of creepy old wallpaper. With scary flowers. 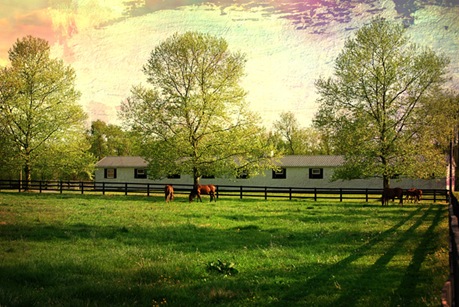 This is one of the first attempts I made with this new process I'm learning. I've come back to it time and again and I'm figuring that if I wasn't sure the first sixteen times I looked at it, then it's a bad one. The sky looks too fake to me.

Sorry about the freaky trip today down my road on the texture highway. Maybe someday, someway, I can be half as good as this guy. His name is Drk. Wyst and he's from Germany. My friend, Mary sent me his flickr link. And for that, I thank her very much.

Don't forget my giveaway on the post below. And come to think of it, there's another over on my friend, Dlyn's site. Both of ours run until Friday. I'll try to have better photos tomorrow!

That last one? Creeps me out. Looks like the cover of a Karen Kingsbury book. :)

The feeling I get when looking at the middle one is a bit of eeriness and doom. Apocalyptic???
Maybe it is the lateness of the day and the fact that I am a bit tired.

If you need help, I'm always happy to help too. What you can do with textures is change up the blending mode to soft light or if you're just doing an overlay you can lighten up the opacity. Also...well, there is so much you can do.

Just keep playing with it and save it as a PSD file so you can delete, change and rearrange the layers. You're doing great and I think you're on the right track.

Thanks, Char. I haven't been saving them as PSD files.

And sorry to scare everyone!

I liked the trip down texture highway! The creepiest one was the ethereal floating wallpaper flowers. :^)

I also think the first one is pretty good - just change the opacity....or change the texture. Try searching on flickr for free textures - ghostbones are great. Michelle Black also has a free action set and two free textures that are great.

Even whey you're ~bad~, you're good. Darn! Wish I could say the same!

As any good Norwegian would say- UFF DA!!!
Seriously, I never talk negatively about something I can't do myself..so I'll just say those pictures were.....interesting.... ;-))

Hi Kate...I actualy like the 2nd. picture. but I still think your photography is beautiful all on it's own....

I love the title of this post; you are too funny. :)

Do you find that there are a few textures that you go back to again and again because they just seem to work better? There are some that look really great alone, but just don't look that great with my photo...

I think pairing them, and predicting which will give you the look you are after, is difficult...

Of course, experimenting is half the fun!

The first photo looks as though the entire world is melting. Interesting.

That first picture reminds me of the woods in the Blair Witch Files - that was filmed in Maryland, wasn't it?

I love the second picture, even if it is wall paper. It reminds me of a puzzle, you know, one of those 1,000 piece ones. In fact, i would love to put together a puzzle of that picture. It could also be an oil painting. It is so cool.

In the third one, is the sky real or an effect? That purply color looks awesome.

Thanks for sharing your pictures. They are a beautiful part of my day.

Debra - I would have been pleased if I had taken any of those pictures!!
It depends surely on what you want the picture to represent - I think Flea's comment is interesting from that point of view - are you meaning to give us spectacular views - or do you want to put some meaning into the shot? Could you perhaps define for us why you wish to add texture?

Like 20 min ago I clicked in here to leave you a message and then someone came into my office, met with me and left .. and I totally forgot I was replying to you.

I think the textures are interesting .... the first one looks like that wine you were sipping was laced with LSD

...the second one is a bit creepy! I can't wait to try this out..will have to update my editing programs..right now I only have and use the basic Picassa...do you recomend any particular one?...my husband has Adobe Photoshop Elements 4.0 I could try...

I liked this post Kate. It makes me feel better to know that you aren't perfect. (I was beginning to wonder) and even your boo boo's look better than my best, so don't feel too bad.

Is it wrong of me to enjoy that first one, even though it is a little frightening?

Kate, I must say, I love all your photos.....but these do actually "SCARE ME" lol

I have a lot of texture mistakes. You know the ones. Where you have a photo that is begging for a texture, but no matter what texture you apply it's just wrong, wrong, wrong!

That first one looks sort of like puzzle pieces. Even if you don't like them I am loving this texture stuff. Keep it up.

Do you think I'm weird - I like the one made out of the wall paper picture.