Warning: lots of photos in this post. I promised yesterday that I’d post a few photos of my trip to see the High Line, a new elevated park in New York City. I hope I didn’t go overboard. 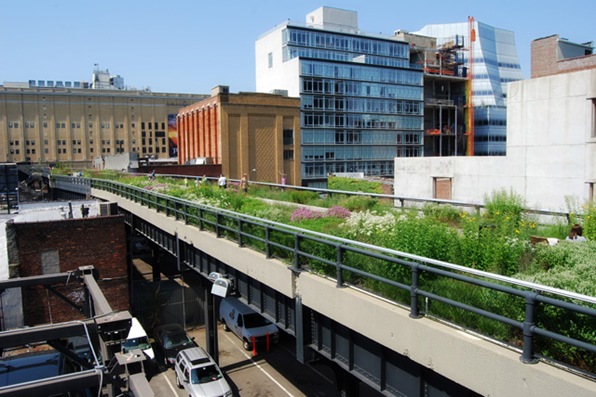 The High Line was built in the 1930’s, as part of a massive public-private infrastructure project called the West Side Improvement. It lifted freight traffic 30 feet in the air, removing dangerous trains from the streets of Manhattan’s largest industrial district. No trains have run on the High Line since 1980. Friends of the High Line, a community-based non-profit group, formed in 1999 when the historic structure was under threat of demolition. Friends of the High Line works in partnership with the City of New York to preserve and maintain the structure as an elevated public park. The project gained the City’s support in 2002. The High Line south of 30th Street was donated to the City by CSX Transportation Inc. in 2005. The design team of landscape architects James Corner Field Operations, with architects Diller Scofidio + Renfro, created the High Line’s public landscape with guidance from a diverse community of High Line supporters. Construction on the park began in 2006. The first section, from Ganesvoort Street to 20th Street, opened in June 2009. 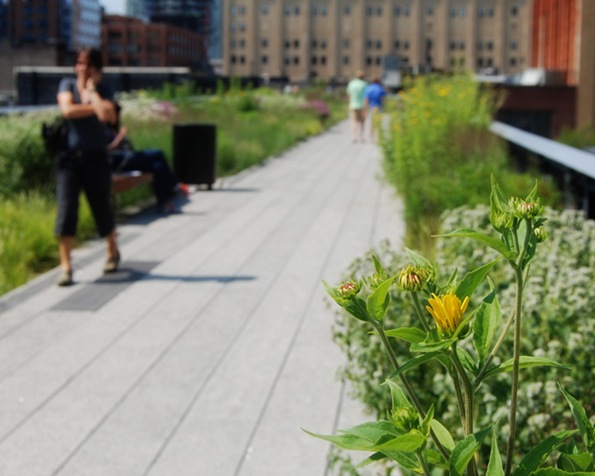 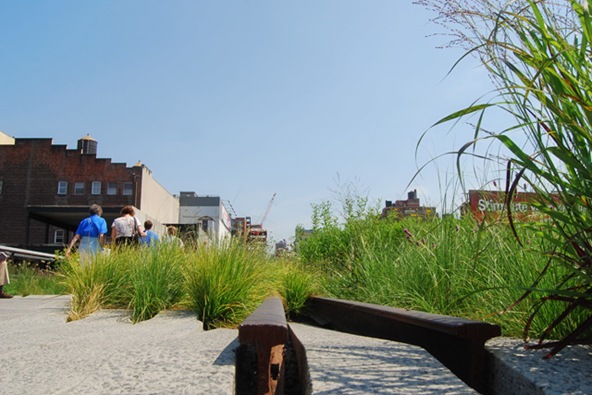 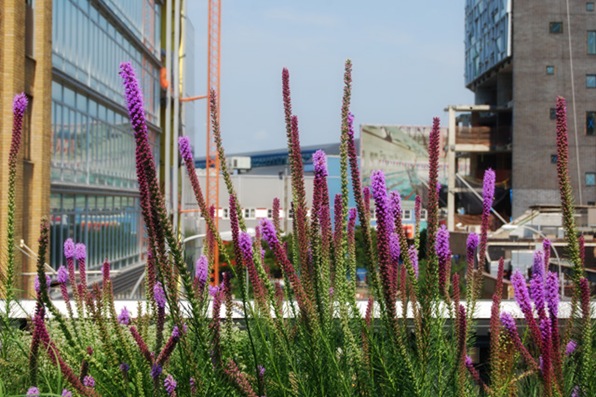 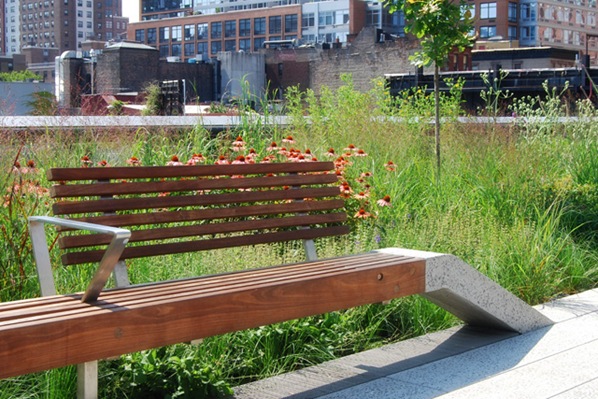 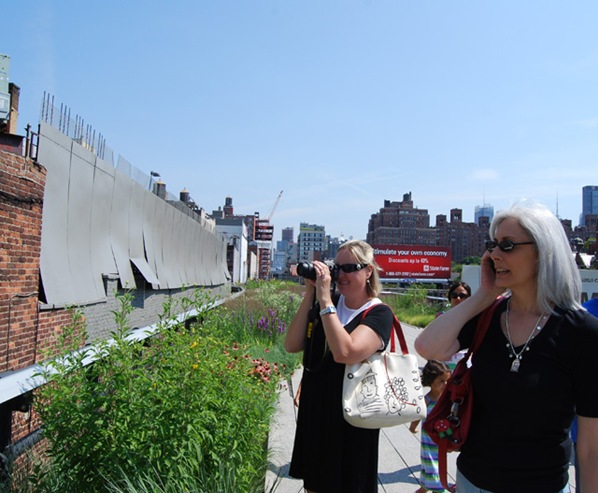 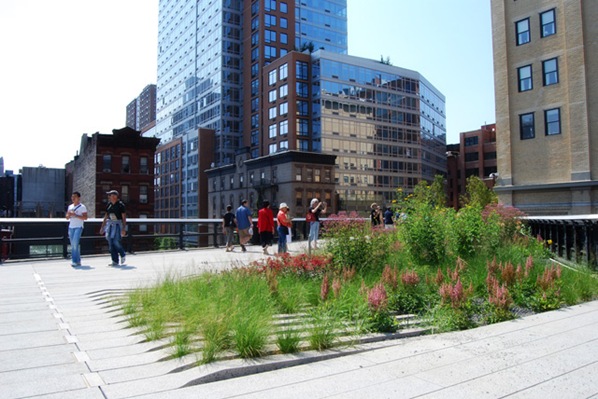 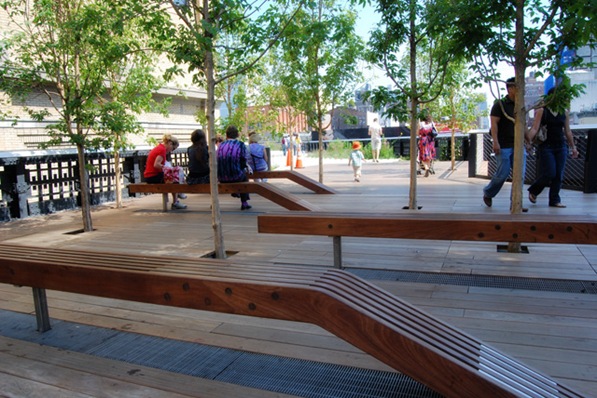 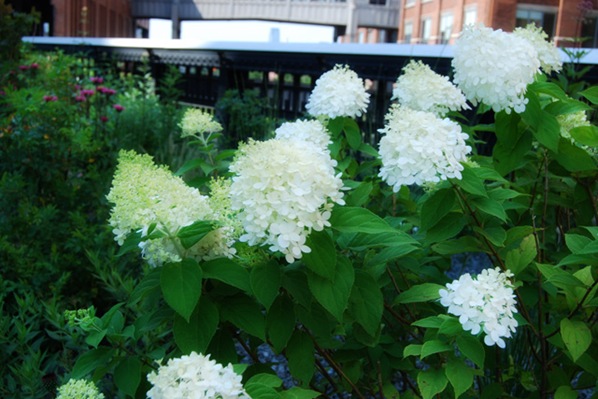 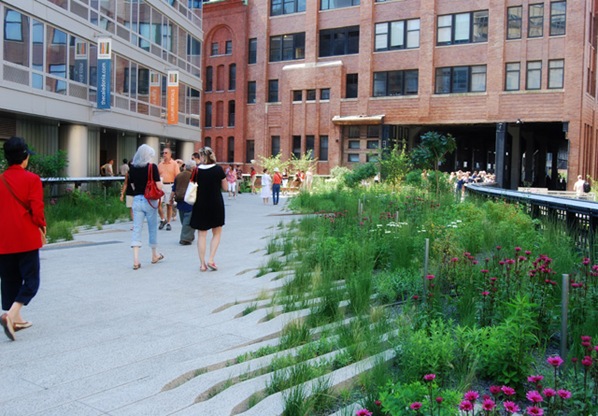 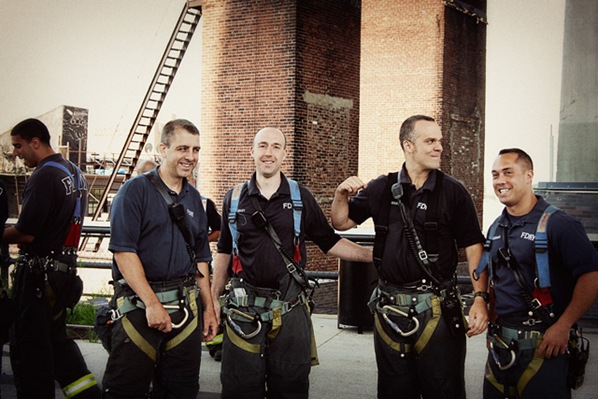 I couldn’t help the last shot.

Thanks for stopping by, my friends. Until tomorrow, then . . .

...GACK!LOL...You kill me! Postin' that fireman photo again...lol Thanks for that by the way! Nothin' like a double-dose of firemen to make ones day...*giggle* ;o)

...Wow - I love that High Line Park. That is so neat how they turned that into what looks like a wildflower meadow and those park benches look so state-of-the-art...I love that!

...And speakin' of state-of-the-art, did you see Lauren's handbag? Too cute! And I can't leave without mentionin' Daryl's hair - she should do hair commercials... You three girls have got it goin' on I'm tellin' ya! ;o)

...Anyway, thanks for sharing the photos Kate!

What a lovely way to re-purpose something that was once a solution to a problem, became the problem, and is now a beautiful solution...coming full circle!

I, too, love the sleek modern lines of the benches in the midst of the flowers that tj pointed out!

A lovely green area. It's really lovely and NO you did not go overboard with the photos at all.

Reminds me of Incredibles, with the train tracks above the city. :)

Love that last shot. Thanks for sneaking it in.

I'd never heard of the High Line Park before you posted, and it's such a great idea! Especially in a city where there is little green space apart from Central Park; what a boon to all living things. Thanks for sharing.

I heard about the high line on NPR radio, but your photos really bring it to life. And love those hunky fire fighters. Two posts with them is just okay with me. Jealous.

Ah, that is so nice that you got to meet up with Daryl and Lauren again. And to see the High Line. Sounds very interesting.

Afraid I must disagree with one of your commenters when she says that there is "very little green space in NYC apart from Central Park". The more time I spend there each year, the more I see all the lovely parks they have!! It would be strange indeed to live in NYC and not have a park nearby, I think!!! They are all unique and wonderful, and very much appreciated, in their own right!

Good on you Kate! Thanks for sharing these with us!

That is such a neat idea -- like a green ribbon threading through the city! Oh, and I think you should make a calender of the firemen photos. ;)

Oh what great shots .. I love the perspectives you chose .. and I am SO laughing at me on the phone .. explanation needed .. a dear friend called to ask about going to Polished Beauty Bar (where I get beautified™ .. clearly it was a very important call ...

Never too many pix of a great day spent with fabulous women!

OMG! Those firemen were sooooo adorable.

Your pictures are so nice. It's great to see the world from so many perspectives!

Love that they took that area and made a garden.......gave me some ideas! You take such wonderful pictures!

In Chicago, we call the elevate train the "el". Love the photos...

So lovely - since I can't imagine living in a place with no flowers, this is wonderful to me!

You really do go for firemen, don't you!
I hear so much about this High Line - it is a super idea.

Ahh! Your shots make the city look beautiful! Firefighters are awsome and hot! :) My Dad was a firefighter for 25yrs, I always though I'd marry one, who wouldn't! Lol! I married a teacher, he is awesome too. I love your photo tour :)
Jessie at Blog Schmog

What great pics! I just saw yours over at Daryl's blog. Looks like you all had a fun time.

This is truly wonderful. I had no idea it was there. Thanks for the tour. I'll be sure to take a peek next time I'm in New York. Firemen are always welcome.
xo-jj

Let me know when you post some High Line photos. ;)

Enchanted. I love it when gardens are created from old junky lots or in this case an outdated mode of transportation. Beautiful. Those Hydrangea were pretty too. I wonder what kind they were? Thanks so very much. Love the signs on the newest post too.

So smart, revitalizing old spaces as gardens. And that last candid shot of the firemen...so full of man foolery. I love it!

Absolutely love the DOF in the first shot. Brilliant.

Of course, it's already uber-cool that I get to meet you in person soon, but it appears you are a shutterbug too! AWESOME!

Looking forward to next week!

Thanks for the trip to High Line Park. Glad to see you out enjoying yourself. And we reap the benefits! XO

Someday I will visit that High Line garden. Absolutely beautiful photos! And the firefighters?! Icing on the cake.

I see flowers
firemen
and DAryl!!