I wanna be a part of it

I’m becoming quite the traveler lately with my frequent visits to the city. I left Maryland very early yesterday morning to meet Lauren at Daryl’s place in NYC. Daryl wanted to show us the newly opened High Line.

For the first time in my life, I rode in a taxi. There’s even a tv in the back seat. 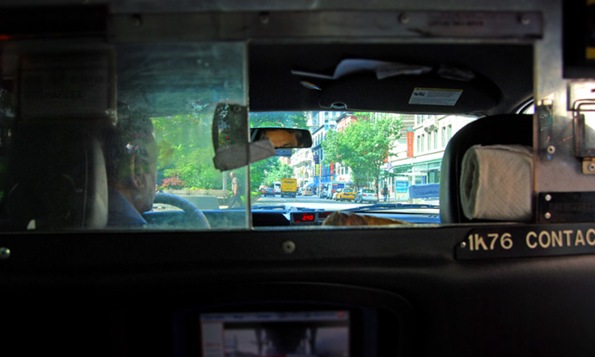 The High Line is a unique elevated park that just opened a few weeks ago. Lauren just e-mailed me and told me that it’s featured in today’s New York Times in the Style section. [Click here] and then click on the multimedia link “On the Street / Elevated”.

I’ll post more of my High Line pics later this week and tell you a little about it. But for now, here are a couple of glimpses. There’s Lauren in the background, there. 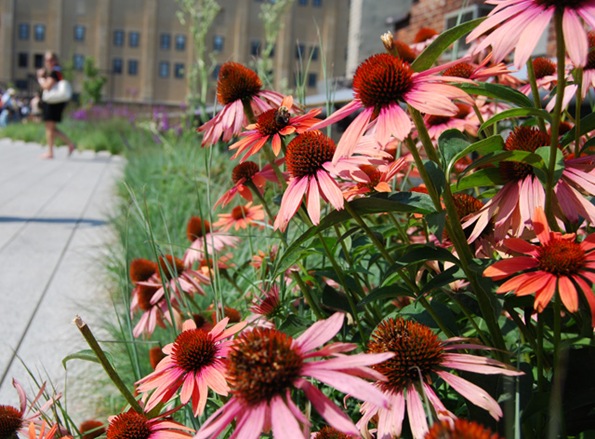 The park is on an old train line that ran above the city for years. We’re almost at the end of the line in this shot, and you can see Lady Liberty in the background there. She’s far away and very tiny, right in the center of the photo. 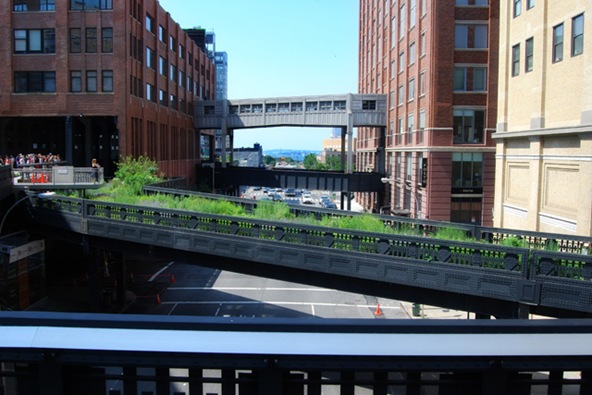 Here, I’ll point her out. There you go. 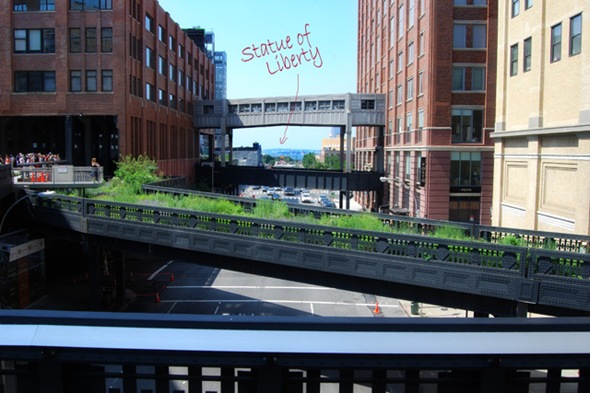 I also got an added treat. I’m not sure you know this, but I’ve got sort of a thing for firemen. For some reason, there was a small congregation of them (be still, my heart) having a pow wow here at the end of the Line and some of them graciously let me take their photo. 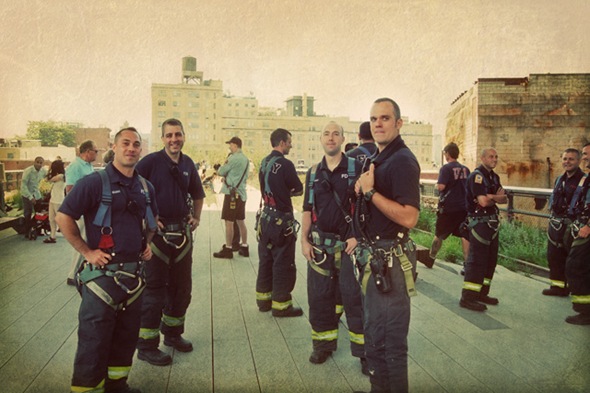 We visited several shops and boutiques and had lunch in a really cool restaurant that had a courtyard in the center. Afterwards, as we strolled through the West Village, Lauren pointed out a pet shop and suggested I buy a birthday gift for my favorite best friend.

So I went inside and picked out this cool turtle that I know Maria of Gardening With Turtles would really love. 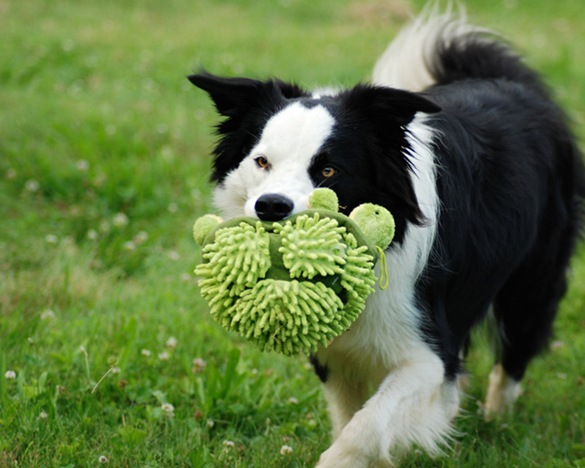 And George really enjoys his new present. When I arrived home around 6 pm, he ran to the car to greet me, jumping up and sniffing the bags I’d brought home. He sniffed out the birthday bag and wanted at it, as if he knew it were for him. (I don’t make this stuff up, you know). 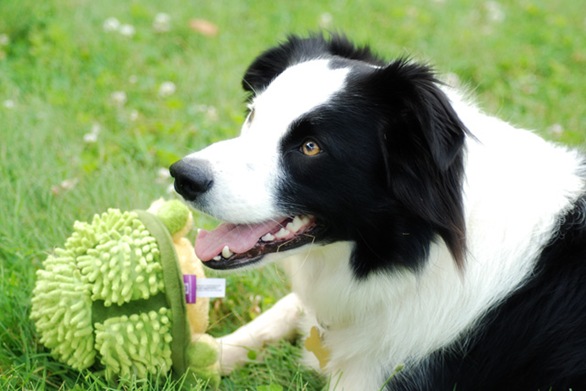 We had dinner al fresco and a game of fetch the turtle at the same time with the birthday boy. What a great day!

Oh, and here’s something funny. When I arrived at Daryl’s apartment, she re-introduced me to her husband (the famous Ray of Toonsday Husbandisms). He shook my hand, saying that it’s so hard to keep track of all his wife’s friends but good to see me again.

“Honey,” Daryl said, “You know Kate. She’s the one with the dog. The border collie you like.”

I swear, my dog is going to have to start his own blog.

PS ~ To all those who were saddened that George couldn’t go with me on the ride in yesterday’s post, please know that he was more than happy to have stayed home that particular day. My husband played with him practically the whole time. When the weather is hot, I can’t take him in the car if I’m going to be inside for any longer than just a few moments. Not good to leave pets in a hot car!

UPDATE: The statue I pointed out looks exactly like the Statue of Liberty (especially when viewed large in my PS2 program), but unless she got her island to move up the river a ways, then it couldn't be. A gentleman taking photos pointed it out to me and I happily clicked away, thinking it was. Thanks, Daryl and Ray, for straightening me out!

Wait- I thought this was George's blog?

for the first time in your life you rode in a taxi? seriously?

Bumpkin on a Swing said...

The Bumpkin has a special place in her life for NYC firemen, and wishes to steal picture for future inspiration............

Thanks for pointing out a new and interesting spot to visit in NYC. The photos are great, as usual.
Love the toy for George... he's a lucky guy.
My daughter is pretty much known by her dog also... if you want to take a look her blog is:
www.chappysmom.com
Thanks.

...For future reference, when posting photos of firemen please place the photo at the bottom of your post. It was hard to concentrate on the rest of your story after the fireman photo, I'm just sayin'... ;o)

...You girls are just too super-cool! I wanna live near you guys, dangnabbit! *pout*

...I'm with 'Marla' up there, I thought this was George's blog too and that you & dear husband were just kinda along for the ride...*hee,hee* :o)

Highline looks beautiful! I'm so glad y'all enjoyed yourself.

I know there's times I can't take my little dogs either. The Old Goat says that their hearts are broke for a solid two minutes until he starts playing fetch with them!

JUST finished reading that section in the NYT Sunday Styles! Next time you feel like a road trip you should visit Philly.

I LOVE the firemen!!! Very cute.
And I get ballistic when I see pets in cars in the heat.......so bravo to you for leaving him home....besides, your husband would have missed him.
Love his new toy, and I believe you.....Eddie ALWAYS knows that there is something in the bag for him.

Firemen. And George. :) It just does not get any better.

I love the idea of reclaiming that area as a garden - I had read about it when it was in the planning stages in one of my gardening mags. Nice to see some in person photos of it!

And I know what you mean abut George - Riley threatens to take over mine on a regular basis.

I'm sure you had a very exciting trip, -In a cab...
about George your right It's hard to left a pet in a hot car
even he misses a ride with her mom I'm sure he's dad took care of him in the whole day....

I have a dog like George - bring a bag into the house with something for her and she knows! I have seen the high walkway on About New York blog - isn't it a good idea?

George is definitely a star. Like your George, My doxie, Oscar will always sniff out a new ball. He just knows!

Can't wait to see more High line and details from lunch with the girls! I am so jealous!!!

well george...we love your blog ^..^
lucky you getting to take another trip to the city and see the high line up close and personal.
so enjoyed your pics.
have a wonderful evening.

Bless your heart for posting that fireman picture... Hell-o FDNY! "Be still my heart" is right!

Thanks for the pointing out the Statue of Liberty. My old eyes needed the help.

And I can relate to having a dog steal all the attention.... ;)

I guess I shouldn't have sprung that firemen photo on you just like that.
Yes, I guess this is George's blog, after all!
You're welcome, Frank. And tell Benny that we said hello.

Darling, that cant be the Statue of Liberty because she's in the harbor and you were pointing to the Hudson and NJ .. and we werent in thew West Village we were in Chelsea ... I had no idea that was your first taxi ride... amazing ... xoxo

It's NOT George's blog? Seriously? Have you told him?

Isn't it amazing how every time someone visits New York City it looks different? Amazing - a garden on a railway line... what will they think of next?

Glad you liked my silly pooch pantomime (bet Axel wishes it was all just play!).
:-)
BB

I sure enjoyed the NYC shots, but the firemen shot was wonderful. Something about them...

Thanks for the bit of help in your comment. I followed real good until you said something about coding your html....I'm working on learning but some days it is harder to get into my thick skull.

Thanks for your help. I'll let you know.

Fun post and photos. I'm glad you had such a good time. Bob and I seem to go to NYC every couple of years, we love it. Love the taxis and this time, we rode the city buses. What fun that was. Try it next time.

Cool! I saw a piece about the Main Line on CBS' Sunday Morning a few weeks ago. Your photos show it off even better!

HAHAHAHAAHAHA. I was so absorbed reading about your adventure in NYC (I have never been there, shameful, isn't it?) and then I find my name in your post!!! Oh George, you go ahead and try and take that turtle down. It can't be done. Ha ha ha ha.

Um, and those firemen were extra handsome. :-)

I think that man was flirting with you and thought he was impressing you with his knowledge of the city and the river .. anyway it was fun sleuthing out what that really is .. still dont know .. Ray thinks it might be a statue of Frank Sinatra since that is NJ over there and according to the map he Googled, there's a Frank Sinatra Park right there... really .. you know Ray he would never kid ..

I loved the pictures of the park Kate. I've never been that far up in the city. I also wanted to tell you I finally made the watermelon salad this weekend.. All I can say is SLAMMIN. I loved itso much that i had it both sat and sun. thanks again .

Fantastic photos.. I feel like I was there with you on your FIRST? taxi ride. Wow.. that amazes me. How neat to experience something like that for the first time with such cool friends. :)

George is the only blogg character my husband follows, except for ME! LOL