In November of 2006 as I was watching a news program one evening, a segment came on that was comparing three digital photo album companies. Back then I was still using my first digital camera, a little Sony Cybershot I’d bought after reading a review. And I thought a photo album would make a great present for someone.

The news program was comparing Kodak, Snapfish and Shutterfly. They showcased stories of three women who had each volunteered to make photo books using the three companies. Camera crews filmed each of the women as they progressed from taking the photographs, to uploading them and then designing their books online.

After everyone received their albums they got together, along with several people from the news program, to review the products .

For ease of use, all the companies were voted about the same. But Shutterfly won the comparison due to its overall picture quality.

So I went online to investigate and that holiday, I ended up making my first photo album and gave it to my in-laws as a gift. Everyone in the family was impressed and my mother-in-law actually called me the next day to tell me again how much she loved her present.

Since then, I’ve made several photo books using Shutterfly, but I’ve also tried other online digital processing companies just to see what they were like. In all, I’ve used Shutterfly, Kodak, Blurb, Lulu and Snapfish. I never ordered the book from Lulu because I was so annoyed with the entire process that I ended up calling their customer service. Recently, Pioneer Woman offered a photobook contest using Snapfish and that’s when I tried out that company. I wasn’t planning on ordering my entry for her contest but Snapfish ended up offering half price to readers of PW’s site, so I bought two of my books and when they came, I gave one to my mother-in-law for Mother’s Day this year.

I wasn’t very impressed with my Snapfish book, though. (And my mother-in-law never called me the next day to tell me again how much she loved it.) So when it came to recording our big Road Trip last month, there was no other choice for me but Shutterfly.

Let me show you some of the album: 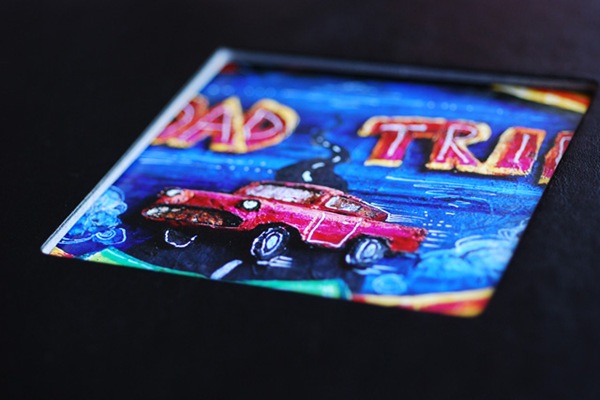 I ordered a 12X12 photo book and an 8X8 copy to send to our friends as a gift. The copy was a breeze to make. I just clicked on “make a copy of this book” and voila! I adjusted type in several of the pages and within minutes, the copy was finished. The book arrived less than a week after I’d ordered it and it is beautiful. 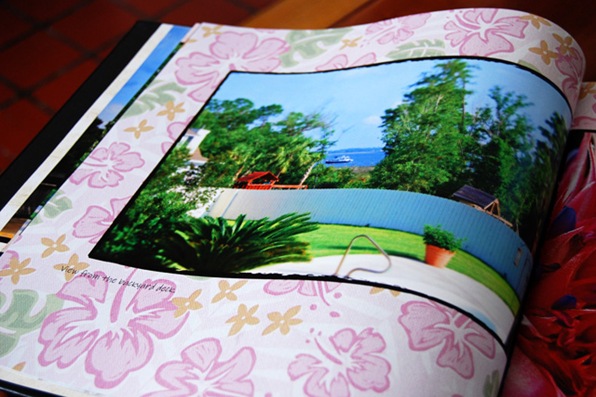 I love all the choices of page backgrounds so I went a little crazy. Normally my photo books are pretty quiet. 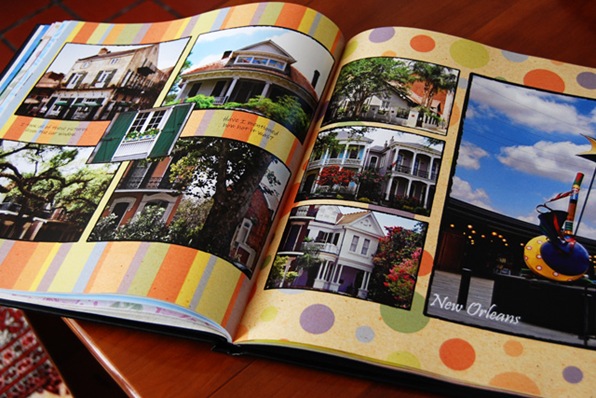 I uploaded my images at full size and it was a snap using the bulk uploader. I’m so familiar with the program, it took me very little time to design this book. 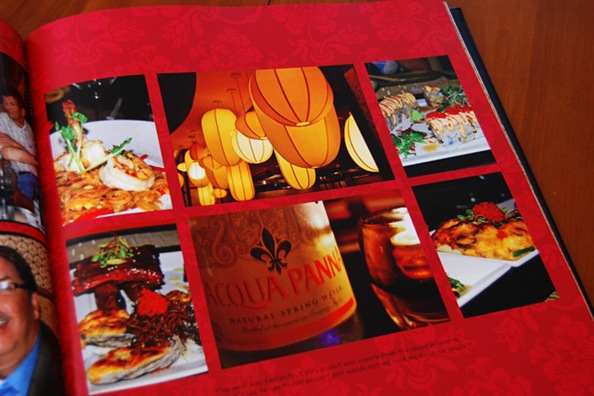 There are so many choices for backgrounds, page layouts and even photo borders. 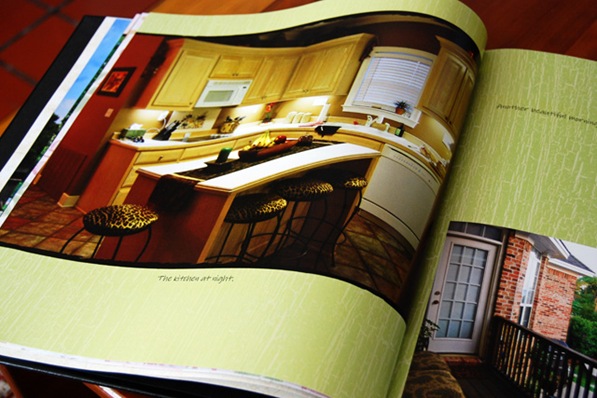 The colors and image quality of all of my photographs are spot on. 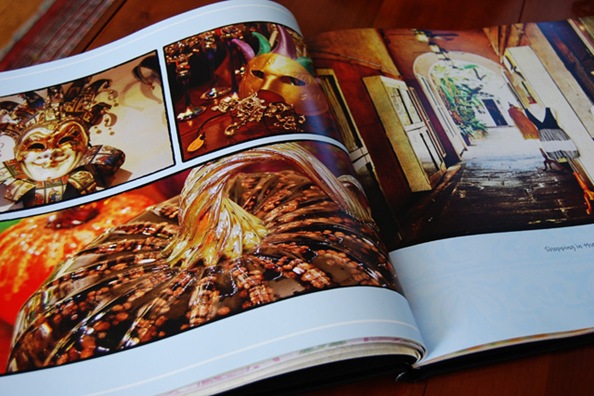 When the book came, I actually got a little teary-eyed because it was so beautiful.

Nah, not really. But I was smiling wide as I turned each page. 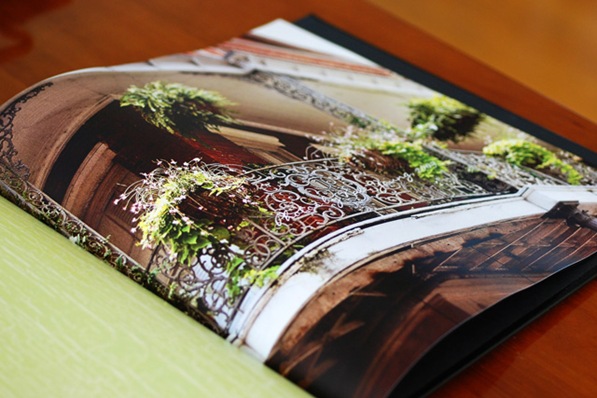 My friends called to say that they loved their book. And do you want to know what my husband said about it? The only thing he said about it?

“There’s only one picture of George in the whole book,” is what he said.

Kate.... the book is amazing!! I don't know anything about digital photo albumns.... thank you so much for sharing this. I'll bet your eyes welled up just a little...

Your hubby is such a man. Had to laugh at his comment though! ...but my question is: "why not a pic of George?"

Beautiful book! Love it.....I have to check out Shutterfly, in my spare time!
I also really liked the quote about a dog's faithful nature. That's one to remember.

That's freaken gorgeous! I'm wondering if they're expensive? I'm thinking they're not crazy because I know you. You like fine but not foolish. I'll look into it!

He's got such a one track mind - at least as far as George is concerned.

I paid more for this book than any other I've made. Usually I get a book with about 20 pages and a regular cover. It costs about $35 or so with shipping.
This book was for a special memory. I have no idea how long my husband or another person in this book will be with us and as I added page upon page, and a leather cover, and an 8X8 copy, I admit it was costly.

The books is absolutely gorgeous!
But then again, the pictures were taken by you...

I had to laugh about the husband but I would have sighed too.

this is beautiful but I'm sure that "in person" the book is even more beautiful.

Have you tried blurb?

The book looks awesome. I am very impressed. I did not even know you could do these sorts of things. Wow. I might seriously have to look into making one for my own photography. I have heard of web sites where you can make coffee table books. Is what you made basically the same thing. Can you provide more information about the whole proccess?

Kate, that is absolutely gorgeous! What a great idea.

You are talented, kiddo!!

Wow..well done Kate...it looks fantastic, and as you say, what a memory!

Now all you have to do is make one of George to keep hubby happy. I am sure it is already a little idea in your creative brain for christmas or birthday, or anniversary, or for no reason!

You have almost sold me on the idea...she who hand makes everything!

What a great gift! The photos are displayed so beautifully. You've inspired me. Vicki

I just received photo books of a FL trip that I made and ordered from Kodak...I gave them to my sister and cousin today and they loved them...I did find some aggravating things about Kodak and will try Shutterfly next time after reading this!

Maybe a photo book of just George pictures would appease him?...Actually you could probably sell those!

Drawn to The Sea said...

The only photo book I've made was using Shutterfly, I was very pleased. Been wondering about the other services... really appreciate you sharing your experiences.

That looks so nice. I used the Snapfish discount from PW as well and I thought the ones I did came out pretty well - I will have to try Shutterfly for my next one and see how they compare.

So why is there only one photo of George? Huh?!

Next thing you know, they'll be calling you to do an endorsement!

I've never heard of this, thanks for sharing, it makes a beautiful book.

Well the only way to fix that is a book of George. Oh, and one of your husband's back;) That is gorgeous, by the way!

I have yet to dive into the photo book waters but have certainly wanted to. Your review is most helpful - thanks!

Does this mean scrap booking is dead? What am I going to do with all that paper?
Seriously, I'm very impressed with your recommendation. I'd love to get all my trips in albums, but there never seems to be enough time. This might be the solution. Thanks a million,
Laura

That turned out wonderful!! You must be so happy. I love photobooks. I used to do digital scrapbooking, but now it's so easy to just upload to a book printing company.

so you really liked the quality of the photos? I'll have to try them.

The books are gorgeous! What a great idea. And, thanks for the tip about Shutterfly.

Fantastic! I published a book with Lulu and wasn't overly impressed either, they charge a fortune for manufacturing and it's made a mockery out of the whole thing. However, I've been thinking of doing a photo book for some time now and didn't know of anywhere else to go (apart from Blurb). I'll check Shutterfly out.

From what I can see, your book is fabulous and would make an exceptional coffee table book. Really!

That really is a neat thing, your book.

Now I've GOT to make a Shutterfly photo book! I always wondered who was the best.....I thought BLURB was the way to go, but you've convinced me to use Shutterfly! The pages are GORGEOUS!!! Of course, the lady behind the camera had a lot to do with that :)

You should surprise your hubby with a book only of GEORGE!

Thanks for this review of the books! Image quality is always my first concern, but I like nice page quality to...not too flimsy. I've only ordered books that lie flat, through one of my labs, for my clients. But these through Shutterlfy look wonderful, and seem like they would be great for me, and as you've done, for gifts.
You've got a great eye for backgrounds to suit your photos. Very nice.
I read the post above as well, and I hope your husband is having some better days really soon.
~ laura

I love Shutterfly also. I did a book just of my dogs and it is wonderful. They also have great prices on all their photo processing.

WOW KATE, thats a great gift to yourself and to W's family. it's a beautiful home isn't it. i'm so glad you guys got the chance to go see them. i've never made a photo book but my friend makes them all teh time. i think she uses something called snapfish. ever heard of it? well my best to A and have a wonderful holiday. fireworks for all!!!love ya