Summer sky (and a giveaway elsewhere)

This is another of the surprises that awaited me on the camera card the other day. My husband must have taken the shot on Tuesday or Wednesday of this week. But it wasn’t until today that I began feeling a creative urge to do something with this big blue sky.

Besides, a blogging friend had just sent me a group of textures she had created, and I was keen on using one or more of them right away. 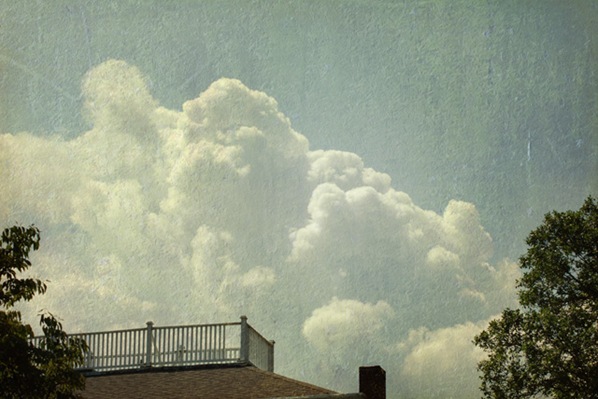 For this shot, after I adjusted the original to my liking, I added the new texture (below) that I just received from Dlyn. It’s called Rusty Paint. I used the hard blend mode, opacity 36%. I wanted something else around the perimeter, so I used this overlay from Florabella called Tea-Stained. I set the blending mode to soft and the opacity to 47%. 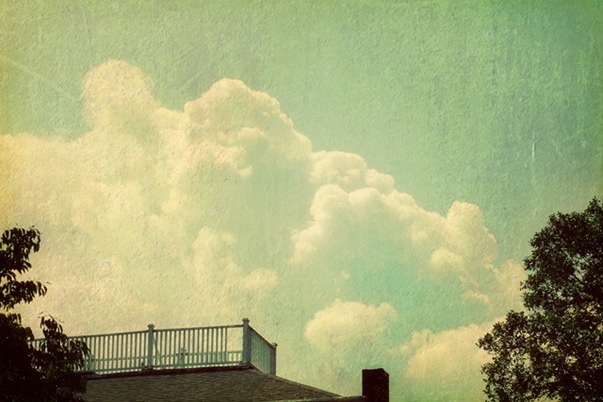 And because I wanted something completely different, I decided to run Pioneer Woman’s seventies action on the photo before I used the very same textures. I used the same blending modes but for the overlay, I set the opacity to 79%.

Sometimes I just like the original photograph. But I wasn’t in the mood for that today. I was looking for something else and I feel that I found it.

Please don’t get the impression that I know what I’m doing here. Maybe my hand was too heavy, I don’t know. How and why I choose what I do is a mystery even to me. There are too many choices but basically I just start fooling around. And then things begin to develop. A good rule of thumb for me is to walk away and come back later. Sometimes I ask myself what in the world I was thinking!

As an aside, things are just a little better today and that’s all I have to say about that. Thanks to everyone for your well wishes.

Go to Jenni’s blog before Monday to register to win a CD from someone you may already know. Well, somebody you would know from the blogging world, I mean. Readers who are familiar with Pioneer Woman may already know who Rechelle Malin is. She’s the Country Doctor’s Wife and until this morning, I had no idea that not only could she sing and play guitar but that she has a CD out (and you could win a free copy).

Happy Independence Day everyone! And until tomorrow, my friends . . .

The photos are great! I really like the enhancements you used.

I'm still working on learning that whole "layers" thing. It's a beast!

I love how that turned out, Kate! Aren't those Florabella textures fun? Love the new header, too. Can you tell me what the dimensions are on that, in pixels? I can never get it the right size.

I love what you have done with the sky in the first two pictures. It looks exactly like a Winsor and Newton ultramarine blue wash on Arches 300 lb. watercolor paper! I love that effect...!

I like the changed photos as well, as opposed to the original. It is very reminiscent of some photos I have from the 70's...1975 to be exact...the ones that use to have the little scalloped edges.

I completely understand your process...I use the same thought when creating. I never know what a fabric will become until I sit down and start playing...I let the colors and shapes speak to me.

Great picture. It must be nice finding surprises on the camera card.

Your photos of George are wonderful, Border Collies are great !!! Although we don't have one ourselves, I took a series of photos of one a few months back in Brittany, France, which I just posted on June 10th... if you have a second, please show them to George, I'm sure he'd get a kick out of seeing one of his French cousins in action...

Also, if you haven't been there before, there's a nice French dog blog at "Riviera Dogs", link is in my sidebar, great canine portraits there, George might like them too... Cheers, owen

Great adjustments to your photo.

That looks so nice - love the aquamarine color of the sky and glad the texture worked. They are still a puzzle I am working on. :)

Great edits! :) I am loving the Florabella right now too.

I really like the second version. I love the clouds and I love Ree's 70s action. I wish I could afford the Totally Rad Actions but I make due with what PW gives for free. :)

You always have a good captured, and i envy you for that.. LOL
Hi! to George and have a nice time

i dont usually like pictures that have been fiddled about with too much. but this one i do :)

I love, love, love the new header and the soft, cool colors in a hot, humid season. Perfecto!
As for the other stuff, you are speaking Greek to me.

Have a happy 4th. I love your pictures

Kate~
The textures are fantastic! Thanks for sharing. I've never used them but I plan on testing them out now! Did you have a link for the "tea stained" texture? I'll go back and look...

Aren't those florabella textures amazing?? Thanks so much for taking the time to visit my blog and for the kind comments!

Actually I think that you do know what you're doing. :)

Playing with textures is like having textiles in the hand. It's sensual.