I have been accused several times by a co-worker of being hoity-toity. And to that I say, “What! Me? You’ve got to be kidding!”

This time it’s because I like cucumber sandwiches, of all things. I was telling him and another co-worker that I’d had them when I went out to lunch the other day. And that they were really very good. 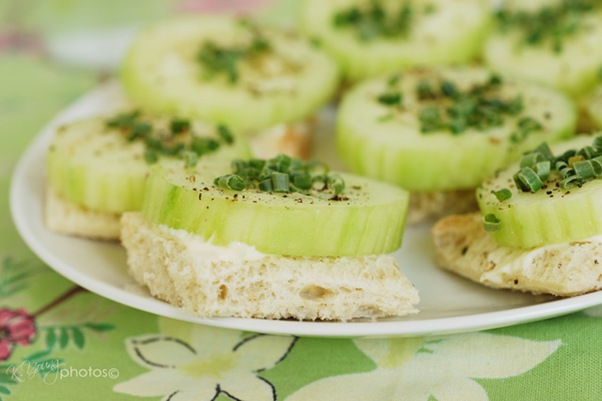 They’re very simple, too. And I don’t mind being teased just because I like something.

In the summertime, I work ‘summer hours’ which is 8-1 daily. It’s a pretty sweet deal and was actually a huge selling point when I took the job over ten years ago. It only lasts two months, but I love those two months. The school is basically quiet and there’s a lot to accomplish as we close out one year and prepare for another. And if I want to take a Friday or a Monday off, I just work extra hours during the week to cover the five hours that I’ll miss on the day off. 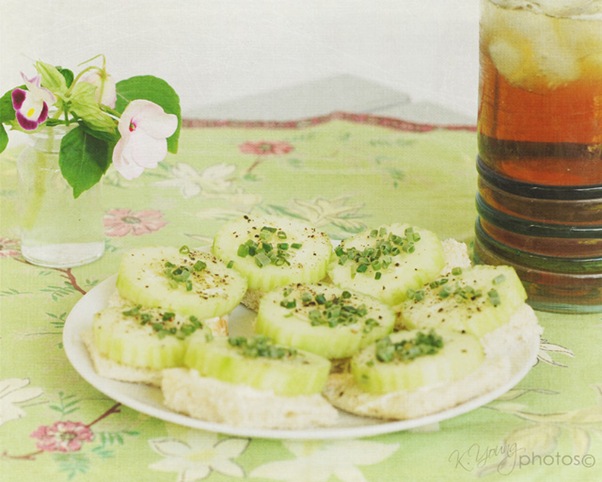 I don’t eat much when I’m at school, usually a small morning snack and a very light lunch. So when I come home, I’m a bit hungry. (Or as my British MIL says, ‘a bit peckish’). And today to appease my hunger, I had these wonderful little cucumber finger sandwiches, along with a glass of freshly made mint iced tea.

To make these, choose a good-tasting bread. I used Pepperidge Farms’ Oatmeal because it was what was in the breadbox. Slice off the crusts and cut the bread into 6 small squares. Smear a small amount of mayonnaise on each slice, place a cucumber slice on top and then sprinkle with salt, pepper and chopped chives. 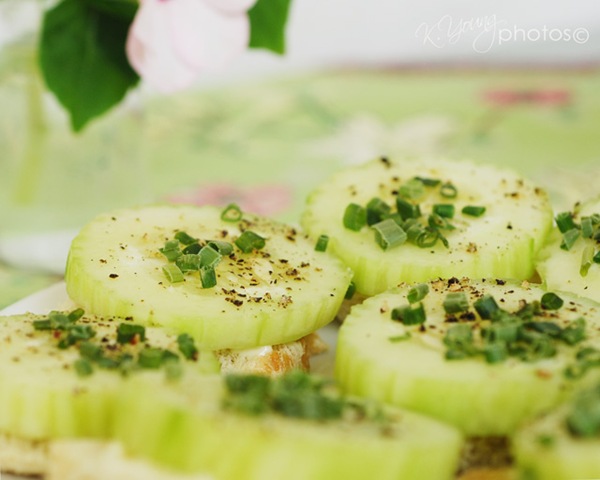 I’ve always liked to score the pared cucumber with the tines of a fork. I think it makes it look better. And if that makes me hoity-toity, well then I will just revel in it. 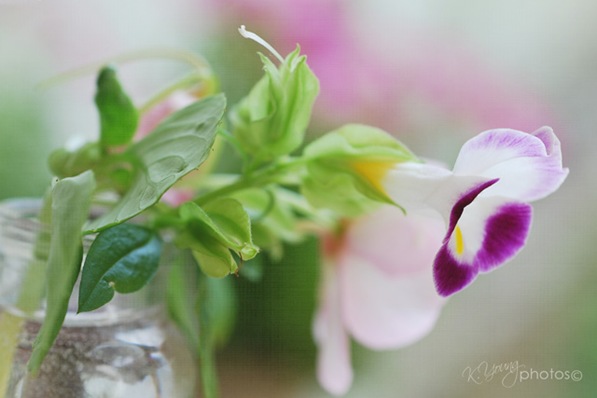 I think I’m pretty simple, though.

And it doesn’t take much to make me happy.

To all those who guessed ‘You’ve Got Mail’ for the movie quotes in the post below, you were right. Yeah, I like that movie too. Here’s one of my favorite scenes, at the very end of the movie.

Love cucumber sandwhiches!! Only these days I have to remove the seeds or buy the seedless cucumbers at Costco!! Hoity Toity or not.... they are a great summer sandwhich! Pretty pics of them too!! Mouthwatering.

Me too on the cucumber sandwiches and You've Got Mail :)

I love that you take time to score the cucumber even if you're the only one eating them. It's a small luxury that shows you take care of yourself. Hoity toity? I think not.

my favorite cold tea is earl grey...it is heavenly. just finished a nice tall glass before coming inside this evening.

have a great thursday.

Hey, Miss Hoity-Toity -- do they know that you like Rescue Me, where the language alone would make a real uptight miss faint in horror?

Your sandwiches look wonderful, but that iced tea is REALLY calling my name... I'll have to make some tomorrow. :)

My mother and grandmother both love cucumber sandwiches and they are far from hoity toity!

They look delicious and the photos are wonderful. I love all those summer shades of green. I bet they'd be pretty yummy with Tzatziki sauce in place of mayo... for the next time you're a bit peckish (Frank says that too and he's all-Canadian). ;)

oh, I love them!! what a great snack - we should all do something so simple instead of fat stuff.

Oh...I so love that movie! while I was waiting for it to load, I recited the words outloud. They don't make movies like that anymore!!!

Cucumber sandwiches? I have never had them, but I have 2 cukes in the fridge. All I need is some cream cheese and the green stuff...chives.

Sleepless in Seattle just kills me!

Great looking snack. Looks delicious. But that video is going to make me cry. I love happy endings.

Do you point your pinkie when you drink your tea? We must commiserate sometime - my MIL is from France and is a bit "hoity toity," in a French kind of way.

I almost forgot - I had wonderful cucumber sandwiches at Winterteur.

My English mother says that...."peckish".......too funny, isn't it?
When my kids were little, I used to make cucumber sandwiches, a little mayo on one slice of bread, and a little peanut butter....yes, peanut butter, on the other slice.....some salt and pepper. YUM YUM.
My youngest daughter still loves them.

I don't think that a person's taste buds determine whether a person is hoity toity or not. The cucumbers look so summery and yummy too.

You're makin' me hungry! I admit to loving cuke sandwiches also, but for some reason I just don't think about treating myself to them very often. Well that, my dear, is about to change - thanks for the delish reminder. (Love YGM also!) - tw

This post made me randomly think of this word: Foodtography. haha. I have a strange sense of humor, but when your blog made that come to my mind. I just had to burst out laughing.

Over here in VT, our cucumber sandwiches look more like two slabs of bread with a touch of mirable whip, cucumber slices, salt and pepper. I know...I know...BORING :)

Your cucumber sandwiches are not hoity-toity to me...in my words I would say Fan-ceeee that.


I always enjoy visiting you!! Always.

what fab working hours you have! we have one month every year when we work 9 - 1, but other than than it is the usual 8 hours (or more). i love that you are able to free up days by working extra hours.

Oh goodness. Sounds like envy to me. As to the cucumber sandwiches...love 'em! But, there's not much food I don't love, thank God. It doesn't pay to be picky, especially when one travels.

Never could feel the love with cucumbers...but your photos almost make me feel like I should try them again as a sandwich!

We had cucumber sandwiches sans bread for an appetizer last night. I used the cucumber as the bread and topped with laughing cow cheese and pinenuts and blackberries. I guess I'm hoity toity-er than you are! Plus I don't think hoity toity people stick hair in their ears when they're driving. p.s. I started a blog!

Summer = Cucumber Sandwiches or tomato sandwichces which ever I can get my hands on first.

Revel in it, baby girl...revel all you want.

I love cucumber tea sandwiches! And they must be scored with a fork or they won't taste right;)

I love cucumber sandwiches, mom made them just like that. I loved them so much I used to make large sandwiches, sliced the cuc length wise and put it between 2 full pieces of bread & I would use ranch instead of mayo.

Oh I am now faklempt and wanting to watch that movie again .. BTW .. those are the Riverside Park Community Gardens ... we must walk up there on Saturday if we have time ...

You are not hoity toity but cuck & mayo sandwiches dont appeal ..

Hoity-Toity? No, you are just paying attention to detail. Looks yummy to me!

Hmmm - looks like cucumber sandwiches will be on the menu for lunch today :)

Bring on the hoighty-toighty...I love it!

Cucumber sandwiches sound so posh! They remind me of wedding showers when I was younger and everyone dressed up for them. They sound really good right now.

I realize I am alone in this, but I HATED "You've Got Mail"!!! Talk about bbbbooooorrrriinnggg... longest week of my life the 2 hours I watched that. And I love Meg Ryan and Tom Hanks - I mean, Sleepless in Seattle says it all. But in this movie, I really, really wanted it to turn out to be the dog that was sending the emails just so something would actually HAPPEN! Of course, I really hate Raymond too, so I'm probably just strange...

Oh gosh...those look good! I love cucumber sandwiches and they are perfect in the summer! You just inspired me :)

I never thought of adding chopped chives Kate - and my garden is full of them - so next time I shall try it. Thanks.

Yea for cucumber sandwiches - I love them! I also make mini smoked salmon sandwiches too.

Hey, all. Thanks for the cucumber kudos. That's funny . . .
Earl Grey iced tea is on my list to make, VA Good Life. Thanks for that.
Ellen, of course I don't point my pinky finger. I am really not the hoity toity type. I mean, I watch Rescue Me like Mary pointed out, for heavens sake.
Tzatziki sauce, Hilary? Must google this concoction.
And I guess you could call it Foodtography, LouDuk. Sounds fine to me. And Rosezilla, to each her own is what I say. I get misty eyed watching Die Hard, too, so go figure . . .

Have loved cucumber sandwiches forever. Jackie Kennedy's favorite too (with watercress!). Never do see those in SW Virginia though!
And "You've Got Mail" was so-o-o magical. That clip made me cry----again!

Ummmmm, I do cucumber and tuna on toast and it's fresh. Some cilantro on that would be even nicer.