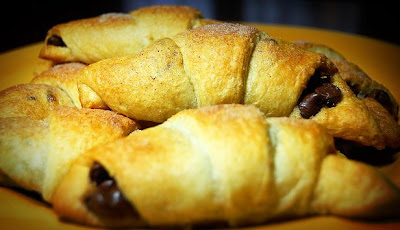 The skies are cloudy today and it's downright cold outside. I had all this gardening planned, but the wind is gusting so much and honestly, I was looking for a good excuse to stay inside and vegetate. There's so much grass to cut with all the rain we've had lately, and our youngest son offered to come over and help with some of the mowing on the farm. My husband is making a nice Mother's Day dinner and because our son's outside, mowing for hours on end, I'm going to make his favorite dessert.
I discovered this recipe after my eldest son returned from a school-sponsored trip to Paris, France. He told me he had eaten this wonderful breakfast treat every morning and it was called pain au chocolate, which is bread with chocolate. I searched on the internet and finally found a recipe but it took me half the afternoon to make a batch of the little suckers.

While we were enjoying these blissfully delicious concoctions, I started thinking that there had to be an easier way to make them. So the next time, I substituted Pillsbury crescent rolls and switched to semi-sweet chocolate rather than the milk chocolate the recipe called for. I've found that the Ghirardelli brand of chocolate tastes the best and the rolls tastes better if you use the regular version, not the low-fat.

These quickly became my signature treat at school, and whenever goodies were called for. They're easy and fun to make, and kids really enjoy making these.
Pain Au Chocolate 1 container Pillsbury crescent rolls 1 cup Ghirardelli semi-sweet chocolate morsels about 1/3 cup sugar 1/2 tsp. cinnamon
Get two small bowls. Put the chocolate morsels in one and mix the sugar and cinnamon together in the other. Open crescent rolls and line about 4 of them up with the triangle top pointing away from you. On the bottom end of the triangle, put about 1 Tbsp. chocolate morsels, pressing them gently into the dough. Sprinkle about 1/2 tsp. sugar mixture on each and and begin rolling up from the bottom towards the top. Sprinkle sugar mixture on top. Bake according to package directions, 375 degrees for about 12 minutes.
You'll have about half the sugar mixture left over. Just put in a baggie until next time. My husband likes these with less chocolate. So try them, and judge for yourself. Your hips will thank you.
These are best eaten warm. Wear shoes, because your socks will surely be knocked off.

WOW...I am soooooooo going to make these!!! Thanks sweetie for the recipe! Hope your Mother's Day was Fabulous!

These look delish! Maybe I'll get my daughter to make some - she loves to bake and is taking home most of the baking pans etc. today. I wonder what she'll make first...I bet it's chocolate chip cookies. :D

Ooooh! Crescent rolls and chocolate chips; what could be easier or more appetizing? If Pain au Chocolate tastes as good as it looks, it's probably sinful! Thanks for sharing the recipe. Hope you had a lovely Mother's Day.

These sound really good - but I will probably eat all the chocolate before it can bake!! I guess that is why I am a better eater than baker!

I laughed when you talked about your son mowing for hours! I can relate to that! I think having a large lawn is a bit crazy especially with the cost of gas. I think it would be nice to have more gardens and shrubs and less grass. But I confess - I still love the look of a nice lawn so I guess I will spend hours and hours riding a lawn mower again this summer!!

Take care and, seriously, that recipe is excellent!

Oh jeez, now I have to go out in the rain to get crescent roll mix and choc chips! :)
xoxo,
Mary

That looks simple and delicious - my 2 requirements for any dessert I make.

Oh yum! Ghirardelli is going to get a workout in blog land this week - my recipe for later in the week includes those very same chips! ;)

Now who would have ever thought of combining those food stuffs together. They sound wonderful and would be a treat for sure.

oh, my gosh! Quick and easy and chocolate! My favorite kind of recipe. Must try this one out...

I had to laugh when you said to use the regular, not low fat version of this. I didn't even know they made a low fat version. That is how "into" watching my girth I am. These look fun to make and of course if they could knock my bum off instead of my socks I would eat them tonight.

Happy Mothers Day....hope it was wonderful.

This one we will try.

Wow, you have a lot of readers!
And, OK, those look delicious!
You should try chocolate between two pieces of French or Challah bread, dip in prepared French toast batter, pan fry, then dust with enough powdered sugar to make it look like Winter. Oooohhhh...

Thumbs up from the Griffitts' family...I made them this morning!!! -Lori

1. I have not bought Pillsbury Crescent Rolls in 25 years.
2. Which means I am apparently as old as dirt
3. I am too much of a snob to purchase them
4. But I did last week
5. Because of PW's Apple Dumplings
6. Which I have been promising to my husband for a month but it took me a while to overcome items 1 and 3, above
7. And now I have to get another pack for your Pain au Chocolat.
8. Foodie snobbishness aside, between you two I think Pillsbury's stock is gonna rise like the rolls....
9. Who the freak knew!??!!!!
Thanks, KT

Technically it's not pastry dough.... but OMGosh those I will be trying tomorrow with coffee. Can I tell you that 3 pans of PW's apple dumplins has ruined the thought of dieting until Monday :)

Hey! Just returned from Paris where I ate Pain au chocolate every morning with my cafe creme. Oh boy, today I really did miss those little gems. I reminded myself that my husband used to make a pastry that was pretty similar. He used Pepperidge Farms puff pastry and Ghiradelli bittersweet chocolate bars. Just cut the puff pastry (thawed) in triangles and place the chocolate in the middle and bake until puffy and golden. Of course the crescent rolls would work, but the puff pastry is a little more true to the word "pastry".