The lighthouse at the Head of the Bay

My husband and I took a trip to Turkey Point Light this past weekend to get some shots of the picturesque little lighthouse that's situated there. All week long, I'd been meaning to go after work thinking that maybe I could get a shot at sunset, but something always came up, whether it was weather or time constrictions. And finally, on Sunday, I got to go with my husband and George. 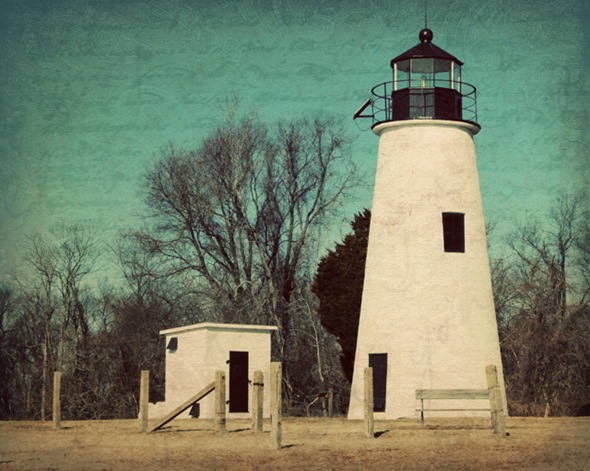 This is Turkey Point Light and it sits atop a 100-foot cliff at the headwaters of the Chesapeake Bay where the Elk and the North East Rivers converge. It also has the distinction of being the home of the last female lighthouse keeper in the country. Fannie Mae Salter served from the year 1925 when she took over the duties upon the death of her husband and continued until her retirement in 1947. Today the light is maintained by Turkey Point Lightstation, Inc. who have plans to reconstruct the keeper's quarters, turning the ground floor into a museum. 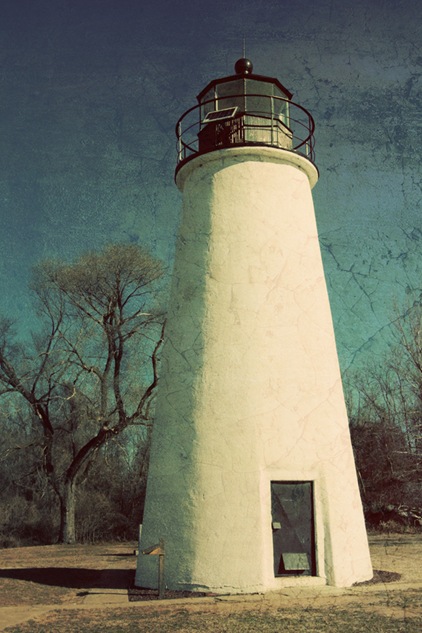 I took a lot of shots this weekend. The sky was a deep blue and the lighthouse was bright white in the sun, but as I went through the photographs of everything I'd shot, I just couldn't help but feel bored. Blah blah blah. Same old lighthouse photos, nothing spectacular, and as my husband would say, "it's just another day".

But then I started using some actions on them and some texture overlays and suddenly, I was liking what I was seeing. Maybe you don't, but really I do. 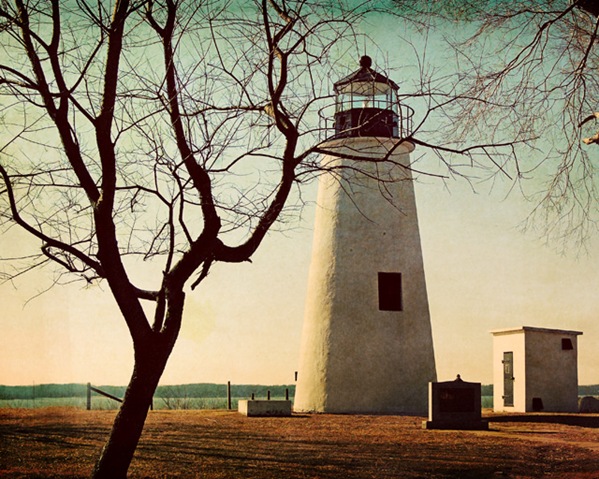 For these shots, I used Pioneer Woman's Seventies action, which I've been into lately for some reason, so please bear with me in yet another stage of my life. I also applied a single different texture to each photo, using two in the last photo.

And then I played with George who is now in his customary position on the floor at my feet. And it is good.

This just in: Pay It Forward contest going on now over at Mindwhispering's Photography. She's giving away a set of her beautiful notecards. You've got to be willing to pay it forward if you win. Contest on until Feb. 25. Stop by and tell her I said hi.

The timing... I was just reading Mark Doty's poem "Long Point Light" when your post popped onto my dashboard:
"...and the light house says:
HERE IS THE WORLD YOU ASKED FOR,
GORGEOUS AND OPPORTUNE,

HERE IS NINE O'CLOCK, HARBOR-WIDE,
AND A GLINTING CODE: PROMISE
AND WARNING,
THE MORNING'S THE SIZE OF HEAVEN.

What will you do with it?"

I love lighthouses and I really like what you did to the photos. It's beautiful.
Living in Maine we have many, and all worth photographing :) I'd love to have the time to do that someday.

I love lighthouses, when I lived in San Francisco, I used to go north just to shoot the light houses...my favorite is the last one..it feels so good to me..

Kate, you should teach a photoshop class. I'm serious.

And yes, I love lighthouses as well, but you have captured the essence of the lighthouse.
I fondly remember the lighthouse off the shore of lake michigan. Ahh...memories

I think these are lovely work and I love PW's 70s action too. I'm all about vintage lately.

You did a great job with those images, Kate. I'm going to have to play with textures again sometime soon.

Yes, definitely, it looks like you hit the perfect time for capturing this lighthouse in photos. Your choices of textures are a lovely addition.

Interesting tidbit, too, about the lady light-keeper.

I love your lighthouse photos. They are gorgeous. Here in the Ozarks, Hannibal, Mo has the lighthouse that holds the distinction of bein' located further inland than any other lighthouse in the world.
I loved your video, George is great. What song was that you had playin'. I really like it and would appreciate knowing who it is done by. Thanks for the great pictures.

Lovely as always Kate. I love the feel the pictures take with the actions you applied.

Nice shots. I would like to see the 'just another day' shots too ...

I don't know a thing about photography, but I do know that these have emotion in them. And anything that evokes emotion is usually okay with me.

I like what you've done with the textures. Now they look like vintage postcards. The second one is my fave.

I love the last one.

It's the view Fannie Mae would have had standing on the ground looking up at where he was working. Maybe she was hanging clothes on the line to dry.

It's the view she would have looked over, the score of years that she served the sailors, after her husband passed.

The seventies action is great on it. Tell Mental P Mama I've been nagging you to do the same thing and that one day, when you're ready, you'll do it.

Those photos are beautifully done!

Ooooo! (I'm saying that about ALL your photos lately) Love the writing in the texture of the first photo! :)

I'll have to try the PW actions again. I have to get used to tweaking them to get the look I want...

What you might think as a beautiful prize, others may think of as boring. Also, not everyone (both sender and receiver) is comfortable giving a stranger their mailing address etc.

What a charming little lighthouse! Love your layering effects.

Thanks so much, all. Mental Mama, thanks for the vote of confidence, but I simply cannot agree. Photoshop is this entire other world. And I only understand a very very tiny portion of it.

Kate, had to come back for another look at the lighthouses! Growing up in the Great Lake State there are hundreds of lighthouses along the shoreline of all the lakes. I love them! In the meantime I caught the photo of your hubby in his favorite shirt and had to see it on Flickr....Great Photo!!!!!

These photos are stunning! Whatever you're doing, it's working!

Wonderful photos of Turkey Point. My hubby and I love the walk to Turkey Point, it does seem like a great spot for the sunset. Thanks for stopping by my blog.