The sun was fleeting today and when it would pop from behind the clouds, it was a beautiful thing to behold. But for the most part, it was a gray day. And I spent my morning cleaning. 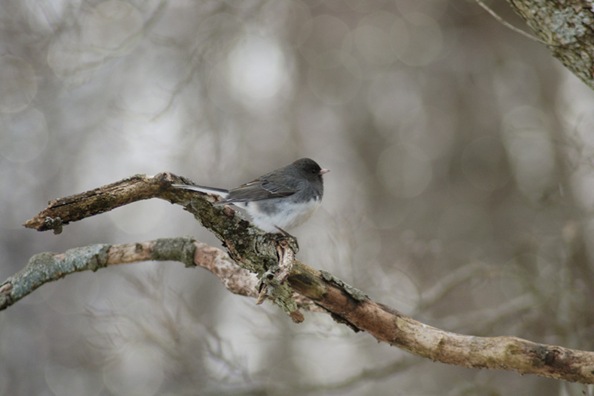 In the afternoon, I looked out the kitchen window and saw two squirrels raiding the feeders. I went to get the camera and my jacket and scarf and with the 70-300mm lens on, I quietly and slowly opened the back door.

All of the birds flew away at the tiniest movement I made, and then the one squirrel jumped down. The other stayed though, and eyeballed me as he continued to eat. I had enough of him, so I moved and off he dashed. And so I waited until the birds began to return. 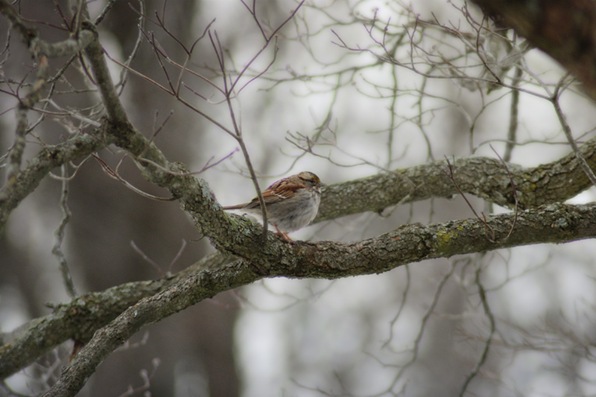 I wasn’t dressed warmly enough and after 5 minutes began to feel the cold seeping in. But I managed to capture three different birds clearly enough, I suppose. 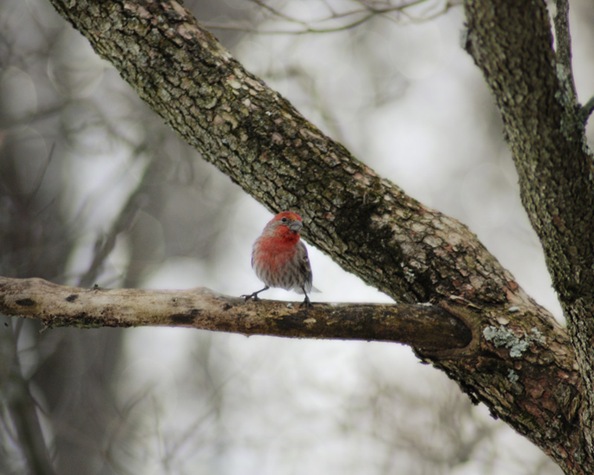 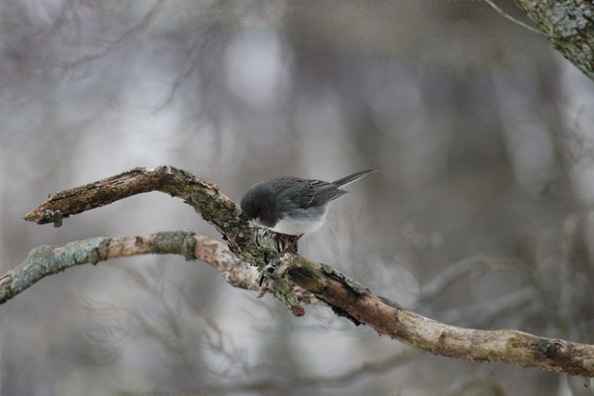 This is the same little juncoe that is in the photo at top.

This week, I hope to accomplish several things. I may have to make a list. But for today, all was quiet and gray and dreamy and as I write this, Canada is playing the US in men’s hockey as the 2010 Olympics comes to a close. Tonight I’m cooking because I wanted to give my husband the night off. Sometimes my kindness astounds me. **grins **

We’re having this macaroni & cheese with stewed tomatoes on the side. And pound cake with ice cream for dessert. What did you have?

Have a beautiful day, all.

Pot roast with rice and gravy, field peas and corn. People in other states probably wouldn't cook rice since potatoes and carrots are cooked in with the roast and gravy but in LA, (that's Louisiana not Los Angeles), rice and gravy are one word ;)

What beautiful photos, I just discovered your blog and I will be back to see some more.

Because I got caught up in a project that took too long and isn't going to work out anyway....grrr (my husband's fault!)
I made an omlette with mushrooms and ham, and fries on the side. Really nutritious!! but I'll fix that tomorrow. Watched the hockey game too and am so glad with the outcome.
(Should I duck, as you throw the dog toys at me???)
Have a good week....

Hey wasn't that a great game! We've watched so much of the Olympics my eyes are square (we don't have a flat screen tv). I made my first mosaic due to you Kate. It was challenging to figure out how to do it but it felt like such an accomplishment in the end.
Thanks.

I'm sorry but the mere thought of homemade macaroni and cheese and stewed tomatoes has me speechless.

wv: biree. Not even biree is as good as the melted cheese on homemade macaroni and cheese. And don't get me started on stewed tomatoes.

Beautiful photos. I love that first of the Junco.

Macaroni and cheese is one of my favorite comfort foods.....I go a step further, and just squirt regular mustard right in it.
It is SO good.

We are having left over home made (kind of) rigatoni and natural beef tri tip all from last night's dinner with friends! The Wife of a Dairyman

My wife and I are both followers of your site. We live just south of Jim Thorpe, which we see is a favorite place of yours.

We had spaghetti and meat sauce for a wayward son who didn't get home until 4 this morning. gah. And you do know that a junco brings more snow...right?

Just beautiful birds.
Oh, and hamburger and a salad.

I know what you mean about having to stay warm enough to wait for a good shot....but they are worth it! These are fabulous. I love the middle one!

We had a pot of beans and homemade cornbread. A simple and filling meal.

Pretty birds. We were visited by several pair of Cardinals in the snow.

Dinner tonight - last night's leftovers from dinner out. Chicken marsala for the hub and fettucini alfredo with shrimp and broccoli for me.

my mom made mac & cheese this way ,
mac, cheese, bacon!. tomatoes,
start again and again, oh my, topped with lots of cheese. good. crave it.
bv

This probably sounds terrible, but it was wonderful. I had just a little bit of leftover chicken noodle soup -- mainly broth and just a few noodles. I cooked some spinach three-cheese tortellini and six medium-sized shrimp and mixed it all together!

The bird pics are just too sweet.

As Marilyn said, I was pleased with the outcome of the hockey game. The Canadians deserve it! They are wonderful neighbors (remember, I live in Arizona!). So go ahead, throw the dog toys at me and Marilyn. We don't care!

Love the photos! I made spanish rice, rolls, and then forgot to put out the fresh carrots!

In my corner of Texas, the birds in my yard are mainly sparrows and crows. Periodically, I'll see cardinals and blue birds. Lovely birdy pictures. For dinner tonight, we had our traditional Sunday night fare: bean burritos. Been having that for over 30 years every Sunday night.

Beautiful birds! We had leftovers, but it was great! Pork chops with curry-apple-onion sauce over brown rice. Hubby had peas, I had green leafies. No dessert. He can't have sugar and I've given up sugar for Lent (and hopefully longer). Mac 'n' Cheese is fab, especially when it's homemade!

I love whatever it is you did to the background in those bird photos, it really makes the subject stand out. I had a boring broiled chicken breast with some marinara sauce and some spaghetti on the side....yours sounds way better!

Love seeing your feathered visitors. :c) I have to admit, as much as I wanted to pull for the US, I was hoping that Canada could wrap up their Olympic games with a gold in hockey. Good for them.

My Aunt cooked last night.. well a couple of us brought things like I brought the lima beans with corn and dumplin's, but we had homemade mac and cheese, stewed tomatoes, fried chicken that was fried right there that day, real mashed potatoes, deer meat and gravy, homemade cup cakes, cannied yams without the marshmallows we don't like the marshmallows, and homemade rolls. Have I mentioned that I think my Aunt could be the leading cause of my huge rear end??? Or maybe it is the fact that I can't stop eating when she cooks LOL

I have a four cheese macaroni recipe that my family loves.. very fattening though, so I try not to make it more than once a month. Nothing like a good mac N cheese on blustery winter evening.

Last night's dinner was at a local pub :-) I had Avocado fingers which were divine if you're an avocado eater, lightly battered and deep fried, but still fresh on the inside with a ranch dip. And a Cob salad.

Lovely bird photos. I was also outside and under dressed yesterday for a bit trying to capture a bird photo ~ you were luckier than I was....or I got chilly quicker than you. :)

Okay. Now I'm going to have to make mac and cheese tonight. It's your fault.

For brunch I had grilled chicken breast w/fontina cheese, olive tapenade and a slice of bacon on a lovely crusty piece of sliced french or italian bread (I forget) at Recipe w/my pal Wendy ... oh and a side of their amazing homemade potato chips ... I didnt have dinner ... oh and I picked off the bacon cause I dont eat meat .. but made an exception for the chicken because I needed protein and well ... sometimes I actually eat chicken when fish isnt an option ...

We had chili with rice and cheese, a salad and birthday cake for my brother's 60th! Nice family dinner. Was sad about the hockey game but our local players rocked both teams. We are big NJ Devils fans!

clearly enough you suppose!!!!!!!! OMG KATE!!! you seriously dont know how awesome your birdy pics are... I would give my right arm... ok middle finer cause its all banged up anyway... and i really need my arm .. but you know what i mean... to get pics like those... GIRL PLEASE! LOL I LOVE YOU! and your clear enough i suppose pics :D

oh for supper we had pork loin fried, mashed taters with pork gravy, and the best lima beans i have made in years... or maybe we were just craving them and that made them taste better...and peanutbutter cookies i made in the afternoon with nilla ice cream... :) ok i had a cookie but no ice cream and mike had nothing for desert because his belly is still sore from being sick all weekend... and so we have the stuff here for that but did not have it :D

From the Old InkWell said...

Love your bird photos! So dreamy.

Hi Kate, what wonderful birds, they sure made me smile. There is something about tiny birds that gets me everytime and yours are always terrific. Tonite I am thinking about breakfast for dinner, maybe grits and eggs. It is always fun to have breakfast at night. Jeanne

beautiful shots - i saw a little red finch yesterday while i was sitting outside.

superior bokeh!
lovely birds...
and we are having leftovers...smiles

your grey day really does seem quite perfect...and look at all that bokeh...wow !

Lovely photos...what creates that soft background? Is that referred to as boken?
We had pizza from Pizza Hut. Surprisingly good.

Junco's are one reason I like winter. they are such pretty little birds. your picture is beautiful

Love these photos! I have the same problem when I go out to photography birds. They always fly away so fast!

Hey! Don't knock jeopardy! It's Wheel of Fortune that reminds me of my mom. ;) And my 12 year old is all about Jeopardy and Alex Trebeck right now. He watches the old shows on YouTube.

I love your photos. I always feel weird about converting flowers to black & white or sepia. I think their color should show.

And "killing" house plants is healthier for your waisteline than eating like I do under stress. ;)