The warmth of the sun

This morning I got up and had my coffee in my new favorite cup. The sun was shining and my husband had already been at his chores for over an hour. 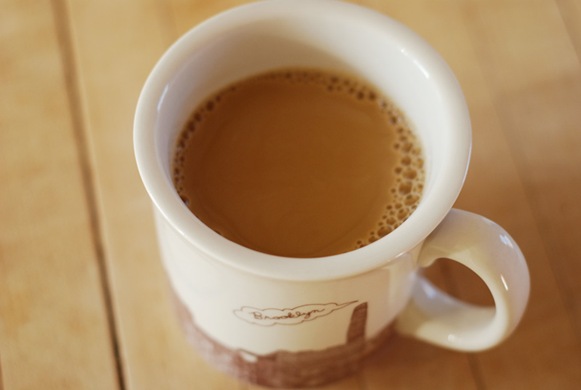 After coffee, I took George on a nice long walk. He left me after a bit and I assumed he’d run over to see where his dad was and what he was up to. 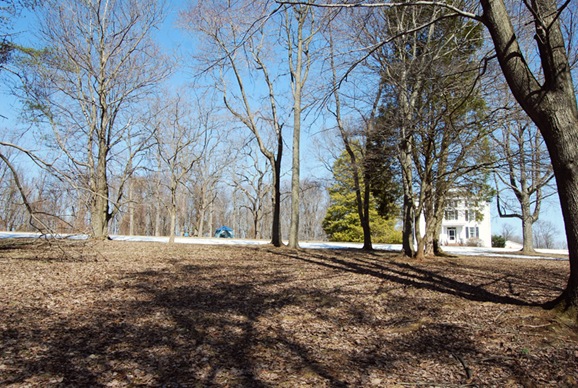 As I passed the front of the house, I noticed that my husband was putting up one of the tents. I love when he puts up the tent. 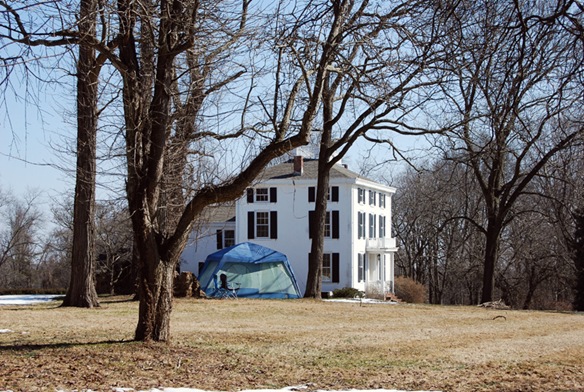 This is the warm side of the house and today (and yesterday), the sun felt like a blessing that we badly needed. Can you see the snow that’s still on the ground? 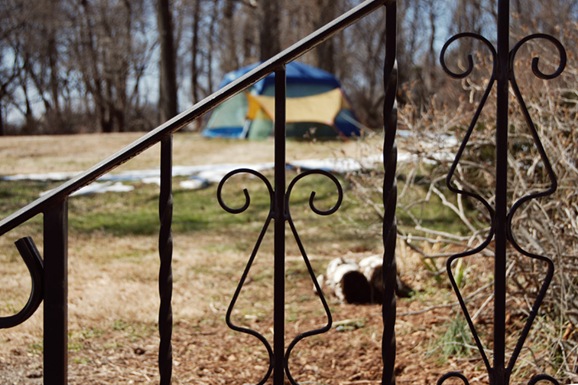 He also set up the little heptawing to air out, he said. The heptawing is just a little shade cover you can sit under. We don’t use it much. 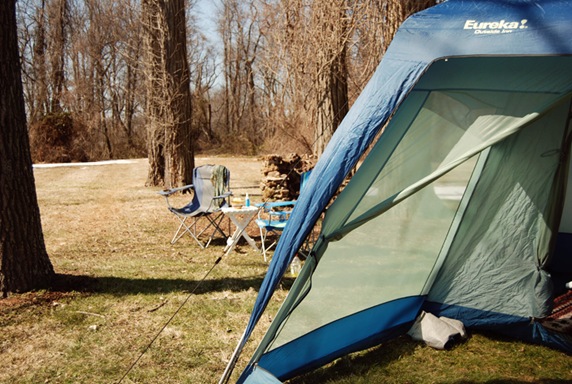 When I got done the walk, I saw that he set up chairs, a table, and put the foam core on the floor of the tent in case we wanted to take a nap later on. 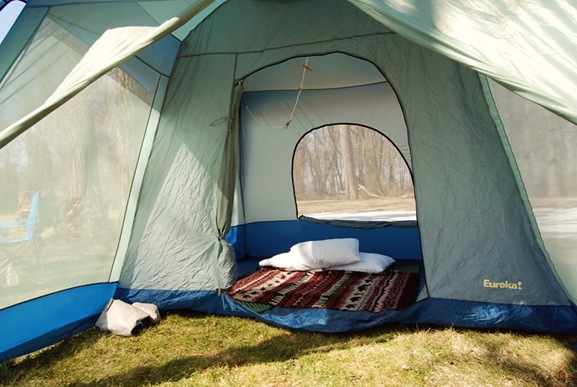 A nap in the middle of the day is delicious. 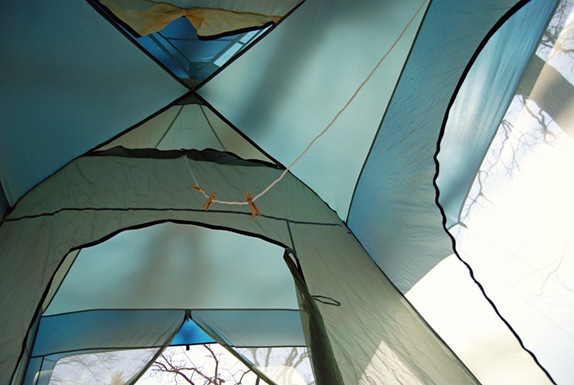 But we never did take that nap. Instead we laid in the tent for a little while and remembered when we bought it and some of the times we used it with the boys when they were young. We usually take the backpacking tent when we camp and it’s just the two of us. That tent is infinitely more weatherproof than this one. But this one is fun and I like that you can walk into it and you don’t have to crawl. 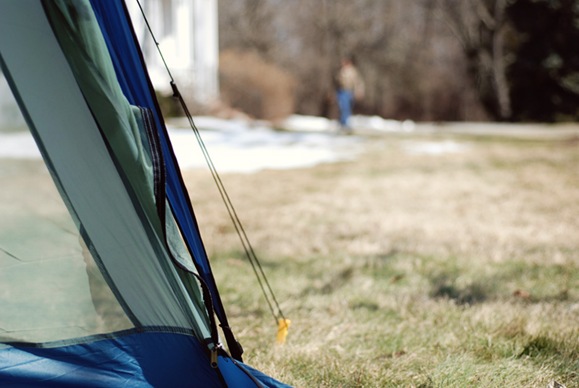 We had lunch outside today and we talked about a lot of things but mostly we talked about going camping. We read magazines and did puzzles and just simply enjoyed our afternoon in the spring-like temperatures. 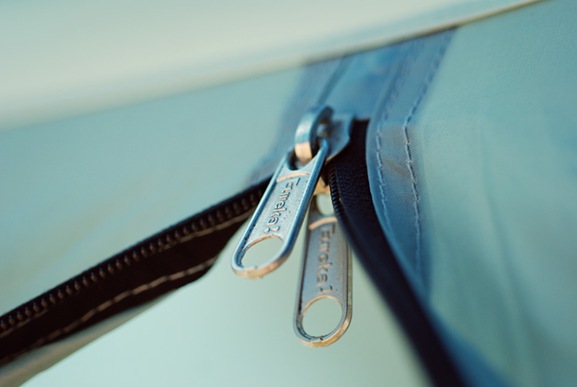 Today was a gift. And when the week ahead gets rough, all I have to do is close my eyes and remember this day.

Kate, what a wonderful post and day for you. Thank you for sharing this with us...your photos are excellently placed within the moments of your words...as always ♥

Oh that sounds like the perfect Sunday! I can't wait for our temps to get a little warmer so we can set up our tent and spend the afternoon at the lake!

What a neat idea! Our yard is not as large as yours but I think our grandchildren would enjoy arriving to find the tent set up and supper outside!

You are so lucky to have someone to talk to and do things with. I would love to crawl into your tent and take a nap or read a book.
♥♥ Love Hugs and Good Thoughts ♥♥

You've inspired me to do this myself! ♥ Wanda

A well deserved gift since you have been buried in snow for so long.

Spring is closer...can you smell it?

Oh yes, days like this are definitely a gift! :)

those days are a gift indeed

What a splendid way to spend the afternoon. It really was a beautiful day, all the way around.

Simple, beautiful treasures. So nice to be able to appreciate and share them. Thanks for that. :)

I enjoyed this lovely day almost as much as you did :)

Aloha from Hawaii my Friend

Just lovely! It's days like today that fill our hearts... Thanks for sharing yours with us.

So glad you had a wonderful day with your hubby Kate..that sounded like such fun!

What a sublime day. Delicious. I love the idea of the tent. Makes me want to run out and buy one and set it up by our pond.

You both (all three) found something truly special in this day...perhaps bringing your own, new definition to those moments of discovery when people shout, "EUREKA!!"

What a wonderful way to spend the day! My father used to take us hiking and camping on the Appalachian Trail each year, I have wonderful memories of those trips!

Great post....what a precious day! I love tents, so many fun childhood memories camping in them!

To take a nap outdoors in a tent one day....that just sounds divine.

That sounds just like something my husband would do! Fun! Where did all that snow go?! I am amazed that it's melted so fast!!! Come say hi :D

There is somethin' so cozy about a little lazin' around in the afternoon sun. I absolutely love the close up zipper....just a perfectly graphic and frameable shot to remember the moment.

How sweet... what a lovely thing to take the time to do. Inspiring us all to do the same... savour the moment!
:-)
BB

What a great hubby you have! And, what a delicious way to spend the day. :c)

A lovely day for you both; the sun is so very welcome when it is able to shine. It really is time these clouds shifted now!

I don't know why, but this brought tears to my eyes. Have you ever read Five Love Languages? It sounds like your husband's language is acts of service. :)

You two are a gem. We had a beautiful day also, and it looks like more of the same today.

Looks like such a great day and a special time together.

Man. can I have your day? Sounds heavenly to me.You are so blessed, and even cooler, you appreciate it. :)

What a wonderful day. All the kids flocked outside yesterday like they had never seen a temperate day in their life. Skateboards, bikes, and rollerblades made an appearance after a long winter's nap.

I hope Mother Nature is not just playing with us ;0)

What a nice way to while away the sunshine-y day ...

I'm in love with this photo montage of your day...these photos are as beautiful as your day sounds...love that the mr puts the tent up in the yard...

Delicious, indeed. From start to finish;)

and did you smother him in kisses for being so incredibly sweet ?

What a delightful way to spend the day!

Your photos, as always, are simply amazing. You have such talent.

Kate...You should set up another nap tent and charge $10 per hour. I think people would definitely pay you too. My dog has been napping in the sun on the deck all morning. Today is definitely another gift. Enjoy.
Rosemary

Kate that sounds wonderful! I think when the snow finally melts enough we may have to set up our tent to. It actually could probably stand to be aired out. lol.

By the way, we had a great time out on the river!

I really enjoyed your day. I also had a nice Sunday. The grandkids were all here. We spent a wonderful spring day outside. Love your photo of the zipper.
T

Camping & tents will always remind me of being a girlscout. My family?!...NOT campers so girlscout camping trips were my only experiences & wonderful they were!

I think it is incredibly sweet that you two laid inside your tent & reminisced...it's like something you read in a book or a scene from a movie...sigh.

A delicious little spot for a nap! (I can see why that's your new favorite mug.)

Too bad you didn't get that nap. Great pictures.

I am so jealous...I would love to be able to just spend a day like that..
Makes me want to dig out the tents, but I'm not up for napping on the cold wet ground here. Maybe later in the season.

I will be thinking of you in the week ahead. If that will help....
Ms Soup

I can't believe your husband did this without any prompting!! How lovely!

What a nice afternoon Kate. Can you believe this wonderful weather we're having? I just love it! Today Lily and I went to the beach and though I thought it would be cold, it wasn't. She's pooped out tonight, just the way a dog should be.

I hope George enjoyed a little nap in the tent!

Very nice post today...So..did you really nap in the tent?

I felt myself starting to relax just reading this post! :-) Thank you! Beautiful photos and captions ... sounds like a wonderful day. Congrats on your Post of the Week!

What a sweet post. Lovely pics. Now that snow isn't much to be complaining about, it would seem to me living i Sweden... ;) You have a beautiful house! And a lovely tent... ;) I loved your photos. That last one, the one of the zipper, is a pice of Art!
Congrats on the POTW from Hilary!
Love/ Jo.

Simple pleasures discussed so beautifully. Wonderful photos too! May your week be blessed! Just as you have blessed me with your blog. Congrats on your POTW award,
Hugs
SueAnn

What a great idea! And perfect pictures and words to help us see it! Congratulations on POTW!

Every day is a gift, but some more so than others. As I read your post, a chickadee began to sing outside my window. I think I need to get off this computer soon and head out.

I've never set up my tent in the yard. Maybe I should try that. Thanks for the idea. Great post and congratulations on the potw mention.

Congrats on POTW mention from Hilary

Very pretty, and soothing. I have to mention something because it was making me laugh. The picture through the gate, where you can see the tent off in the background, there are what appear to be a couple of logs facing towards the shot, in the foreground.

For a second, I thought, "Is someone asleep on the lawn??" It was just a fun, added extra for me, that for a moment, I thought someone had just availed himself of the opportunity to lie down on the lawn, as one does ;-)

Congratulations on the post of the week mention over at Hilary's, this was a fun series of shots!

Amazing shots to go with an uplifting story! A gift indeed.

Wow. Welcome to all the new faces here. I wondered why all the e-mail was coming in.
I love a good day in the yard with the tent and the sunshine. Glad it cheered others, as well.

This sounds as though you had a lovely day. You took me there. Congratulations on your POTW mention.