First of all, I want to thank you so much for your kind comments regarding my husband’s photography from yesterday’s post. He doesn’t like me making a fuss over it, or even mentioning when he is the photographer but I have told him before that I will not take credit for another person’s work. I did tell him at the dinner table tonight what some of you said.

He quickly changed the subject.

He’s always been a bit of a hermit, my husband has. And this post is about something he discovered in the yard several weeks ago.

I took these photos on March 6, when we still had snow on the ground but the weather was the warmest we’d experienced since last fall. And as much as I love winter, I was incredibly happy that weekend because of the warmth of the sun. These photos were taken the day before my husband set up the tent in the yard, the post that earned me a finalist award in The Smitten Image’s Post of the Week. 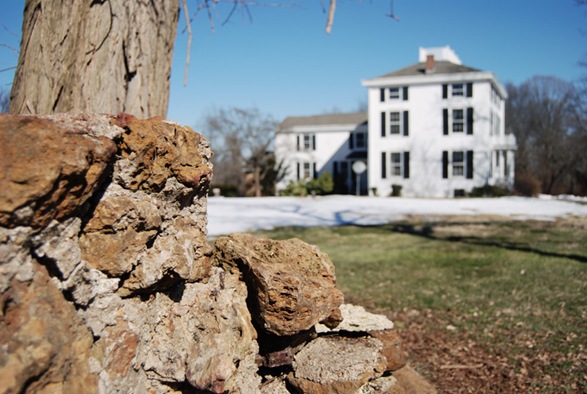 There is a small stand of black locust trees in the middle of the yard and the vines growing up and around them were terrible. Ever since we moved here in October 2008, we could see that there was what looked like a pile of rubble deep in the recesses of the vines. 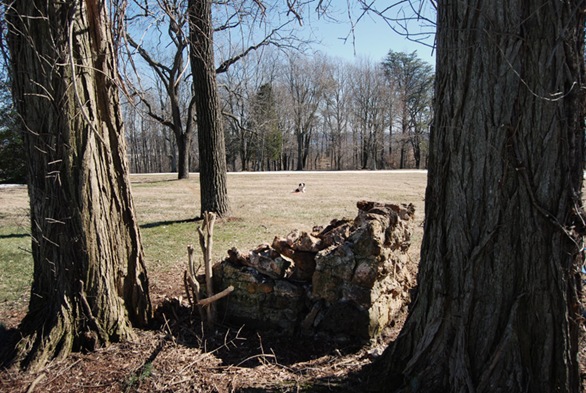 My husband had slowly been hacking away at these vines that week and I hadn’t even noticed. So imagine my surprise when the weather turned warm that Saturday and I found a barbecue grill in the yard.

What my husband had uncovered was a very old outdoor fireplace. 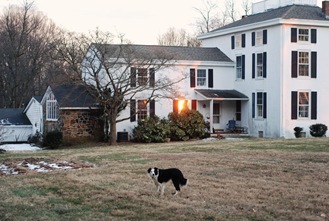 I can’t even begin to guess when this fireplace had been built, but the stone and the mortar look just like the stone and mortar on the breakfast nook, seen in the photo to the left.

The breakfast nook used to house the well but was turned into a room addition at some point. The original house is right next to it and dates to 1769. Next to that is the 1810 addition with the widow’s walk on the roof.

It’s not that we’re going to use the newly-uncovered fireplace. But it’s nice to have it out in the open. 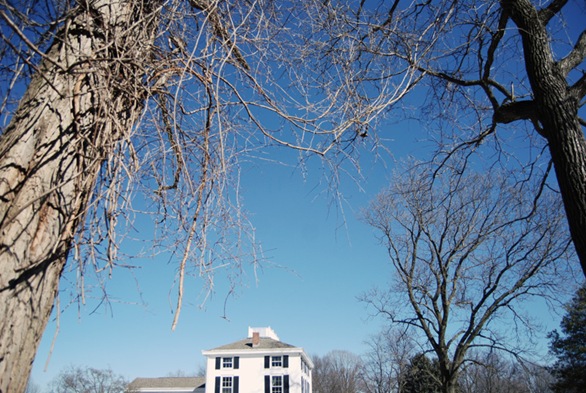 My husband cut the vines as high as he could and at least that may stop them from continuing to grow and killing the trees. And because I made such a big deal out of the whole thing, it probably contributed to him setting up the tent on the following day.

And I will always remember that day. It was a treasure.

I’m looking forward to LOST tonight and it promises to answer some questions on Richard, who is quite the Mystery Man. The Man Who Never Ages. Any LOST fans out there? 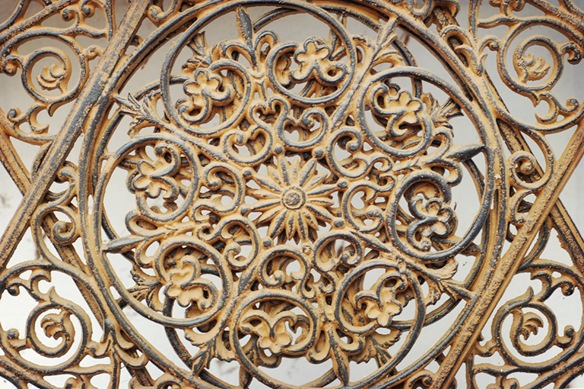 I’m just throwing this photo in because I think it’s cool-looking.

And on that note, I’ll say farewell for now. Until tomorrow . . .

It is a treasure. I wish I could touch something that old and hear the history.

Maybe if I could find a treasure like that, I would clip some vines around here.

Wow.. that's a very cool discovery. A treasure indeed. Thanks so much for the linkage, my friend. You too are a treasure. :)

what an amazing discovery!

when we moved onto the
property that my husband's
grandfather built, we found
a brick wall with GIANT
rhododendrun planted in
HUGE planters. it had been
completely covered by vines,
too.

such a treasure to see each
spring now.

What a wonderful discovery, I wonder if it was part of an old smokehouse? We have lots of those aggravating vines too, and we chop away at them every chance we get, but no cool discoveries...yet!

My son watches Lost and loves it.

I love a mystery. I wonder if it was an outdoor kitchen? As there would have been help, and you know they didn't like the kitchen next to the house, because of fire and the heat. Or from another structure? I enjoy Lost and look forward to tonight! Take care Kate.

We have vines like that all around too. It is a nightmare. Do you ever see ghosts there in that old house? ;))

Oooh...how much fun to have treasures hidden all around you! Nothing much to find in a development 20-ish yrs old (a coke can, a few nails maybe).

Can't wait for LOST! One more episode closer to ending...bummer.

That is soooo cool. It's great that you live in such a rich historical area....and find treasures too.

When my sister lived in Cumberland, she use to talk all about the rich history.

great treasures. i tried to be about lost but, i just couldn't hang.

have a beautiful night.

Well, what you are calling an outdoor fireplace could ahve very well been the kitchen at one point. The kitchens used to be in separate buildings. how old is your home. Sorry if that is personal.

What a beautiful place to live...gorgeous surroundings, wide open spaces, history to discover...it's so nice to see such an antique gem cared for rather than torn down and something "shiny" and newfangled built in its place. Your pictures are gorgeous!

Nope, not a Lost fan - but that doesn't mean I'm a purist that doesn't watch TV! HA! Many many shows draw me in, much to my chagrin..

wv: peedsoa I first peedsoa I could watch the movie in its entirety.

Awesome discovery...I love things like that...Imagine that being out there all that time, like buried treasure...
hugs,
glenda

Interesting post, Kate. But I think your husband is the real treasure! So glad he is enjoying taking photographs!
You are also a marvel, especially when you are launching into all that cleaning! Amazing, Kate. Wish you could come and visit here!

I love places with history which really makes me loves this post! When my husband and I moved to upstate NY, we decided to move into an apartment on an old military post whose buildings have been turned into town homes and apartments. It might not be in perfect condition but it makes my heart happy to live in a place with such history as the invention of chloroform and a place where Ulysses S. Grant was stationed at one time! :)

And we are also big Lost fans in this house. But, we were watching a movie last night, so we are going to have to watch Lost tonight. I'm really hoping they actually answer some questions!

Your place is a photographer's dream! Kudos on the Smitten Image award!

That is so cool! That looks like such a wonderful house -- living history.

Some of those vines depending on what they are have to have their roots dug up. But, a good ol dose of ground clear will do most of them in.

That is the piece of property that keeps on giving!

Hi Kate! Just went back and read your post about the tent. What a delicious post and a lovely day you had outdoors! Love the picture of the zipper on the tent.

As usuual...beauty and peace all in one setting.

Great find on your husbands part!

There certainly are hidden treasures to be found! Just recently I found a wonderful old shed in the neighbors yard covered in vines and red berries. No one has bothered with it for years. It made for an excellent photo project though, but I haven't posted them quite yet.

I'm a LOST fan and last night was good!! some questions answered but leading to more questions!

Very nice discovery! I have always loved your home and wondered the years it dates back to. Love to hear more about the history.

I truly enjoyed his photos from yest...he has a great "eye." Thanks for sharing!