I’ve made mention before that one of my long-time favorite shows on TV is Rescue Me, a series that airs on the FX Channel. It focuses on the private and personal lives of a group of firefighters in post 9/11 New York City. It’s gritty, intense, raunchy and at times, incredibly funny, and I’ve been missing it a lot lately. Season 7 doesn’t begin until early summer.

I feel like I’ve gotten to know all the main characters since the show first aired in the summer of 2004 and Daniel Sunjata, who portrays Franco Rivero, is one of my favorite characters. 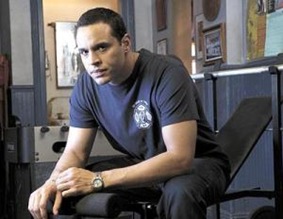 And until this evening, I had no idea I was HIS favorite as well. I mean, it says so right here. 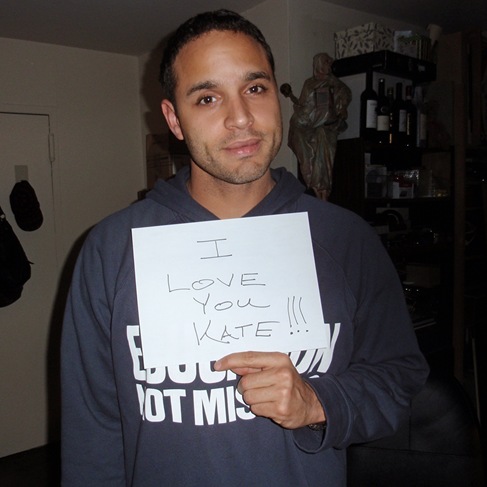 Taken in the NYC apartment of a friend of mine, he looks really kind ~ not at all like the tough firefighter he portrays on the show. And he was more than happy to oblige my friend when she told him I was one of the biggest fans of the show.

Here’s the intro. I look forward to hearing it again this summer. And thanks to my friend for making me smile today.

What a thoughtful friend, that Daryl.

Do you think she can get Harry Connick, Jr., to do one for me?

Ah well, anyway, that is awesome.

well you are a lucky girl...

I love the new header ..

Tell your friend I want George Clooney or Hugh Jackman or Robert Downey Jr.!!! I'll take any of those.

How cool! What a great friend to do that for you.

How awesome is that? He is hot!

Awsome. I had written a post on my blog about how I love certain tv characters. I linked your post back to show that they love bloggers - or at least you - back. Way to go.

Kate - that is awesome! I've been a fan of Denis Leary's since his days on Afterdrive AGES ago and was so happy when Rescue Me got critical acclaim...it's a great show; one of my favorites!

So cute...that is one of my favorite shows of all time, just after Six Feet Under and just before Big Love...can't wait for the new season!

...Now you have celebrities telling you they love you?! *sigh*thud!* ;o)

...Congrat's on that and whatta cutie he is! And Daryl did that? What a sweetheart! And CBW? Take a number 'cause HCJ is mine honey! *giggle* :o)

This is why we love Daryl. That was such a thoughtful gesture.. and sweet of DS to oblige. :)

He's such a hunk. Glad he loves you.

How awesome is THAT??

How cool is that!! I mean HOT!

Did your tummy tingle? LOL

Wow! He is cute, cute, cute. I've never heard of this show. I don't have cable.

I told her to do that for me when George Clooney comes over;)

I had to reread because I thought he was a firefighter but then he plays the character - so is he an actor or firefighter? Either way, cute! Our local firefighters are strong, handsome young men. I haven't seen an old one in years :)

By the way, the new masthead is beautiful. Out with winter snow, in with spring birds!

That is so cool!!

Does your friend happen to know Morgan Freeman?

Awww Daryl rocks...and so does Daniel for doing that! That's awesome!

Lucky you! Is that the show with Dennis Leary?...a show I always thought looked good but have't managed to see...
xo

Wow!
My daughter went back to school with all my Rescue Me DVDs...it was hard for me to let her take them, I would have gladly given her my wedding ring instead!
What a great picture!!

So beautiful. We Marylanders ROCK!!