While watching Today on NBC early this morning, I was treated to an interview of wildlife photographer Greg du Toit who has accomplished something amazing. After a year of unsuccessful attempts at trying to get the photo he wanted, he decided to climb into the water for the perfect vantage point.

His stunning photos will be featured in the March issue of the BBC Wildlife Magazine but they came at great cost to the determined photographer who contracted malaria, bilharzia and a host of parasitic worms that soaked through his skin while he was submerged. 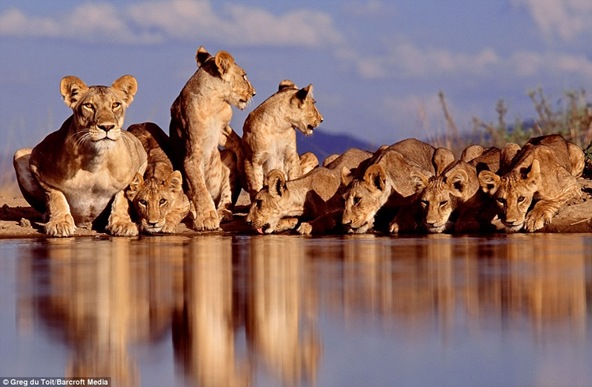 Please visit this link to read more of his amazing story. 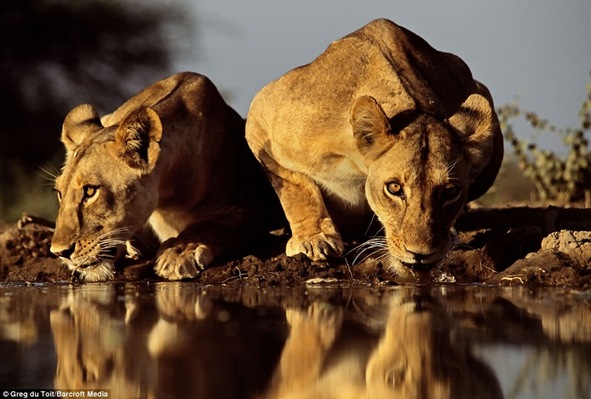 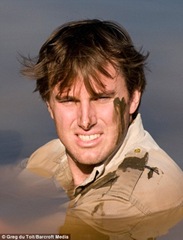 The animals were aware that something was in the water but apparently they only recognize humans as upright on two legs so they took little notice of him.

The photo here shows him partially submerged as he holds his camera. He did this for 3 hours daily, 7 days a week for 3 entire months at a total of 270 hours. After building hides and digging trenches near the animals’ drinking spot, the determined Mr. du Toit decided that the better vantage point would be to climb into the pool. (My kinda guy).

His wife admitted that he wouldn’t listen to her as she feared for his life, wondering what she would tell his mother if he was killed. The photographer said that it was one hundred percent worth it and he’d do it all over again, worms and all.

He also captured zebras, warthogs, baboons and a variety of African birdlife. More of his wildlife photos can be found here where he wrote a guest post for Photo-Africa.

And that’s my news for today. I found it pretty exciting. Oh, and one last thing. His brand of camera: Nikon. All photos courtesy Greg du Toit, my new hero.

Wow.. I'd sure never do it, so I'm glad he did. Hopefully, he's recovering well. Beautiful, aren't they?

WOW - quite dedicated! What an amazing story ~ thanks for sharing it!!

crazy but adorable guy... awesome pics too of course... must go see more.. :)

Now that's dedication I tell ya! Thanks for the link and story.

Thank you for sharing this story. Simply amazing!

Wow!
The truly awesome artists do go that extra mile.
I would say the worms were worth it!

Yes, he's a bit crazy, but he got the shot and in the end that's all any hot-shot photographer really wants. That and bragging rights ; )

Wow. Anyone who would willingly take on parasitic worms for a photo is insanely, passionately dedicated. Great story.

I saw that on TV this morning. Wasn't that something?! I love photography, but I have my limits. Worms happen to be one of them!

yeah, i admire him too but no...i couldn't do it. that is part of what makes him amazing. but i wonder why he didn't wear a wet suit.

Now that is dedication that was well rewarded. And, Yay! for Nikon! (And you for your selection to be on Pioneer Woman's reading list.)

These type of photographers set the bar high for all others, despite the dangers he risked. I am so glad he's alive to tell and show his story. If he had a blog, now that would be amazing wouldn't it? Thanks for sharing this wonderful story.

...Wow. Just wow. Stunning is the word. Thanks for sharing that Kate! :o)

...His spirit reminds me of you and how you'll lay down on the cold, damp, dirty ground, fighting off pesky insects, straining to get that perfect shot! Oh, what you go thru for us... I tip my hat to this fella and you too! Job well done I say! :o)

What an absolutely gorgeous photograph. That's what I call a dedicated photographer. I hope he's recovering.

My family doctor went on a photography safari of Africa, and his office was lined with wonderful photos he had taken.

There used to be a live camera where you could log on and watch animals at a watering hole in Africa, and the munchkins and I would sit and watch it, mesmerized.

Amazing photographs. Amazing! Can't wait to see more photos. What a gift he has given the rest of us through his work.

So nice there are people crazy enough in this world to do this sort of thing for the enjoyment of the rest of us.

Thanks for the link to Greg's guest post on Photo-Africa. He is truly a fantastic wildlife photographer with a true passion. Great images!!

I love someone who breaks the rules/thinks outside the box and voila!...something fabulous!

They are stunning...he is an awesome man! :D

His photos are amazing and well worth the risks. Not sure I could do it, but I'll gladly enjoy the wonderful fruits of his labors! Truly breathtaking!

Oh My God. See, as an ex-news person, this totally impresses. Serious dedication with serious results. As a lazy wench however, I am astonished and somewhat shocked. Worms in the skin are WORTH it?? Gah!
:-)
BB

Well that story (and links) pretty much made my day, CG, maybe even my whole weekend!

YAY Nikon! geesh, they should definitely sponsor THAT young man...

A man with Patience.

Now there's someone doing what he was born to do. Amazing. Excellent example of thinking outside the box. Thanks for sharing that.

Thanks for introducing this amazing photographer to me Kate...Amazing with a capital A...

Good heavens, that's showing tremendous commitment to the cause!

YIKES! But the results are amazing, and thank you for sharing them.