Recently I was contacted by a representative at TLC Book Tours to write a review on a book of my choice. I chose Tom Franklin’s Crooked Letter, Crooked Letter because I found the description intriguing and I love a good who-done-it. 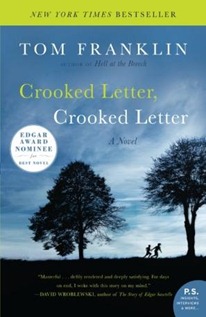 In the 1970’s, Larry Ott and Silas “32” Jones were boyhood pals in a small town in rural Mississippi. Their worlds were as different as night and day: Larry was the child of lower-middle-class white parents, and Silas, the son of a poor, black single mother. But then Larry took a girl to a drive-in movie and she was never seen or heard from again. He never confessed . . . and was never charged.


More than twenty years have passed. Larry lives a solitary, shunned existence, never able to rise above the whispers of suspicion. Silas has become the town constable. And now another girl has disappeared, forcing two men who once called each other “friend” to confront a past they’ve buried for decades.


In this Edgar Award nominated book, Franklin deftly weaves back and forth from the present to the past, allowing the reader to understand how the two main characters in the book become they men they are today.

The Larry of today lives a desolate and friendless existence, still in his parent’s house – his alcoholic father having passed away and his mother in a local nursing home. I wondered why he even stayed around, but this is his land and his history in this little town in the steamy rural south, and besides, his mother still needs him. If not for his life-long love of books, Larry would have nothing.

The Silas of today is respected by the citizens that he serves, he seems to have good friends, a decent life, and the brains to have become constable. But there’s something lacking in Silas – empathy perhaps. Empathy for his old friend, Larry.

Then another girl goes missing, the daughter of a powerful family. Larry becomes a ‘person of interest’, and then is shot. Silas is assigned to the case.

This story is about a lot of things – racial conflict in the South, boyhood friendships, childhood dreams, and secrets, to name a few. But what I loved about this beautifully written novel was the final redemption. The ending wasn’t all too surprising, but the story - like the kudzu vines in its sleepy southern town - wrapped around me and wouldn’t let go. And at the core was friendship and redemption. I highly recommend this book.

Tom Franklin is the author of Hell at the Breech and Poachers. He lives in Oxford, Mississippi, with his wife, the poet Beth Ann Fennelly, and their three children. He teaches at the University of Mississippi.


This book has been read and reviewed as part of a TLC Book Tour. You can check out the other stops of the tour [here].

My comment was eaten, so if this is a repeat, my apologies...but

What an honor and how exciting to be asked to write this review, and what a great review it is. I will definitely put this on my summer vacation book list.

I almost never read anything besides magazines, but your review was so beautifully written that I think I might have to pick it up and give it a go!

I love reading book reviews...though most of us come here looking for the beauty you capture, this was still enjoyable to read..though not as much as the book, I'm sure.

wow you did a great job...made me want to read it for sure...you are a woman of many talents...

Hey that was a really professional sounding review, and more importantly, it really piqued my interest in this book. And what's more, I almost never read books! xo ~Lili

It sounds like a great read. Got to get it. Thanks for the review.

Sounds like a great literary mystery! Since I love literary fiction and my guilty pleasures are mysteries, this sounds right up my alley. I just need to dig it out from the pile of books I have. :)

Thanks for being on this tour!

Sounds like a great literary mystery! Since I love literary fiction and my guilty pleasures are mysteries, this sounds right up my alley. I just need to dig it out from the pile of books I have. :)

Thanks for being on this tour!

I have been reading books a lot less since I started reading blogs...but whenI do read it is often a mystery...this one sounds good! Great review!

Mom on a mission said...

This book sounds amazing! It will be at the top of my "have to read" list :) Tx for the review!

Sounds like a good read .. you wrote an excellent review

I was wondering when I saw the title if they got it from Mississippi.

And to Kathy...I am orignally from Louisiana but lived 12 years in Mississippi. I never heard of the crooky letter chant. Love it!!!

Kate, hope you and DH find the perfect place in Maine to spend your vaca!