You all know how much I love movies, and I know that I’ve posted about this one before, but I just watched it again last night and felt like sharing.

The Love Letter (1999) is a delicious little gem of a film. A romantic comedy directed by Peter Chan, it’s set during the summertime in a sleepy little fishing village in New England. The film centers on Helen (Kate Capshaw) who owns an old book store in Loblolly by the Sea. In a town this small, everyone seems to know everybody else’s business but it’s all in fun. While going through a pile of mail one morning, Helen finds a love letter in the cushions of the old sofa in the shop. 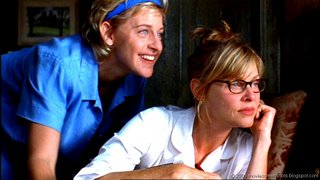 The letter itself is one of the most beautiful professions of intimacy she’s ever read and she can’t imagine who would have left it there for her. Ardent and sensual in its simple prose, Helen can’t get the words out of her mind. Eventually, the letter begins to make its way through some of the other characters in the film who upon finding it, believe it was left just for them. Some friction in particular comes between Helen and her good friend and office manager, Janet (Ellen DeGeneres) after Janet finds the letter.

Ellen DeGeneres is a joy to watch in this film. Her character makes me laugh out loud. 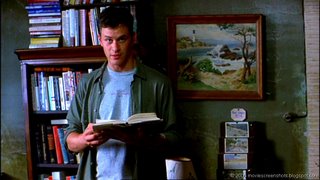 This is a story about love, illusions, and regrets. It’s about falling in love without taking a step, and it’s surprisingly rich with beautiful imagery and a soundtrack that suits it perfectly. The soundtrack alone is worth the price of the DVD rental – from Joe Cocker’s ‘Feelin’ Allright’  to jazz to concertos – the score, mainly by Luis Bacalov, is simply beautiful. 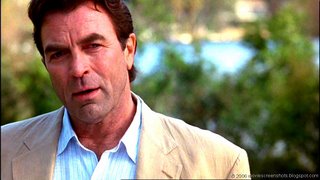 Tom Selleck is perfectly cast as George, the ever capable fireman who’s been in love with Helen since they were schoolmates many years ago. Tom Everett Scott (That Thing You Do) is delightful as Johnny, a young college student who takes a summer job in the book store and ends up falling in love with Helen. Blythe Danner makes a brief but interesting appearance as Helen’s mother and Geraldine McEwan plays the mysterious Miss Scattergoods.

I’ve seen this movie several times in my life and it never fails to make me feel better whenever I watch it. Yes, it’s a chick flick – but there’s nothing wrong with that at all. 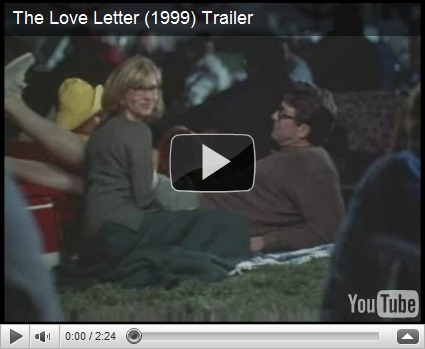 You are absolutely right! This is a great movie and wonderfully done. I have forgotten the sound track though. Sounds like time for a Netflix order.

My feel good movie is Love Actually. I probably watch it once a year.

Have a great weekend, Kate!

I'll be watching that this weekend. Thanks for the heads-up.

Missing Moments, I love that movie too. Everyone, feel free to shout out your faves.

put it on my netflix :) I'm all about a good smile and a good chick flick. One of my obscure "make me smile" films is "Kinky Boots" (check it out!)

I rarely see movies anymore, but you make me want to watch this one. :)

My fave is Princess Bride. Or Babe. Or Search for the Holy Grail.

Oh, I haven't seen that movie in forever! I remember laughing at Ellen's character also! Thanks for a great movie suggestion!

I keep forgetting that Ellen has done movies.

Seems to me that you are a romantic through and through!

Can you believe I've never heard of it? Where have I BEEN?....

Now that I am addicted to NetFlix on my iPad I am going to watch this ... I am making my way through Glee's first season, all the old Sports Night eppies and some fab Brit TV shows like Survivors and Torchwood .. I almost dont have time to work .. bwahaaaaa

Looks interesting Kate thanks for the review...I don´t think I have seen this one before!
Hope you have a super weekend!

SOOOOO on my list to watch now. Sounds divine.

I've never seen this. I love a good chick flick, so I'm putting this on my list.

There must be something in the air today...I'm having a little fun over at my place and you've participated without even knowing it. *grin*

One of my favourites: Some Girls. Not your typical chick flick, love story. Always makes me cry at the end.

O my word, I have to watch this. I'm going to try to find it tonight. Thanks for the teaser,Kate. Have a good holiday weekend!

Window On The Prairie said...

I've heard of this one, but haven't seen it as yet. Will have to give it a look-see now. My fave movie is Fried Green Tomatoes...or maybe it's Steel Magnolias. I can't decide.

I love that movie too. Now I'll want to see it again.

I just came back from Netflix where I added the movie to my list...I don't remember reading about this movie before and it sounds fantastic! I love getting good movie suggestions:)

Are you having trouble commenting too? It is driving me nuts!

Oh this looks great! Sounds like something I would really enjoy seeing. Fun premise. xo ~Lili

Omigoodness, that movie looks wonderful! I haven't seen it yet, so I'm going to look for it.

One of my favourite movies is "French Kiss" with Meg Ryan, Kevin Kline and Timothy Hutton. It takes place in France, and the sound track is fabulous too. And at the end Kevin Kline sings "La Mer". In French. *sigh*

Looks like a great movie. Am going to have to check-it-out. Thank-you for this!

I'm going to put it in my Netflix queue again. Great movie, loved the ending!

Harold and Maude ~ I'm not sure if this can be found anywhere besides an old VHS tape. Cat Stevens soundtrack. Offbeat but very very chick flick ~ Lillian Gish and Bud Cort.

Corrina ~ or is it Corrina Corrina?

I havent seen this one Kate. I need to watch it . Im sure it has to be good. Next time Im out camping Im going to stock up on movies. It was -1C here last night. Im off to plant the rest of my flowers. I think we can finally say we have spring with summer a close second.
Have a wonderful day.

I've never seen this, but now I will definitely make the effort to go out and rent it - thanks for the heads up, it sounds wonderful!

We all need a good chick flick every so often. I will have to check it out, I love Kate Capshaw and Ellen.
Love, Actually is one of my favorites ever, I watch it whenever it is on. Last night, just by chance, I watched Field of Dreams again. So good.
Hope you are enjoying your long weekend!

Where have I been?
Oh that's right--hubby won't watch chick flix--that's where.
It's Matt Dillon 24/7--and no, I'm not talking about the actor, I'm talking about the Character! And yes--he has all of the episodes, thanx, bye.

I agree with you about this overlooked little gem, the characters and dialogue are well written and the storyline is a joy watch unfold.

I bought this when it came out and have enjoyed it on numerous occasions.

how did i miss this movie all these years ?
wow. another one to add to my list !!!
xo

I don't remember hearing about this movie when it came out. It sounds delightful, right up my alley.

I will definitely rent it soon.