He called me Sugar

Thank you so much for your wonderful comments from yesterday’s post ~ the one with the raindrops on the pansies. I loved how those photographs came out and am so glad you did as well. I had some excitement this morning when a couple of readers wrote to say that one of my entries for ‘action’ is in Group 5 over on Pioneer Woman’s site. Woot! It’s pretty much of a thrill to have a photo featured over there, especially when there are so many entries. Blogging friends Beth McWilliams and Bush Babe have theirs featured as well. Beth's is in Group 2 and BB's is in Group 4.

I’ve got a few photos from the rousing weekend we had here at the manor house. The weather forecast called for nothing but rain, so it was an unexpected pleasure to have the sun burst through the clouds early Sunday afternoon. Although it was a pretty steamy day, it was a good one. 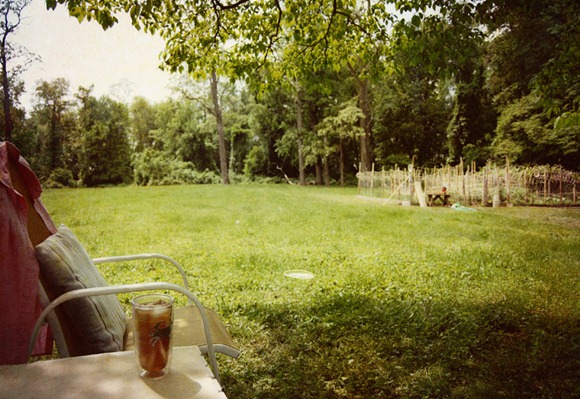 After we had our chores done, my husband and I relaxed under the shade of the dogwood tree out back. I took this picture from his chair, after he’d gone inside for something. 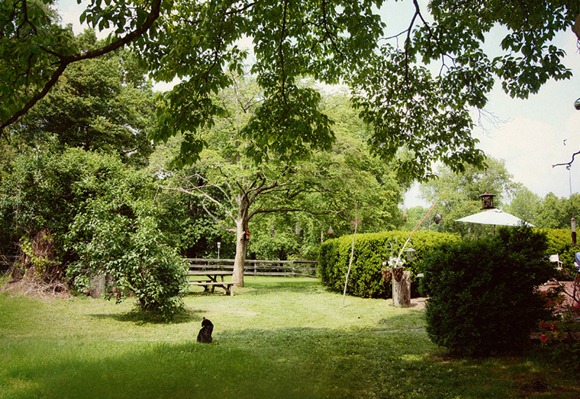 The view from our seats. The patio by the breakfast nook is to the right. 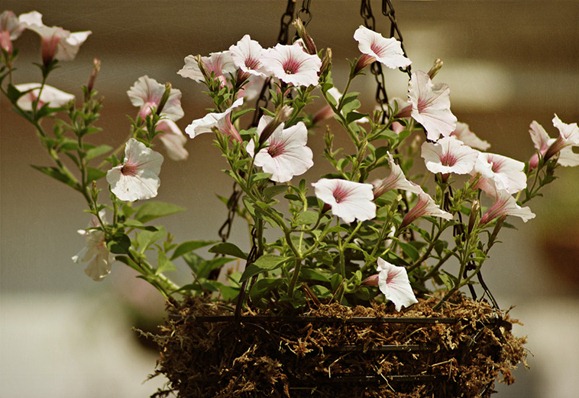 I got some more plants potted and some baskets done, lining some with moss and then ran out of planters.

My husband bought a weed whacker this weekend. It’s a gas-powered Stihl and he was actually happier than I’ve seen him in awhile. He also bought a pair of headphones to drown out the noise of the engine. These have a built-in radio in them.

This is a photo of him as he’s heading over to give the headphones to me because a song came on the radio that he thought I would like. I didn’t know he was heading over to where I sat when I took the photo. And honestly, he’s not always this sweet, but when he is, life always feels better. Here’s the song he brought me:

Pink – Glitter In The Air 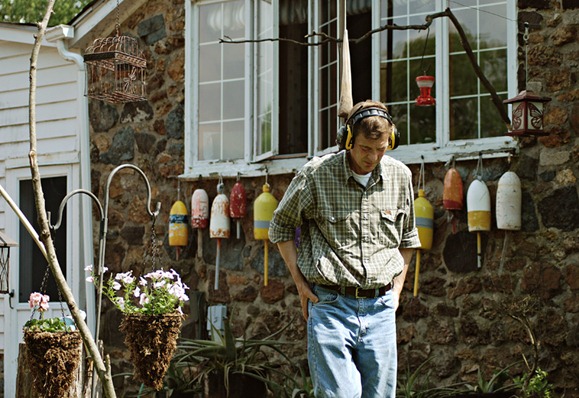 The reason I have no planters is because someone has used them for all of his giant aloe plants you see there against the stone wall. There’s at least a half dozen of them and they’re in my biggest and nicest planters. But I don’t care if it makes him happy. They’re only planters, after all.

And hey, maybe we can whip something up using aloe juice. Got any recipes? 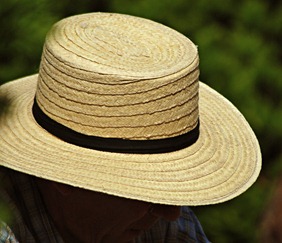 I live with an Amish man.

Anyone who knows my husband in real life knows that he wore an Amish straw hat for years when we were young. It was practical, he said.

He hasn’t worn one for about 20 years. But he bought one over the weekend when he went to Amish Land to get supplies. 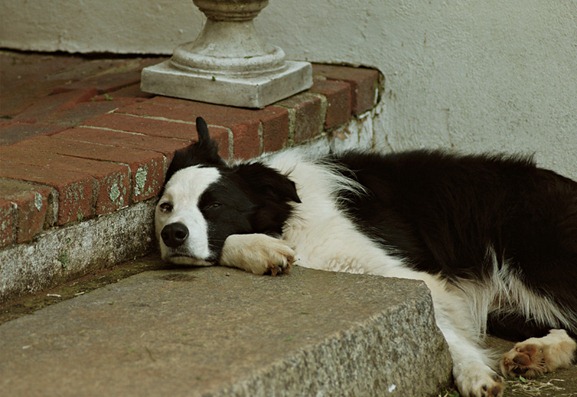 We wore the dog out. 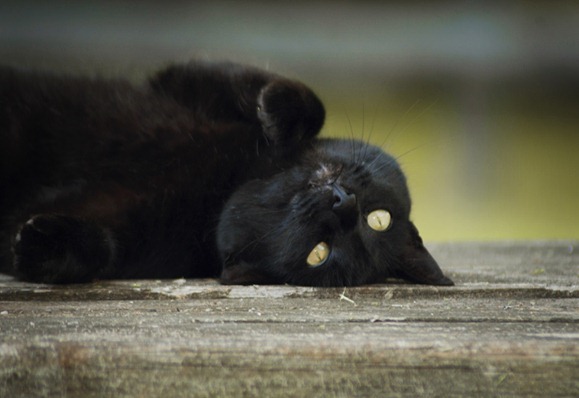 The squirrels wore the cat out. 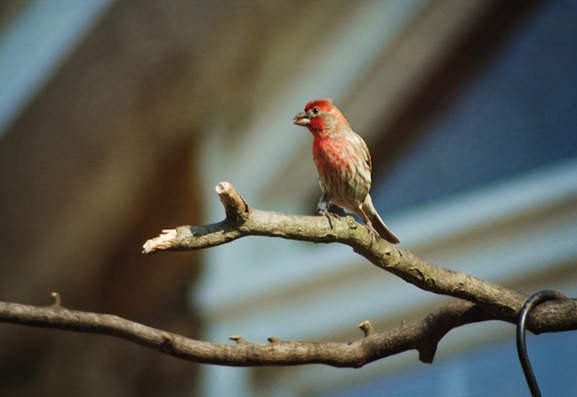 I sat in the shade Sunday afternoon, hoping to catch some goldfinches at the feeders but they were playing it cool and staying away. I did catch this male house finch, though. 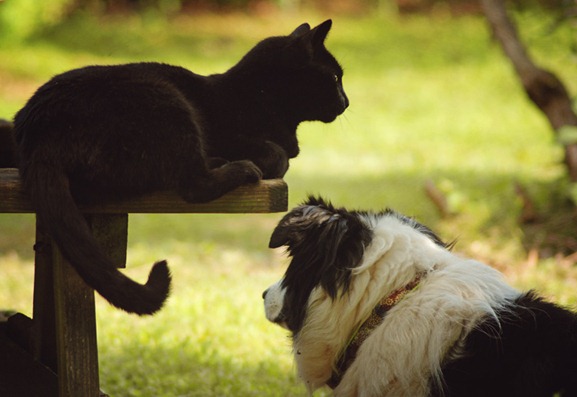 And these two. They make a cute couple, don’t they?

Thanks for coming by. It’s always nice to have you visit. Until tomorrow, then . . .

Your critters are just gorgeous.. love those last few pics.

nice photos....love the one with your furbabies...

My Aussie-dog has been a squirrel-chaser - until Saturday when he turned into a squirrel-catcher and -eater. :-( Unlike your husband, we LIKE our beautiful silver-grey squirrels and enjoy them at our feeder, so it made me very sad....

On a happier note, that photo of a tuckered-out George is priceless!

Congratulations on the photo! I entered one for the first time.
Love the photos of George. He does look worn out.

Congrats again... cute pair shots of pooch and pussy! I was blown away to have one of my entries picked this assignment too - won't win of course, but fun to get that far!
:-)
BB

Love the photo of the tired dog and cat. Those are great. Nice photo of your husband and mine IS AMISH. We met in Toronto but he grew up in Amish country near St. Jacobs, Ontario. He owns one of those hats too but never wears it.

BB ~ I didn't know that. I fixed my post to include you. Never been in one of her assignments when I've known so many people in the different groups. Pretty good.

The picture of George lying on the steps looks like his head and paw are detached!!! You did wear him out!

What a lovely way to spend the weekend and how sweet of your husband to share the song. Now I'm off to check out your photo over at PW and those of your friends...woohoo!!

congrats to you (and sweet beth!) i still love that wall of floats behind your hubby...

your week end sounds like ours...i love a relaxing one....lots of rain here in sunny calif...george looks fluid, poured over the steps.
wonderful....don't you love when the husband thinks of you and a song? so sweet.
bv

Yay for you! I will go over there next to check your photo out.

It is nice when they are sweet, isn't it? Especially when it's for no reason.

I need to get my hanging baskets up and filled too. I always spend too much time fussing over my baby tomato plants, then it's halfway through summer and I decide to buy flowers.

It's raining too much here to put out plants - at least for me!

I saw your photo on Pioneer Woman today... a huge Congrats to you!

Glad you got your chores done so you could sit and relax and take some more great pictures!

Tell your husband to empty the gas from his weed whacker when he's finished or put some fuel additive in it for the ethanol. We ruined a bunch of gas powered stuff because we didn't know that the ethanol would ruin the fuel lines. He might already know this:)!

you are the best!

Beautiful images, love how the animals are worn out.

Such a lovely post. My fave is George all tuckered out! What a great capture.

Again, congrats on the PW post and shout out to BushBabe and Beth who made it also! Each one of you should win!

Loved your post and photos. The photos of the dog and cat resting made me giggle ! Have a wonderful day !

Thanks for sharing your weekend. Looks like a nice day was had by all. Oh and by the way, today you are one of the finalists!

Love all the photos from today, and yesterday too!

Congratulations! I see this morning your photo is a Finalist over at PW! I'm rooting for you to win!

I think this is the first time I've seen a glimpse of your husband from the front Kate! Maybe someday he'll even pose with that cool hat too. And how sweet of him to make a point to share that song with you. Congrats on having PW share you action image over there, that's exciting! xo ~Lili

So nice to have a little visit with you again Kate!
What a sweet man to bring you a song like that...its the little things that mean so much :)
Love your furry friends..always so expressive!
Have a sweet day!!

I had no idea you married an Amish man. Where have I been?

and i can't even tell you what pink's song glitter does to me....it's been one of my favs ever since she performed it on the music awards or whatever show it was where she was her own cirque de soleil {sp?}

and the tuckered out george made me laugh :)
xo

What a nice life you have- great husband, friendly pets, and a lovely yard to sit and enjoy. I see why you got "raves" on the pansy photos--they are exquisite. Mickie :)

Oh Kate, congratulations on having your photo posted on PW. That's fabulous!!! I loved reading all about your weekend, and I have to say that I laughed out loud when I saw that picture of "tired dog!" How adorable!!!
xoxo

Sigh. Your weekend photos are always relaxing. Thank you for sharing:)
And congrats on the PW photo group!

Congrats on the photo up at PW's place .. your photos dont need her validation, they are superb!!!!!!

I wish ToonMan would wear a hat like that vs his usual cap ... just sayin' ... and those headphones are da bomb!

Your picture is one of the finalists!! Yay!

Good luck with the aloe. I just butchered a huge aloe to make soap. Won't do that again soon. Harvesting the gel is like playing with whale snot.

Love his Amish hat... but I'm a hat person through and through.

I'm tickled about your photo's being a finalist, Kate! It is a worthy candidate amidst some very fine photos! I haven't been responding much lately, recovering from jet lag and then getting ready to travel once more, this time only 2/3 across the US. Love your posts!

Congrats on getting onto Pioneer Woman!!!
One of my favorite ways to unwind after a day of work is to sit out on the patio with My iced tea or my favorite lime beer and hang out with the dogs and cats--just watching them --and puttering with the garden, watering my plants. Only coming in when the mosquitos drive us in!

what a lovely post and great pics! I will have to look that song up...thanks for sharing.
Karen
karen_bremermann@yahoo.com

your posts are always so relaxing..... ahhhhh, I feel a little better now :)

Is the other name of the place where you live called Paradise !

I love the pictures of your pets !

I saw your finalist pic over on TPW. This post was so sweet--I love it when you post about your husband---it's so romantic--is that too sugary? I hope not!;) I love it that he calls you Sugar.

I would luv to go to Amish Land.

A little piece of heaven. That's your hill!

:) congrats to you and all of you

All I can say is, that was a lovely posting.

I think our husbands would find much to say to one another - at the very least, they could compare straw hats. Larry's favorite is a particularly disreputable straw cowboy hat - I won't even let him bring it in the house :)