On Sunday afternoon, I changed sitting spots in the yard in order to concentrate on the bluebirds rather than the goldfinches. It’s difficult work, I tellya, sitting in the yard with my camera and the long lens. Some of you may remember the last time I tried to capture the elusive bluebird that has set up housekeeping in one of the houses along our fence line.

At times, I can accomplish much

I wasn’t very successful that time, getting not one single photo. Well, not one of the bluebird. 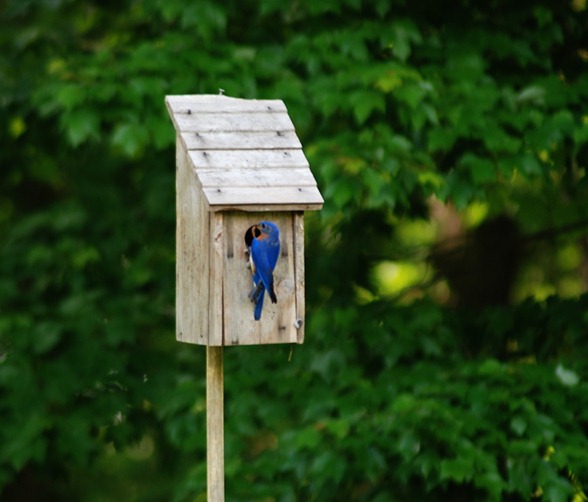 This time, I got several, although I’ve come to the conclusion that I may need a better lens. I had to keep inching closer and closer to the bird house because the 70-300mm only goes so far, you know. 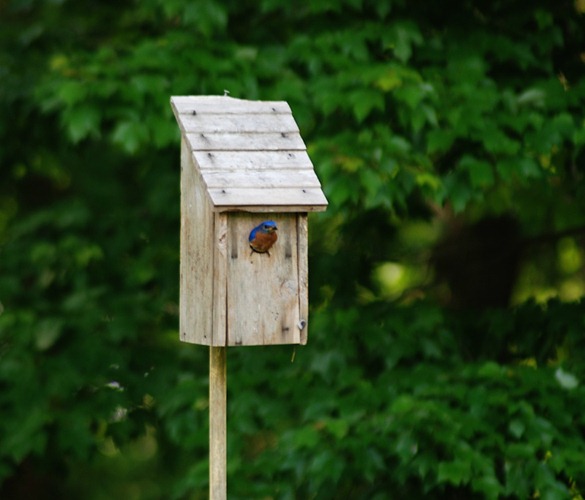 There were two bluebirds. This is the male. 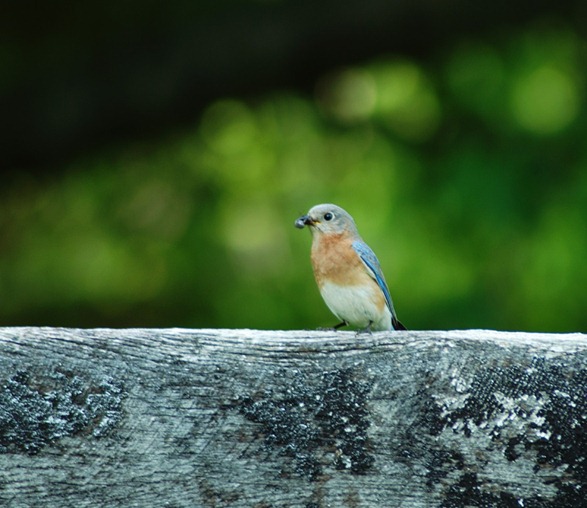 And this is his mate. She’s got some sort of insect in her mouth and it looks big and juicy. 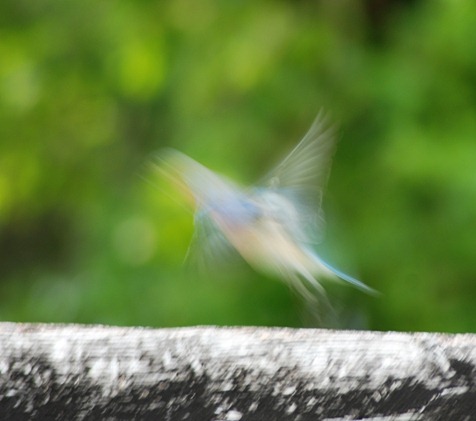 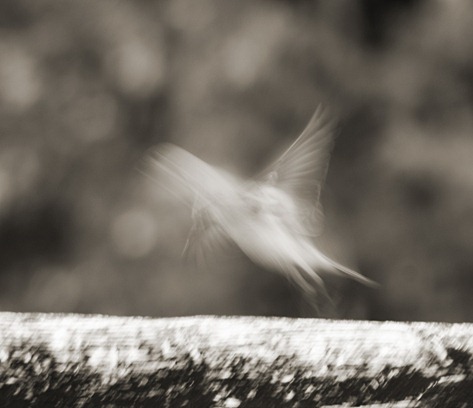 And this is her ghostly apparition.

At one point when I had moved to about 20 feet away, they were both on the fence line at the same time.
You can see that the male has a bright green grub of some sort in his beak.

The photo is really lousy though. I need VR on my long lens.

VR is Vibration Reduction. And I don’t gots it on this one. Guess that’s why it was such a good price ~ 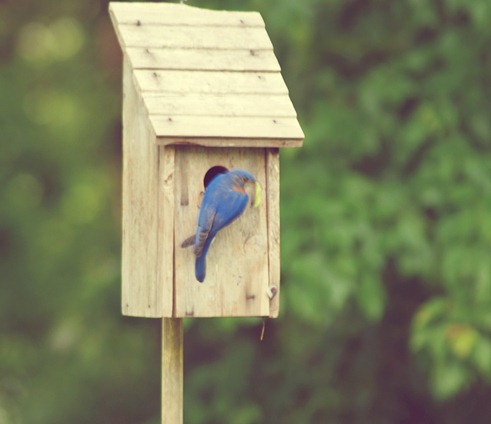 I love sitting in the backyard on a nice day and trying to capture bird shots with the camera. 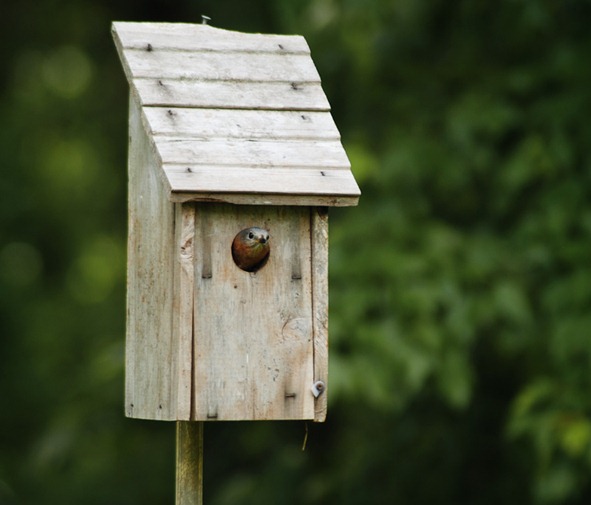 It was a feeding frenzy for them. The earth was soft from all the rain and if I hadn’t been there, they might have been more comfortable coming and going. And damn ~ those suckers really move fast, I tellya. 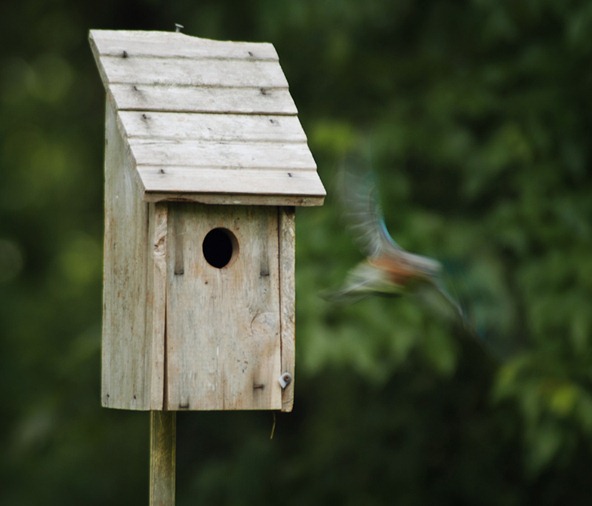 I do think I need another lens.

Thanks for giving my photo a shout-out over at Pioneer Woman’s today. I was really surprised to have made finalist and I’m not saying that with false modesty. I’m saying it because there were several bird shots within the six groups and I didn’t think mine stood a chance. It’s a thrill to have made the finalist category.

Thanks for stopping by today. Until tomorrow, then . . .

PS ~ I feel a Giveaway coming on, don’t you?

i recommend the Sigma DG 150-500 mm lens. my hubby gifted me with one a month or so ago and it has GREAT optical stabilization (and even auto focus!) but yikes! it's about what i paid for my first car... :)

Gorgeous shots! I was super excited to see your photo on PW's site too! Whoot!! I could not come close to getting shots like these!

I am never surprised when your photos are chosen in PWs groups or as a finalist :)

And it sounds like you're trying to talk yourself into a new lens in this post. Just go buy one! You know you'll use it. Heck... you've at least got a portion of the purchase thanks to being a PW finalist!

boy all that sitting really is tough....i'm starting to feel sorry for you :)

Kate I was so excited to see your photo become a finalist at PW! It's a fantastic shot and well deserved. These bluebirds are so beautiful...we don't get them here on the west coast so it's wonderful just to see the photographs!

good job on being a finalist! i will have to see if I can get some pics of the birds here in alberta to share with you....although i am not a photographer such as yourself!
Karen
karen_bremermann@yahoo.com

Love giveaways!...must be something in the air because several bloggers are doing it at the same time! One of these days I'll get up enough nerve to host a giveaway!

I have two lenses with IS (Image Stabilization) for Canon and they are awesome. Especially on the telephoto lens! I hope you're able to get a new lens soon!

Thanks for sharing the bluebird pics!

I am so so happy that you are a finalist over at PW!! Happy but not surprised since your photos are always great:)

Wonderful bluebird photos too...there is something about that bluebird of happiness thing because these sure made me happy!

well it's a hard job but someone has to do it...congrats on being a finalist...

I have yet to see a bluebird in my yard. *sigh*
I have VR on my Nikon 70-300. Thank goodness! But then, texwisgirl makes me wonder if I may want more!!! But then, don't we all want more lens!
Another congrats is due to you, my friend! woot woot woot

I know I've said it before, but I sure wish we had colorful birds here where I live!! I felt like I was living their life through your photos. Thanks!

Love these, I was doing exactly the same thing last Thursday, a male and a female were here checking out the birdhouse, I got a few shots, but I don't have VR either and none of them came out very well. Bluebirds are so shy!
I am secretly hoping they don't decide to nest, I love having them here, but I have seen my cat sitting on top of that birdhouse several times now...

good lens or bad, that is still a wonderful series of captures. Thanks for sharing Kate.

The birds peeking out of the bird house are adorable! So cute!! Good luck with PW!

They are my favorite bird and they are the darndest to capture!

I know exactly what it's like trying to get a good bird shot. A lot of patience is called for and your body starts cramping up from the awkward position you find youself in. Not to mention the squint eye you get from staring through the viewfinder for so long. Great captures.

Adore your bluebird shots. I've only ever seen a bluebird in real life a couple of times and last week was one of them, in the hills of North Carolina. Adorable creatures.

Adore your bluebird shots. I've only ever seen a bluebird in real life a couple of times and last week was one of them, in the hills of North Carolina. Adorable creatures.

Love these shots ... if you get a longer lens, you'll need a tripod or a schlepper ..

Papa has the Sigma150-500 mm and it is to heavey for me to hold and I dont like using a tripod sometimes even Papa needs a tripod just for the lens lol I like the camera in hand when photographing my subjects. I have lots of action photos of birds and my Miggy on my blog . Would like to share on that photography blog how to go about that. Love your photos they are awesome.

I came across your blog this morning and was so happy to see your bluebird pictures! I have five little babies in my bluebird nest right now. I have yet been able to catch the parents coming or going with my camera.
I really enjoy your blog and look forward to reading more!

Congratulations on being a finalist at Pioneer Woman!!! How thrilling and what a great shot too :)

You posted a comment on my picture when I was chosen in one of her categories (not as a finalist, just one of the pics) and it thrilled me cause I lurk on your site and "lurve" your photo's :)

I finally broke down and got a 400mm with IS (Image stabilization in Canon terms). Love it. Great pics, Kate! And guess what? I think we have a bluebird family for the first time ever this year! It has been so wet I haven't had a chance to get out there and capture them yet!

We have a nesting pair, but I don't have any good photos of them.

Congrats on being a finalist in PW's photo assignment. Woo hoo!!! I have always loved your photography, particularly bird subjects and (natch) George. Your lovely red cardinal firgures prominently in our bedroom. It will forever be a favorite photo of yours.

My mother had a thing for bluebirds...couldn't keep live ones, so she bought glass ones. So I have a thing for them, too. Your photos really came out so nicely--love the one with the little ghostly wings.

lovely shots....we don't get those birds here...they are so beautiful...

congratulations on the contest at PW.....nice going.

love.
and I'd be your schlepper.
in awe , always.

Oh Kate, these are marvelous! I don't think I would have the patience to sit and wait, unless I had a book with me, in which case I'd probably miss the birds altogether... :)
xoxo

Wow wow and even more wow! Such magical shots - a real bluebird of joy!

You still take pictures like nobody's business with your current lens Kate! Those bluebirds are gorgeous. xo ~Lili

one of the reasons i don't like my long lens either - you can't dial down for the faster speeds and my hands shake too much. still i adore blue birds

Your beautiful pictures remind me how much I miss bluebirds!

It is very difficult to get sharp pictures with a 300mm lens, even with VR. Have you tried to put the camera on a tripod (or a step ladder or the like) and shoot with remote release? Setting the ISO at 400 and fast shutter speed will also help.