I took a small walk after dinner tonight, taking the camera with me just in case. The sun was setting and there was one patch of golden light left in the yard, so I made tracks for it, settling myself against a tree to feel the warmth of the waning sun. I saw George off in the distance and called for him to come – and as he did, I lifted the camera and took a couple shots. 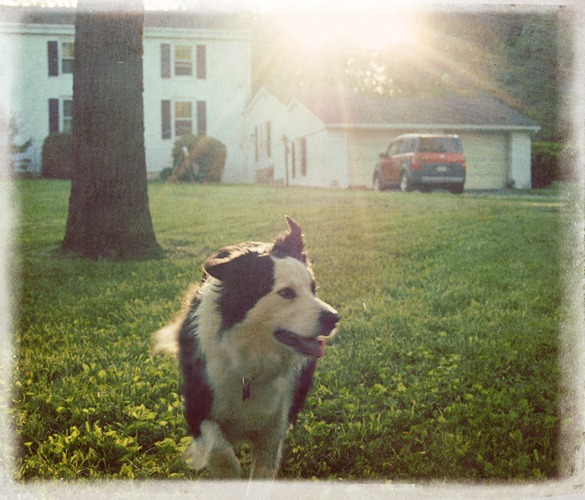 It wouldn’t feel like Mother’s Day if I wasn’t working on container gardens, so this weekend I went out and bought some flowers and potting soil. I also got some sheet moss which I soak in a bucket and use to line some of the wrought iron planters I have.

I bought two big bags of Miracle Grow moisture retention soil and it wasn’t until I was part-way into the second bag that I realized the reason the soil seemed so different was that I’d accidentally bought garden soil rather than potting soil.

I don’t know where my mind goes sometimes. 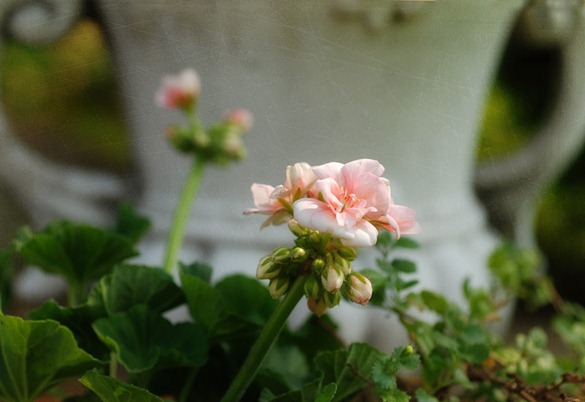 I think it will be ok though, don’t you?

For you photographers out there, there’s another photo challenge over at Pioneer Woman’s place. This time it’s ‘Action’. Sometimes I don’t know why I bother entering, but I do because although it’s a huge longshot, to have a photo featured on her site is pretty darn exciting. And to win something is incredible.

I’m not really an action photographer but I’m going to try to come up with something worthy.

But there’s a story behind it. (You knew there had to be).

Late last fall, when he was putting the garden to bed, my husband found a small tomato plant growing between the bricks of the patio outside the breakfast nook. He rescued the tiny plant, popped it in some potting soil and babied it throughout the winter. I had no idea any of this was going on. Then he put it outside last month and suddenly ~ 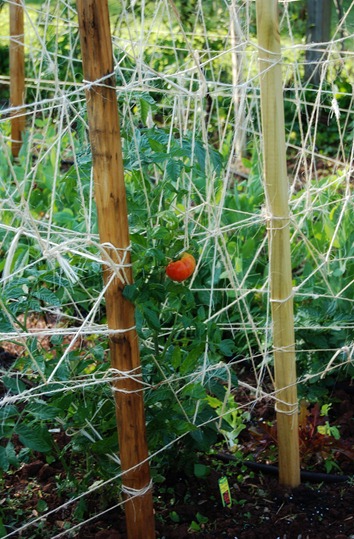 That reminds me of a sweet little song that a friend turned me on to  . . .

Have a beautiful week, all. Thanks for stopping by to visit my little corner of the world.

Oh, I just love that George. Great shot. I love to get ones of my Kane in mid run.
There is nothing like a fresh tomato off the vine. I've loved them since I was little. Hugs, Deb=^..^=x5

It must be a random kind of day! The title of my post today was Randomness! How funny!

Our tomatoes are still green but are coming along nicely. My hubby 'rescued' some tomato plants out of the old chicken run and kept them all through winter as well! Nothing like an extra-fertilized seed turned plant from chicken poop!

Thanks for the heads-up on the photo contest! I'm heading there to check it out!

Have a great night!

All of my plants get miracle gro soil, they all love it yours will as well... love the mater...

I love that your husband nurtured that tomato through the winter.

A tomato! That clever hubby! Also, I had never heard of Pink Martini (don't know why!!!). The song is delightful. Perfect for that little tomato. I, too, saw Pioneer Woman's photo contest. Nervous to enter ... so many many great photos!

i thought maybe the story was that you used a hot glue gun and glued the tomato on there.....i'm strange like that :)

well I entered an action photo..thanks for telling us about it...of course there are so many entered...but atleast I tried right...

Oh, the tomatoes look awesome, so professionally done. You should see mine...laughable.

George is so beautiful.
I cant get over the growth you have. We are just getting really green and getting the air seeder ready to seed our crops.
Loved your blog. It would be hard not to pick that tomato.:)
Loved your rose. So delicate.

mothers day and planting flowers ..i so agree with you!! happiest to you friend ..potting soil does not matter ..

I didn't know there was a difference b/w potting and garden soil. I thought dirt was dirt :) Given that.... do you think there is any chance that the little garden I planted with my 4 year old will produce anything at all? Oh well, we will have fun trying!

Action eh? Hmm, not sure how many action shots I have, except really blurry ones! I love that song, and I hope your little tomato hangs in there long enough to become salsa or tomato sauce or just plain salad...yum!

Great photo of George!
Love the little tomato. We're not growing any this year, but when we do..not too many of them get the chance to turn red. We love Fried Green Tomatoes!

I know why you should bother entering! Because you take wonderful pictures!!!

What a cute little ditty. Thanks for sharing.

Whenever I need to feel inspired or comforted, I stop by your post. I was fortunate to be invited to a small private concert by Pink Martini a few years ago. What a night!

How can you have so much greenery in your garden? Didn't you just have 2 feet of snow!
Keep entering PW's photo contests... you are very talented. It was one of your entries that brought me over to your blog and now I read you and PW almost everyday with my morining tea!

George is so pretty!

I saw the assignment on PW. Although I've entered others, I don't really have great action skills, so I'll probably sit this one out!

Thanks for your kind comment last week. That was very sweet to read!

Perhaps you should submit George to the Pioneer Woman contest! It's an action photo after all and I know she has a weak spot for dogs :)

A shame I don't have my camera with me. Oh well, maybe next time.

Thanks for the heads up on the action shot contest! I might just have one or two. Love that sunflare in that top photo!

I totally suck at action shots. I can never get the correct adjustments on my camera which go to show what an amateur I am.

I hope your container gardens grow better than mine usually do! The Geranium color is quite lovely.

Love your first photo of George !
I have hundreds of Action photos of Miggy, I use the sport mode for that and have my camera always have my camera on Manual. The garden soils will work just as good for your planters I use it in planters sometimes never a prob. Have a great day !

What a beautiful little tomato, and such a nice surprise this early in the season, even if your husband did baby it along. And I always love your shots of George, such a handsome devil that one. :-)

I love Pink Martini! And it doesnt matter which Miracle Gro you use, I personally think its all the same they just package it differently .. Annie brought me a HUGE sack of it and this is the 3rd spring I am using it in my window box .. we have little morning glory plants popping .. I have to take some pix so I can show their growth .. deborah kitts sent me the seeds ... oh look I wrote a whole post here in the comment section ..

You have great action shots of George!
I am jealous of the red tomato. Enjoy it!

Interesting string technique on tying up his tomatoes.

Adore this song that goes just right with that sweet red tomato!

I have a feeling you will do just fine getting some George action shots....BTW Pioneer Woman was profiled in this weeks - May 9th - New Yorker magazine...very interesting!

Thanks for the song!

hi kate...what a great shot of george...i am so happy to stop by today...i just am coming out of a 6 week "blogging slump". i don't know what that was about....but i am happy to be back visiting with my favorite blog buddies....like you and george !!!!

I bought that Miracle Grow Water retention soil too!! I thought I had watered it enough, and planted my plants in it, and let it be. Well it rained Saturday night here, and in the morning, I had huge chunks of soil pushing up out of the pots!! The rain must have made it "plump" even more! I had to take some out. so at least i know it holds water!

What a lovely, classy little song! Loved it! I noticed they are playing near me in July, on my birthday too!

Thank you for sharing!

I'm lovin the color of that geranium...

First time to your site - I'm bookmarking it!!

Love the photos! And really enjoy your blog.

please share your awesome string method for staking tomatoes I have never seen it, and LOVE the blog! New here!

Wow--it would be hard not to sneak over and pick that tomato if I were your neighbor!;) I'm so tired of the "cardboard tomatoes" at the grocery, I don't even buy them.

If I were a girlie dog--I'd want to hook up with "Mr. Black and White" for sure.

Your husband nurturing that tomato plant over the winter is so wonderful! And I just adore the bamboo and string tomato cages, mine are those boring wire ones. Good inspiration for me to see. xo ~Lili

wow. very cool. my tomato plants are waiting for memorial day weekend to be planted, they are about eight inches high. red tomatoes are a long way off....