It was a glorious weekend here in Maryland, and I accomplished my single goal of tidying up and planting a few things in the yard. I took it easy with the darn knee, and transformed the garden area under the dogwood tree into something very eye-pleasing.

And in my leisure time, I photographed the birds. I do hope you’re not getting too tired of them. Most of these were taken in the early morning while having my coffee on the back patio. 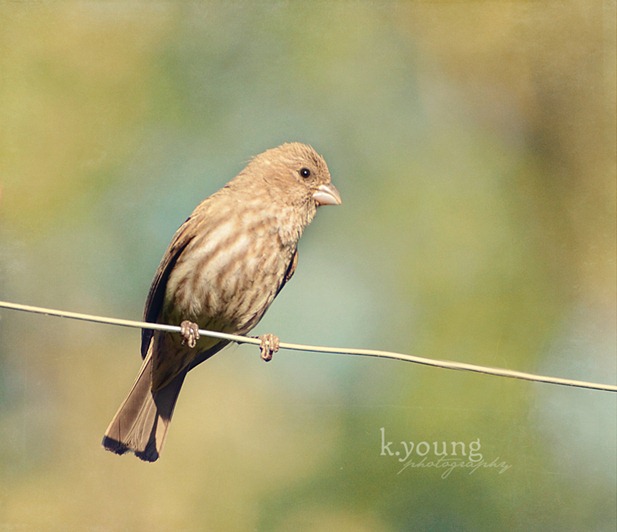 The least shy of all the birds who visit our feeders seem to be the house finches. 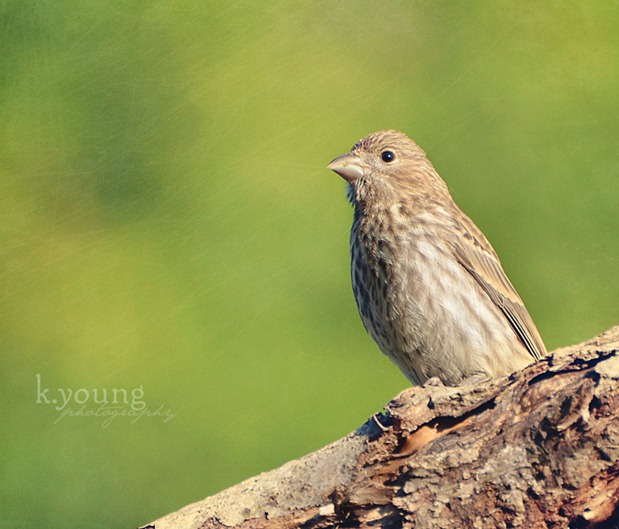 And maybe it was because it was Mother’s Day weekend, but I ended up taking images only of the females. 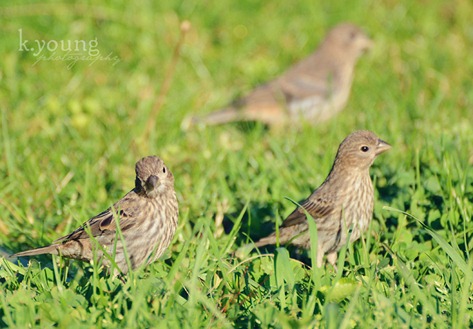 And some young babies.

They chirp a lot.

Especially when they’re learning to fly. 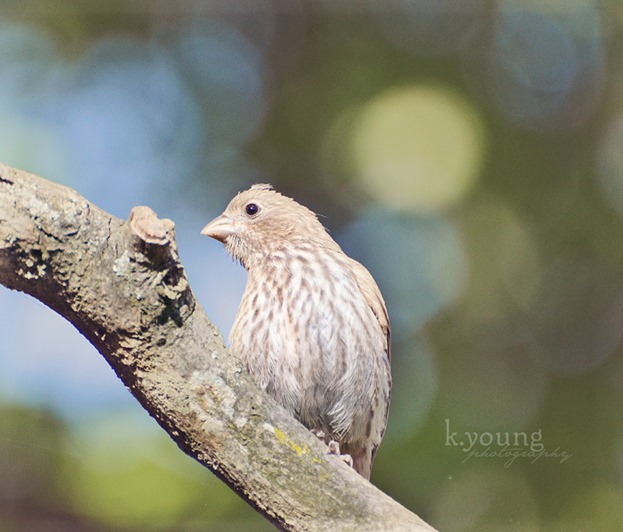 Although I added some textures to these photos, the bokeh is completely natural; above it was a combination of the leaves, the sky, and the lens. 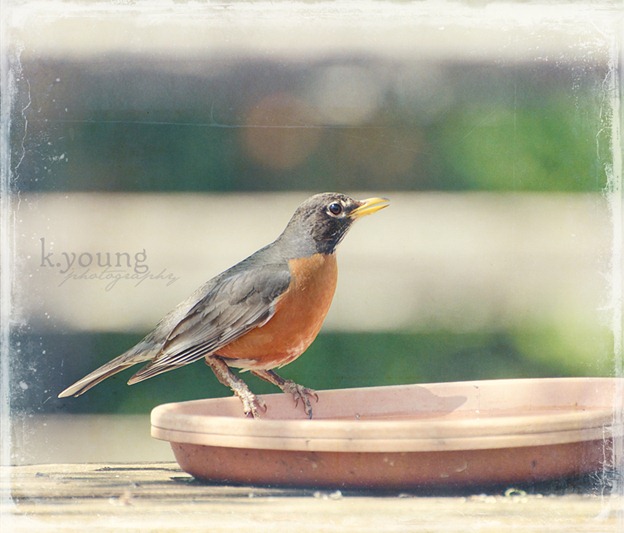 A robin takes a drink. 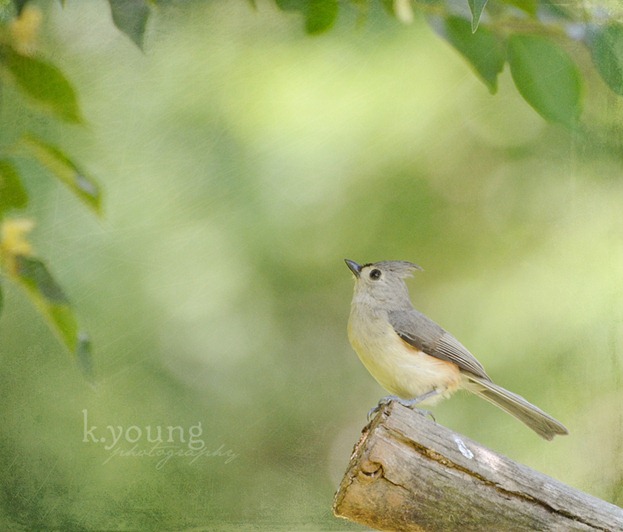 While a tufted titmouse looks for enlightenment.

Or she’s just looking at another bird. 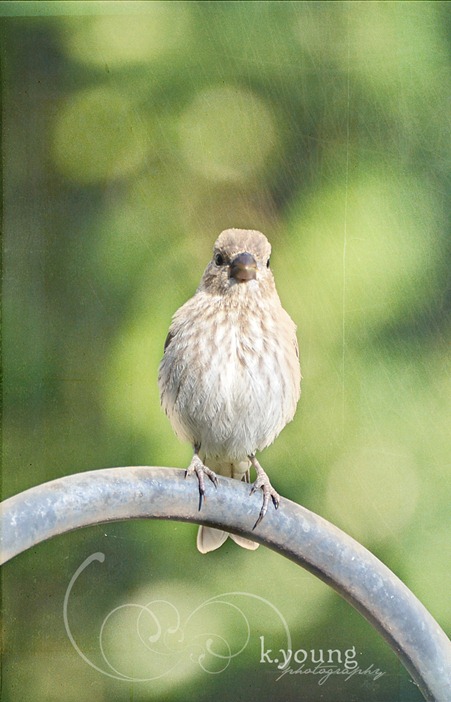 I watched two movies this weekend – one a beautiful Swedish film that starred Michael Nyqvist as a famous conductor who returns to his hometown after a tragic illness. He eventually ends up leading the church choir where he comes to find joy again through music.  This was a very touching film and I recommend it.

As It Is in Heaven was nominated in the 2005 Academy Awards for Best Foreign Language Film. It’s available for streaming on Netflix.

The other movie was just for fun. Cold Comfort Farm stars Kate Beckinsale as a young society woman in 1930’s London who suddenly becomes orphaned. She takes up residence with her oddball relatives at a farm where all is chaos until she brings some order and a little class into their lives. Ian McKellen gives a great performance as a fire and brimstone preacher. There are some hilarious lines in this movie. Good and campy, and available for streaming on Netflix. 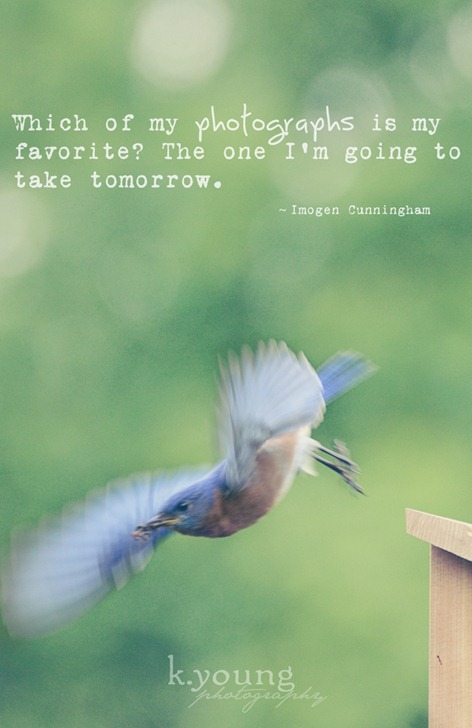 I hope you all had a wonderful weekend. I did end up making that strawberry rhubarb crumble, and it was delicious.

Hope the coming week holds some joy for you. Until tomorrow, my friends . . .

One can never tire of pictures of birds. I esp. like the ponderer. Have a good day and week!

I love your bird photos . as I to love photographing the birds we have here lol. Sounds like a perfect day to me my kind of day . I had a wonderful day as well . Have a good evening !

I love them too. They are all so beautiful. Happy Mother's Day.

Hope you had a Happy Mother's Day!!

I never get tired of your photos, especially the birds.

Happy Mother's Day to you!

Happy Mother's Day to you Kate! These bird photos are a gift in themselves! Gorgeous!

I can never pronounce bokeh with a long a like that...it always comes out with an "uh" at the end:)

That foreign movie recommendation sounds right up my alley and I now added it to my Netflix list...it is number 92:)

I watched a couple great movies over the last few weeks streaming with Netflix ....

Queen to Play - (French movie but had subtitles) thought it was awesome!

Yes, yes, I love your birdy pic's. You inspire me to get better at it. Thanks. Carla

I love the signatures you've got in these photos!... best yet!...

The robin picture is beautiful.. something about it says "mothers day"....

pretty birds.. lovely words .. its monday and I wish it was sunday

I love house finches! Of course--the awesome bluebird shot was my favorite. They were my mama's favorite bird, and I still miss her so much---it was like a sweet "hello" from her.

Hope you had a happy Mother's Day!

I loved the quote about your favorite picture being the one you will take tomorrow!

Nature has so many opportunities for seeing beauty! I never tire of your bird photos. I was on esty looking around and came across a painter who did a beautiful cardinal in the snow... reminded me of your picture, then I saw that she used your photo! Both the photo and painting were great!

I really want to learn how to do this.

Just need to sit down and take time.....

I love your robins - they are so different from here. foreign robins!

Of course I also adore the tufted titmouse - you are so lucky to have all these birds - never tired of them.

love from Catalunya and the two collies k x

seriously. tired of your birds. not a chance.

and can you believe that i didn't watch one movie this weekend.....that is so not me !!

Your pictures are far too beautiful to get fed up with! My husband also loves your bird pictures, he's a total nature lover.

Breathtaking... divine. Will put those movies on the 'must see' list. For whenever I get time/don't fall asleep in front of tv!
:-)
BB

I never tire of your birdies! Love that last bluebird flying away! Wish they visited me.

Beautiful photos. I just love "Cold Comfort Farm". I hope you had a nice Mother's Day.

These images are nothing short of awesome, my dear friend! I hope you are printing some of them...

Loved your flower shots as well. Beautiful tulips for Mother's Day! Have a wonderful, relaxing weekend. It's beautiful here in Jersey. xoxo

So so pretty and uplifting to see all of these sweet bird captures. Your movies always sound so intriguing to me, I must take the time to seek them out and watch them. xo ~Lili