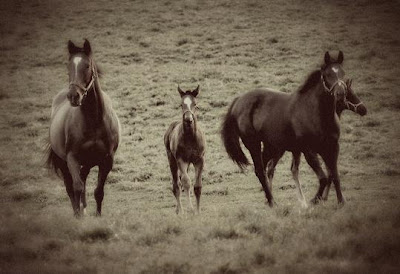 Sometimes I feel my age. I was kidding today around with a couple of the 8th grade girls, telling them I'd keep something they told me "on the Q.T." to which they replied, giggling, that they'd rather I kept it on the "down low". I laughed too, but then realized that I really show my age sometimes. 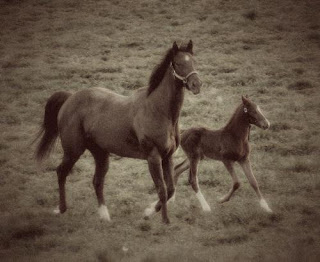 I got over the vintage feeling after I left work, though. I had to drop off some pictures at the local newspaper in a nearby town and as I was walking down the street, I got honked and whistled at by a truck full of workmen. At first, I thought it was someone I knew when I heard the honking, but when I looked up and realized that it was three men in a gigantic utility vehicle, I laughed to myself. In my younger days, I would have gotten angry and annoyed at people who did that, but when it happens now, it simply surprises the heck out of me.
Yeah, so maybe I'm not so vintage after all. It's all relative, anyway.
So, perhaps it's because I was feeling a bit old-fashioned today that I used Pioneer Woman's photoshop actions again, choosing the "Vintage" look for the mares and foals pictured here.

Don't they look like they're from an era long-ago?
It was another beautiful day in Maryland. I took George on a walk down to the tree my husband had told me about yesterday. He took pictures of it to show me what the flowers looked like. It's not a white flower like he told me it was and that's why I couldn't find the tree yesterday when I went looking for it. It's actually a string of seed pods hanging down. I took the macro lens and got some interesting shots that I'll post tomorrow.

Tonight at 6 PM is the Weekend Guessing Game. I hope that I remember this week.

Absolutely, positively beautiful!!
I know how you feel... Sometimes I feel older than the hills and other times I feel so cotton-pickin' young! LOL

My daughter walked past as I was reading and as a horse mad individual stopped and stared in awe at your beautiful photos, then she saw George, she thinks you have it all!!!!

I love it when I say something to a kid (that I think is pretty clever and spot-on as far as word usage goes) and they look at me as if I've suddenly grown 6 heads. It's humbling....or should I say vingaging...(sigh)
As always, beautiful photos.

Yes, sometimes when I use an expression from my youth, my boys stare at me, then put on that "well, mom is old" expression...

Love the vintage photos. They are fun to do up, aren't they? SuperGuy is refinishing an old Victrola that I want to photograph and do some Vintage actions to it.

Beautiful photos. And, congrats on the wolf-whistles...you go girl!

Beautiful pictures. WooHoo on the wolf whistles. They always make my day on the rare occasion it happens to me.

I love vintage things. I hope the I feel the same way when I become one. I think you are still a far cry from "Vintage" but I LOVE your pictures today. What is it about running horses that sparks energy inside me?

You kow how it goes!

...Beautiful photos! I love that vintage look - you and PW have got that one down to a science...

...And "you go girl!" on the guys whistling! It does boost the ol' ego when that happens. Not that your ego or you happens to look anywhere near old by the way... ;o)

Oh Kate, the photos are fabulous! And your ever-growing lineup of pics in the sidebar are absolutely beautiful! When you make that book, I'll be your first customer. :)
xoxo,
Mary