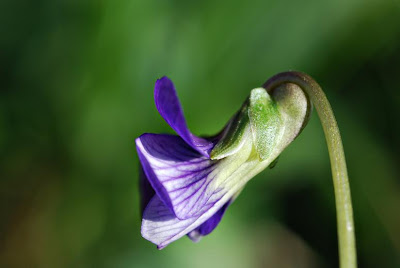 Today was a beautiful day in Maryland. The sun is shining, the grass is green, and everything is blooming. The temperature was nearly 70 degrees. So when I came home, I took George on a nice walk and brought along my macro lens. The first thing I saw were these beautiful violets. After taking several pictures, I continued down the macadam farm driveway and made a left onto a gravel farm road that turns into grass and found another bunch of violets that were even more purple than the first. 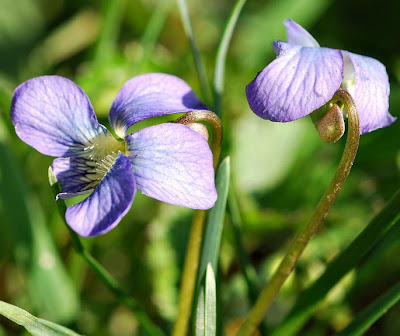 George stayed with me and practiced his heel. He will walk right alongside me and then I'll let him go off. While I take my pictures, he waits patiently for me by the fence. He really is a good little dog. 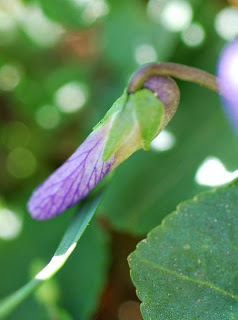 After we got home and ate dinner, I opened up my photos and was cropping them in photoshop and George was outside playing by himself in the yard. Our dog has all sorts of doggie toys, but what does he go for? In consecutive manner, he drug a big old boot around the yard. When he got tired of that, it was the old plastic milk jug that he's been playing with for months. 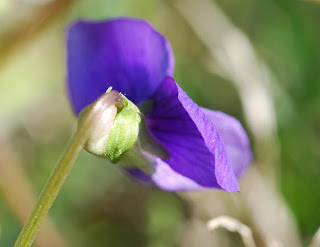 And when he was done mauling the jug, he gently pulled a stick out of his stick teepee that my husband built for him. Then he pranced around with that stick in his mouth for a bit, finally settling down with it between his paws. I could have taken pictures, but sometimes I think I just have so many George pictures, it's crazy.
Hope you enjoy these violets today.

The violets are beautiful!
And so is George!

I agree with Becky. The violets are beautiful, and George is my kinda dawg. I love border collies. They're so full of viss and pinegar. Of course he's not going to play with his dog toys! Have you told him he's a dog? He probably doesn't know! :-)

the violets are so pretty! But just so you know...you can NEVER take too many pictures of George!!

After seeing these photos, I feel as if I've seen violets for the very first time. Very lovely.... and simply peaceful.

What a great dog. I love my dog Ramsey, but he's a lazy butt who lays around the house all day. My hubby's dog on the other hand is a wild child that is my trial in life. Hearing about George makes me want to trade up. lol And your violets are lovely. I love spring when everything starts to bloom, it makes me feel more alive.

Nice photos - as always. Here in Iowa we are getting very, very, very (did I say very?) close to spring. The grass is green and I have heard a few mowers already. I am still waiting to see flowers but I know a few are already up...

I laughed at Josie's phrase about George -- "full of viss and pinegar"!! I need to remember that one.

Oh, thank you everyone. Good to see you again, Aunt Jo. And hello again to Becky.
Josie, I love your little viss and pinegar saying, too!
To Russell and Jeannelle in Iowa, violets are on their way to see you, too.
And Jeannelle, I think that's the most wonderful compliment I've ever received. Made my day!

Amazing close ups!!!
What lens are you using!

Nice to see you again, countrymouse. Yes, George is adorable.

Hey, Miz Booshay,
It's a Nikkor 60mm f/2.8D AF Micro Nikkor auto focus lens. Whew! I returned the Kitchen Aid pro mixer my husband bought me for Christmas and picked up this nifty lens. (It was his suggestion!)

So beautiful Kate. I have loved violets since I was a kid. Gorgeous and FREE! Well, excpet for the ones I decide I have to buy ;) It will be a few weeks before they show up here.

...Those are beautiful photos Kate! I tried yesterday to take a close-up shot of a daffodil with our rinkydink camera but it didn't turn out good. I can't wait 'til we get a really nice camera with a zoom lens and a macro lens - those photos are awesome! :o)

...I think George may need a friend. Possibly another puppy, no? lol... ;o) Anyway, there's a commercial of a dog like George pushing a lil' boy in a wagon - I always think of you when I see it!

tj, check your rinky dink camera for the automatic settings and look for the one of the flower. It's the close-up mode. Try that. I've taken some really nice close-ups with my little Sony Cybershot. Not as close as these, mind you, but they're not bad!

The violets are beautiful and George sounds like our dog Maggie.

Oh the violets are so pretty! A macro lens is definitely on my Christmas list.
xoxo,
Mary

Violets and Lily of the Valley. My favorites!

Wow, flowers, it must be spring there. I wish it would arrive here sometime soon.

Hello again, Dr. John.
Mary, excellent wish list, if I must say so myself.
I love lily of the valley. I've got to get some pics.
Hey again, Rising Rainbow. I see your name from blog to blog as I go. Glad you stopped by again.
You are welcome, my sister.