Turtles and swamp-rot: perfect together 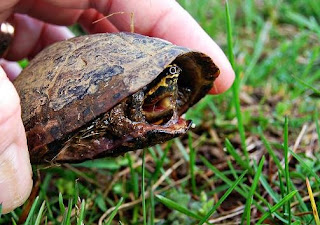 Yesterday, I ventured out for a walk on (gasp) uneven surfaces, which means a walk on grass and trails. I wrapped my knee in my Ace bandage and took the happy pup down and around the pond on a simple little hike. When I got to the ditch on the far side, I turned around and headed back home. Coming around the pond, I saw what at first looked like a rock just sitting there.

It was a turtle, hiding in its shell. So I ran (read: walked) back to the house to get my camera . When I got back to the spot, the turtle was still there, apparently waiting for his photographic debut. 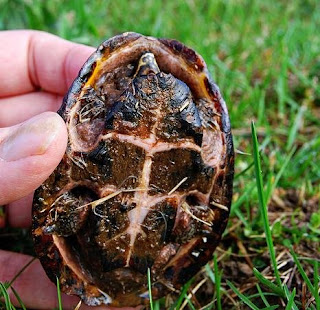 Although he wouldn't come out of his shell, even when left undisturbed, I managed to get a couple of pictures. For those who get grossed out over graphic nature scenes like this, I apologize. It really isn't that graphic, though.

I looked up turtles in one of the books we have at home, and found that this is a young snapping turtle. That was my husband's guess, as well. Snapping turtles love our pond and this one was coming from the wetlands and over the berm, heading for the pond.

He kept sniffing, or so it seemed, and his nostrils were huge. I put him back and George sniffed him for a bit, then went and treed one of the cats who had come down the hill to investigate. 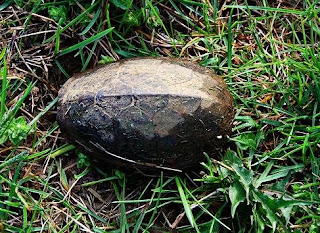 I put the little turtle down and sniffed my fingers and what an awful smell! I thought I'd smelled something bad. Now my fingers smelled like swamp and muck and I had an urge to run home and wash my hands before touching my camera again.

But I'm not that kind of girl. I can handle the scent of swamp-rot for a little bit. 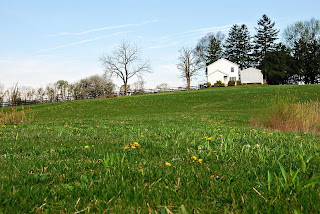 I looked up the hill and saw my husband working in the garden. It was a beautiful day yesterday, but later in the afternoon, the wind picked up and we had some gale force breezes going on. It blew like that all through the night and we had a little rain and some thunderstorms. Hope all is well in your neck of the woods today.

I loved the turtle post. The pond at our barn is always filled with turtles in the spring and summer. The kids enjoy watching the baby turtles, as they sun themselves.

Just returned from the Midwest Horse Fair. It was great!

HEADIN’ HOME FROM THE MIDWEST HORSE FAIR, at THE MANE POINT

MKust be the day for turtle pictures because I have seen them on several blogs. Liked your pictures.

I had a pet snapper for about 10 years. I found him when he was about the size of a quarter and let him go down in the creek when he nearly covered the bottom of a 5 gallon pail. Did you know that even one as small as the one in your pics can give you a heck of a bite? They don't just let go either. Thanks for the photo - I love turtles!

Instead of stopping to smell the flowers, perhaps one could say you'll never know what lies under a "rock". Great eye and great photos!

Fabulous turtle pix. It reminds me of one day I was taking the little dogs out for a break and saw three box turtle crossing the lawn in a row--like a wagon train. Now, I don't think that is ordinarily their mode of travel, so I can only suppose it to be some freak chance or sign of luck.

Now that I think of it, turtles are a sign of luck at any point, yes? Do you feel lucky?

There's nothing like the smell of swamp rot in the morning! Right? Great pics. There is something about turtles that is so intriguing. I love em.
I'm glad you were able to enjoy part of your day. We've had nasty winds here too.

Once in a great while we will spy a turtle but rarely. Beautiful photos and it looks so green now. I love spring.

Welcome, In-nickers and Ink. I'm so glad you stopped by!
Good to see you again, Dr. John. Thanks. I've been seeing turtles everywhere, too. I think they all got the idea from my site. (not really).
Dlyn, I'm so glad this snapper didn't bite me. I was trying to keep my fingers far away from his mouth, just in case it was really a snapper.
Thanks, Christine!
Cool story, Robin. I don't know if I feel lucky. I feel normal. Maybe luck is coming? Hope so!
Shimmy, too funny. Like Apocalypse Now, eh?
Egghead, good to see you again!

you need a good zoom lens so we could, you know, actually SEE you husband working in the garden. You don't share well with others...rarely a pic of him...

Cool.....I've never seen the underside of a turtle before!

What did the snail say as he rode on the turtle's back?

I don't know, Jeannelle, what did the snail say?

Kacey, he is not as cooperative as SG. In fact, he will turn his head when he sees the camera out! It's very difficult. I tell him he could be a model for Carhart, but he doesn't believe me . . .

LOL! I love your turtle ... :D Thankfully didn't experience any swamp rot when I found my turtle ... hehe.