I worked hard this morning, cleaning the house. I haven’t done a really good clean in well over a month, so this was a good thing.

After I was done, I treated myself to a lovely drink in the back yard where I took this picture of tree branches. I used Pioneer Woman's 'Seventies' action on it, making the sky a light pink. Then I added a texture I'd purchased from Joy St. Claire. 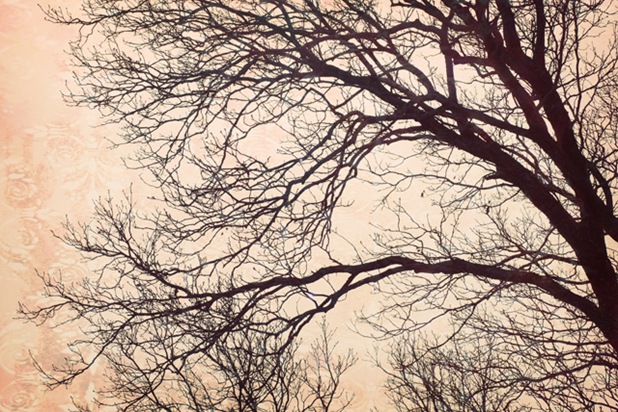 I was then visited by Blackie, who I also call Girly Girl. She was on the lookout for George who will chase her unmercifully. But Blackie can run faster and she has sharp claws. Blackie wasn't her original name. I think it was Bitsy or Biddy or something like that. My husband could never remember it and it was easier for him to call her the color she is, so it stayed Blackie. 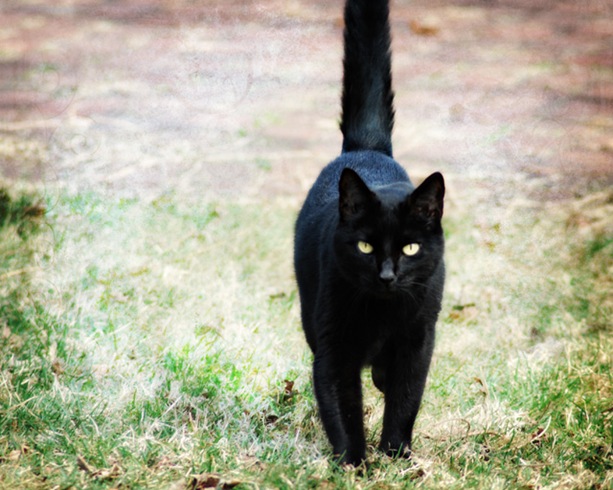 Tomorrow we’re having friends out, one who is visiting from New Mexico. It will be good to see them.

The pink sky above reminded me of this VW commercial I saw several years ago. I hadn’t known who Nick Drake was until I heard him singing Pink Moon here.

And in answer to some of your questions about the house:

No, I don’t clean the third floor!  On the third floor there are 3 more bedrooms. It’s mainly used as an attic. We have many of our things, still in boxes, in one of the rooms. And no, the house is not haunted, although a writer who resided here in the early 1900’s wrote a murder mystery while living here. William Edward Haines, who wrote The Black Doll, lived here in the early 1900’s.

Blackie, your visitor, has a double you will be interested to hear. My Blackie also has sharp claws and loves to play with Tess, my Border Terrier - it is lovely when a dog and a cat can be friends isn't it?

Thanks for answering my questions regarding the third floor.
And oh, love the shots.

Nice. Makes me want to be young again, or even just get up and go.

Wow - what can I say. My rear is now quite numb as I have sitting sitting here for over 6 1/2 hours reading your blog almost from the beginning. It is absolutely wonderful and the pictures are fantastic. I love to read and I have had more enjoyment reading your blog than any book. My husband also cooks all our meals and last summer he had a heart attack and it bothered him when I had to do the cooking and driving the car. He is fine now and back to normal. But I could really feel for you and all you had to go through. You are a very strong woman and I admire you greatly. I am now retired and I am not a photographer or an artisan but I do enjoy the hobby of miniatures and just started blogging at the beginning of the year.

Well, thank you everyone. And welcome Doreen! I've done that before: stumbled on a blog that I liked and ended up staying there for quite some time. And thanks for understanding. There are a lot of us out there with spouses and/or loved ones that have medical issues and it's great for all of us to have the support and understanding of friends.

love the edits and the day....

that is a beautiful kittie baby

I love that top photo! It is incredible. And Blackie is quite pretty too. Hasn't everyone had a "Blackie" pet in their life at some point?
Brenda

I totally enjoyed your post, even the VW commercial. I have always wanted a convertable or even a moon-roof. But they are not a good thing to have when half the year we are under the power of deep winter snow. Thanks for the ride.

I love history. It must be really cool living in such a neat house.

Love the kitty! Is George gealous?

Have a wonderful day tomorrow with your company. And, cheers;)

Yes, I love the house, (and the cat),but so glad to hear you don't have to clean the top floor as well. What a cool place to store stuff...can I send you some of my kid's stuff? Only joking..it is a long way from Australia!

Love the sky pic...very cool and mysterious like the black cat.

I'm in love with the pink sky picture...and the picture of Blackie!

Your house is just amazing...

I am loving that pink sky. The third floor sounds mysterious.

Wow, it is so hard to get a decently exposed shot of a black cat. Seriously. Great shot! And I love that you got the Joy St. Clair textures. Love those branches. :)

Can't say much about calling your cat Blackie when our cats are Pink and Green...

Happy Sunday to you, Kate.

Hello from france, I live in a big house too, and coincidentally i too still have boxes to unpack, even though we moved in a year and a half ago. What a lovely black cat,does she bring you luck? I used to have to ginger brothers who lived to be 16 . Now I have three large dogs and they keep me busy.

I wish I could figure out Photoshop. I'ma complete moron so...it's not gonna happen. Sigh.