My husband, the birdwatcher

I came home to yet another new desktop photo on our computer screen last week. My husband likes to change them all the time and frankly, I enjoy the variety. After I checked my mail, I told him that I liked the tree branches in his newest offering.

He told me they weren't tree branches. 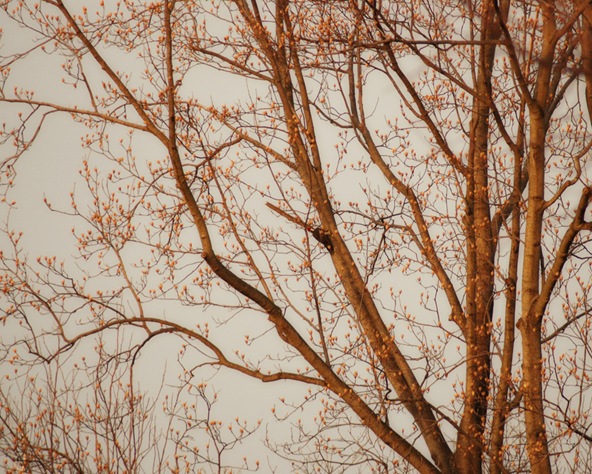 He told me then that it was a bird.

To which I ungraciously said something along the lines of what a great catch he'd gotten.

And then he told me what it was. And I took back everything I just teased him about.

If you look closely in the photo above, the bird is directly in the center.

My husband, as many of you know, is off work on disability because of his illness. He spends his days caring for George, our house, and taking lots of walks. He's also become quite fond of photography and he takes a pretty good photo. Lately, he told me, he's been seeing a Pileated Woodpecker flying by. It always sticks to the same flight path, too and he thinks he knows where it "lives", which is across the road at the end of the driveway in a stand of mature wood there, but he's heard it hammering in the hardwoods that surround the property on which we live. 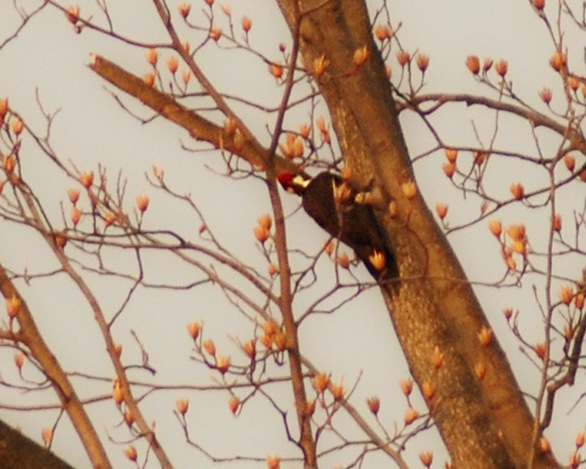 The other day he happened to have the camera and saw Mr. Woodpecker flying by. It landed in a tree and he raised the camera to begin taking photos when it flew off again. It's an extremely shy bird. He managed only to capture this one single shot, which I've blown up here. We both admit it ain't great in any sense of the word, but it's exciting to know this bird is close by.

The Pileated Woodpecker is a spectacular crow-sized woodpecker with a flaming red crest. My husband knew when he first saw this bird that this was a Pileated because of the great size, sweeping wingbeats and flashing white underwing that identifies this bird in flight.

The Pileated is usually a permanent resident, so hopefully we'll be seeing him again. Some interesting facts, according to Wikipedia about this spectacular woodpecker include:

The Pileated Woodpecker was the model for the cartoon character, Woody Woodpecker.

The sound a Pileated Woodpecker makes when boring a hole into a tree is so loud that it can be heard over long distances.

Pileated Woodpeckers have been known to move their eggs which have fallen off the nest to another location. This is a rare habit in other birds.

A similar bird, the Ivory-Billed Woodpecker, was considered extinct for many years until a series of possible sightings that began in 1999 which moved it off that list and onto the critically endangered species list.

And that, my friends, is the lesson for today. I'll keep you posted on any future developments. I'm sure you're waiting with bated breath, too!

Small photo above courtesy of Wikipedia and licensed under the Creative Commons Attribution 2.5 License.

You two are funny!!!

I am so jealous!!!! I have thousands of birds, but not one of these!! Even though I am constantly on the lookout for one.
Kudos to your husband for catching this photo!!

Great shots, beautiful bird, I had never seen a woodpecker like that one. The tree looks a bit like a magnolia to me, a big magnolia with small flowers.

Any time you catch a bird in a photo, it's thrilling. My hubby has been known to proudly show me a branch photo or two as well!

I've always liked woodpeckers. . .I had a brief parting with them when one kept drilling holes in our house in MA. They are a challenge to get rid of--esp. if they're pecking on the outside of your 3rd story.

When Hubby called the nature society for tips, they kept saying to us that it was illegal to shoot them. Then they'd offer to send him a permit to allow him to shoot them.

We are not gun people, and killing something would be an unlikely first choice for us to stop its pestering us. We kept saying, "You don't understand. We are trying to KEEP from having holes in our house! Shooting at birds on the side of our house with our inexperience would just make MORE holes!"

I LOVE woodpeckers and always have. My SIL got a photo of one earlier this year, and now your husband. I am envious - I hear one in my neighborhood and have seen him in the past, but not recently. Kudos to your husband.

I love seeing them. A couple of years ago I was laying in my hammock at the cabin and TWO flew in above me, just for a second but it was so cool to see.

Hey that's IS a great capture ... I have a similar amazing shot which sadly needs a lot more embiggening to see and then its a blur .. your lens is a lot better than mine .. my amazing shot got admired (oh didnt he have fun teasing me ... sigh) and then deleted ...

I LOVE pileated woodpeckers. They are indeed very elusive... they generally travel in pairs, so you probably have two adults in the area. Great shot! I'm green with envy.

Beautiful post, Kate. And kuddos to your husband as I have never captured the woodpecker at work but rather only the only evidence was the rat-a-tat-tats upward.

Wish we had that spectacular woodpecked here in UK - the nearest we have is greated spotted but he is not as big as that. Super photograph.

I was watching a Pileated this morning while drinking my coffee. They are so awesome! We have several in the area and have seen them up close on many occasions. Hopefully you will be able to get more great photos in the future.

We have one that comes to our back yard all the time. They are gorgeous to watch and believe me...you KNOW he's there. Great to get a good pic of him!

I love woodpeckers - and I love that he caught this. You are too cute together.

Oh what a find! We have two different woodpeckers here on Spruce Hill. A Northern Flicker and a Red-bellied woodpecker. They are both very difficult to photograph. The Northern flicker will come to our back door and eat seed off the steps. I have not been able to get a good photo yet.

Have you been to the Conowingo Dam to see the eagals yet? It is a must do for bird watchers and photographers. There are an incredible amount of them there to see and the experience is incredible. I am sure you and your husband would really enjoy it.

Oh that is a wonderful photo. Keep us the good work, hubby. I saw a woodpecker yesterday, but it wasn't a Pileated. I don't think we have them here in California. Mine was a downy woodpecker.

Hi Kate -
Another great picture from your husband. I thought the same thing as you when I first looked at it - beautiful branches, like a spider web. But the woodpecker was a bonus.

Please tell you husband that I continue to enjoy his eye on the world.

Great capture! We have seen woodpeckers here in the high desert of NV. I think they are migrating when we see them as they don't stay around very long.

Ya'll are funny. Is that tree budding already?

What kind of tree is that? Wow, you are much further along on spring coming.

What a wonderful photo to be able to take.

Fabulous pictures, we had one in a tree close to my office window not long ago. I wasn't sure what it was.

Don't get excited about the tree blooming. There's nothing blooming around here. That's a tulip poplar with last year's deadheads left on it.

My husband was surprised there were so many comments about his woodpecker.

By the way, I have been trying to write you about the boots, but my email won't send. Gah. I love them! More later.

Great to get that shot of the bird..! Disappointed to know that tree isn't in bud...it is still a good photo of the tree too!

Sorry to have scared you...I just knew she was gonna be mad at getting more snow.

What a great catch! Is that a tulip poplar he's working on? I've seen them around here occasionally, hear them more often, but have never had a photo op.

Wow! A beauty! I saw a woodpecker the other day as I was walking through the woods, tried for a picture but don't have much of a zoom. So I just stood watching it peck away. Something magical about them. I especially love that close-up!

I love pileated woodpeckers. There was a misty morning about three or four years ago when I quietly left our front door to enjoy my coffee on the porch. We had five poplars in our side yard and on each tree there was a pileated woopecker. They were all in the same position of each their own tree. I could have just stopped forever in that moment. Fog wrapped the bottom of each of those trees and I felt like I had been elevated to heaven. (Unfortunately we lost our trees. They were infested with ants. That's why the birds were there in the first place.)

Who knew a woodpecker could excite me so?

Thank you for the woodpecker lesson. I have sited a woodpecker at a tree in the backyard when I'm home on the weekends, and he/she too stops at the same spots in the tree and then moves on. I know it's not the large version in your photo but still a welcome site.

That's a fine-looking critter and I suspect you'll be seeing a lot of him from now on. Lucky for us, because so will we.