All the leaves are brown. And the sky is gray.

I can hear the wind through the thick stone walls of this house tonight. The trees on the property are almost completely bare, with the exception of a few brown leaves that still cling to the branches.

After dinner tonight, I was going through photographs and came across an old favorite of mine. It’s just a wine bottle stopper, but it is a photogenic one, is it not? Then I found another bottle stopper in the files and before I could say ‘Martin Ray Chardonnay’, a theme was brewing. 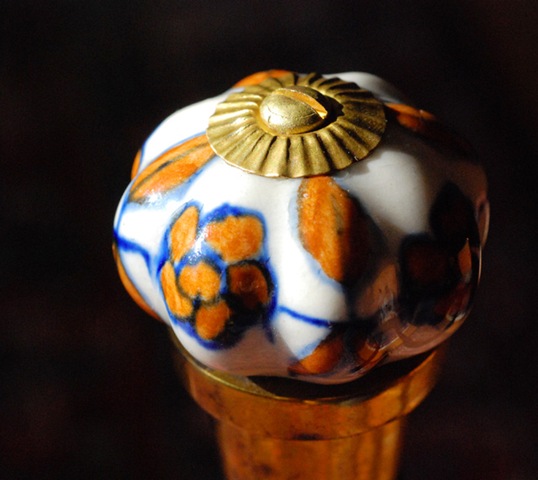 So, for what it’s worth, here’s my paltry selection of wine bottle stoppers.

I bought the one pictured above at the gift shop at Barboursville Vineyards in Virginia. It was made from a drawer pull.

I loved the colors. 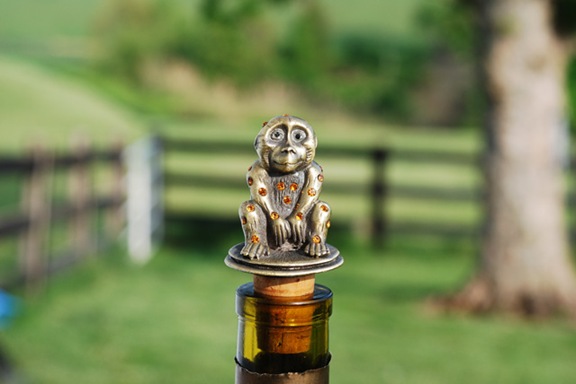 This is the monkey stopper that recently broke. I wasn’t terribly upset, although I love those little amber jewels on Mr. Monkey. 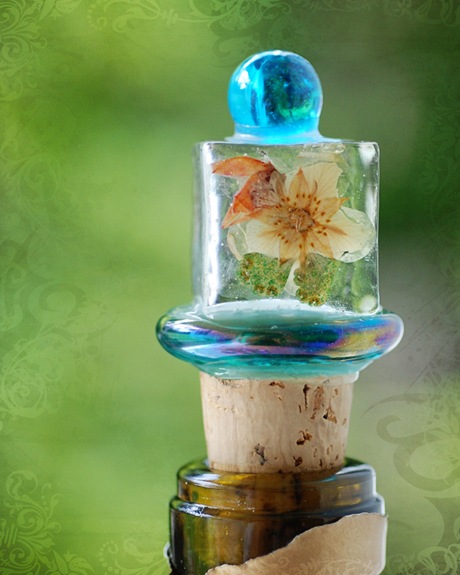 This is the one I reach for all the time. It’s not glass, although it looks that way. I bought it at The Village Craftsmen, a gift shop on Ocracoke Island, NC. The owner of the shop is Phillip Howard and he’s descended from Blackbeard’s quartermaster, or so it goes.

After uploading the selection of wine bottle stoppers into this post, I remembered that a couple of people had asked me to show before and after pictures. I’ve done this in the past but it’s been a long time since I’ve posted about it.

To those who aren’t into digital photography and photoshop, I apologize for the following offering. 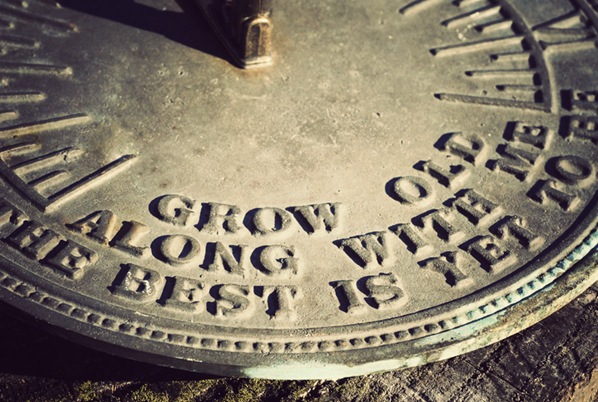 This is simply a picture of an old sundial that my husband found on the property somewhere. I’m using it here because it’s simple.

I opened the photo in Photoshop (I use version CS2) and duplicated the picture. (Never work on an original, but you knew that). Then I ran an action that I purchased from Florabella yesterday called Vintage Summer. I reduced the opacity to 78% by using the opacity slider on the layers palette at the bottom right of the screen.

An ‘action’ is a combination of many different steps, and is performed by the touch of a button. There are free actions offered at Pioneer Woman’s site, and you can also search for free actions to download. The free ones I have are PW’s two sets, a few from Totally Rad Actions, and several from Michelle Black. You can google them all, if interested. There is also a cornucopia to be found on Coffee Shop, a blog I visit often. 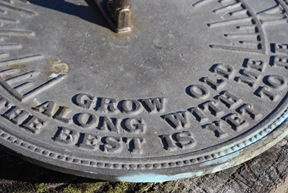 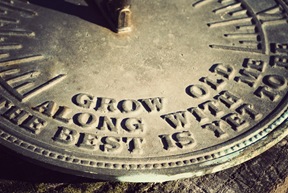 The original photo is on the left. There was bird poop that had dried to a lovely crust, so I cloned it out and used the patch tool on the big spot. I like the version on the right because it doesn’t have that dull gunmetal color. It’s now got a fine antique finish, with a hint of sunshine.

And that’s all I have to say about that.

Shall we meet here again tomorrow, my friends?

love that song...as for here, the sky is gray but the leaves are still colorful.
interesting post tonight, my friend.

Interesting post. You make me want to purchase and learn photoshop - it just seems so daunting to start from scratch . . . but I do love what you do with your photos.

Note to self: must drink more wine so I can buy some cool wine stoppers.

Love the wine stoppers. I have a few too but wish I had the monkey one!

The sky is gray today!

OK, here's the thing - until you wrote this post I had NO idea that you ought not work on an original photo...because I don't even know how to work on or crop or adjust a photo at all, much less apply a different texture to it.

It is very interesting to see the before and after shots. Both are beautiful, just so you know. You also used some terms that went over my head - opacity and layers pallette for starters. You have way more knowledge than you give yourself credit for.

Anyway, thank you and you should make this a regular feature here, because I for one enjoy learning about it, and you're a great teacher.

Cool, I love the wine stopper with the flower embedded in the lid. I can see why you use it so often. Thanks for showing the side by sides,it is always fun to see art in progress. Oh, and yes, you are an artist! Jeanne

Do you know Mary Chapin
Carpenter's rendition of this song? It's beaitiful.

I love the wine stoppers. I have one that looks like Georges Auguste Escoffier, the famous French chef.

How do you get your pictures so large on your blog? They always look wonderful...!

I love those wine stoppers. That not-glass one is incredible but they're all lovely. You could inspire me to drink (more). ;)

Ok - now I'm going to be seeing this song all day....just call me Mama Cass! It is one of my favorites! Your wine stoppers are AWESOME!!
And I LOVED your tutorial! I haven't worked with the full blown PS - just PS elements.

You do lovely work. I love the stopper with the slower. :)

I love your wine stoppers! I wish I had photoshop! I use picassa, it is nice but it can not remove poop from a photo :)

California (wines, vineyards) dreaming on such a winters day ....

Someone gave me a glass heart wine stopper, actually there were two which is a good thing because one broke!

Can Mr Monkey be repaired?

That's one of my favorite songs. I love your bottle stoppers.

I wish I had the talent in my photography that you do. Your pictures are amazing. And I agree with CBW about making this a regualr feature.

Note to self: Must buy more wine stoppers.

Before and afters are so much fun! Thanks for sharing...love the stoppers too ;0)

Wait. You have wine left over?

I love those bottle stoppers - what a lovely thing to collect. I think I like the first one best.
I keep meaning to have a look at Photoshop - the trouble is that once you get hooked on these things they take up so much time.

I like the monkey sorry he broke.
Wine stoppers would be a fun thing to collect yours are very lovely.
~~Love,Hugs and Good Thoughts~~

Nice Kate! In an effort to preserve our fiscal general picture and avoid the purchase of excess wine stoppers, I do my best to drink it all right up. I'm doing it for the country.

Love the sundial - and that photo editing software allows us to alter reality to suit us.