More fun than a barrel of monkeys

The wind is still whipping outside, but inside it’s warm and cozy and I’m sitting in the living room this evening just minding my own business. Suddenly, down the stairs barrels George, after I quietly asked my husband, “Where’s Mr. Puppy tonight?”

I call him that. I also call him Monsieur le Pup Pup and I say it with a French accent. I have serious issues, my friends, and one of them involves speaking to my dog in French. I think sometimes he actually knows what I’m saying, too.

And when I don’t know the words, I make them up. Who’s the wiser?!!

“Où est cette kitty vilain?” I ask him. He begins to look around. (Where is that naughty kitty?)

I don’t know why I do this. But it could be worse. Couldn’t it? Please tell me it could be. 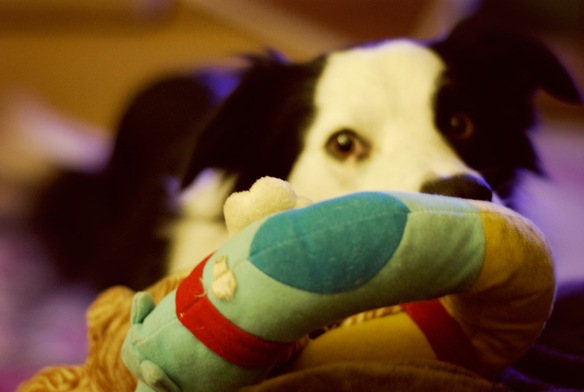 George wants to play when he comes downstairs, so he immediately goes to his toy box and drags something out. Tonight he’s brought his dog dog. (Mental P named this toy for us. It’s a two headed dog.) And just to throw a monkey wrench into the whole thing, my husband enjoys tying some of George’s toys together. So dog dog is tied with tiger here.

Are you listening? Because there’s going to be a test at the end of this post, you know.

I toss the toy and he brings it back to me and gingerly rests it where I sit. He doesn’t drop it at my feet because he knows I won’t pick it up. 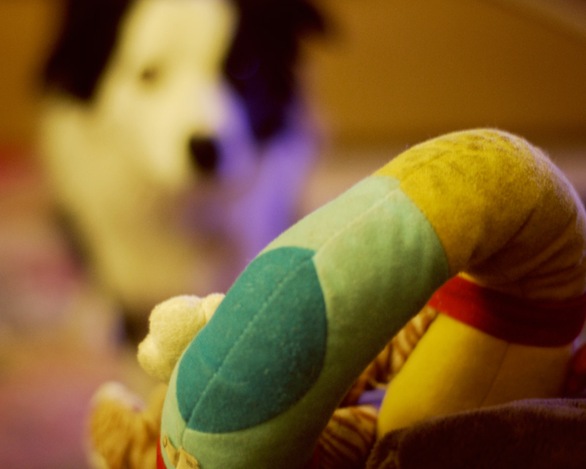 Then he slowly backs up. And waits for the toss. Dog dog and tiger seem to be tied together with dog dog’s collar, I notice. 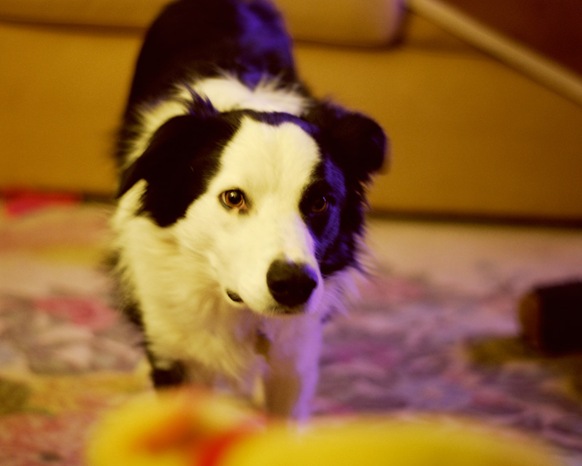 Waiting for that toss to come, which will go right over to that couch you see in the background. Notice the covering that’s all askew? It’s good that the photo stops there because pillows are everywhere, and on top of them are another half dozen toys. We toss the toys into the air and he jumps and catches them, sometimes landing on the couch.

Whatever would we do if we had proper furniture?

I used to have proper furniture. It was a long time ago.

And I lied about that test.

PS ~ Apologies for all the French stuff.

such fun, Kate. Good on you for the french..keep it up!
;-)
It doesn't matter what language we use for our doggie friends does it?
Love George. He is such a cutie pie!

I miss my dog. Must be about time to get another I think...mmm...maybe not quite yet! Maybe after my forthcoming trip to NY to see the family for Christmas..can't wait! Hope it snows!

This is too cute! I used to speak to my boxer, Star, in French. I taught her to sit by saying, "Assied-toi!" And to come by saying "Viens ici!" I'd also say things like "J'adore ma petite Etoile!" Dog lovers are such idiots, aren't WE? LOL

nothing else to say except.... You tOTtaLY cRaCK Me uP!!!! ....and you gave me some sweet memories of our late "sweet girl"...who played just like George. She was a Queensland. xo

Awwww...love that you talk to George in french. I talk baby talk to my dogs all the time. But I swear they love it!

Aftern I adopted my mini schnauzer, she just wouldn't listen to me. I was so frustrated one day while I was at the vet's. The vet inquired as to my dismay. I espounded on the fact that Gracie just would not listen. He asked me what language I was speaking to her??? Well, English of course. Between laughs, he asked me why I thought she understood English...they don't come out understanding English. Since the schnauzers are German dogs, I asked him if I should be speaking to her then in German? and we both got a good laugh out of that!!!

Looks like Hurricane Ida is paying you a visit up there! It missed us here in southeast Texas but getting you up there on the East Coast! Hope it doesn't rain too much and cause problems for y'all!
Au revoire! Jeanne

So now we have dog dog tiger. Or is it chien chien tigre? Whatever it is. George understands completely. He's a genius.

I talk to our dogs a great deal, but it's okay because Hubby talks to them too. They are our toys.

My last pup...a golden retriver...was crazy about sticks...she could wear anyone down...she knew that we would not throw sticks in the house so if she was staring at us indoors we knew she had placed an Indoor Stick someplace on us...it would be the size of a splinter and almost impossible to see...but she would still be wxpecting us to throw it...

Loved this post...I think we are all a bit daft where our pets are concerned.

George is so cute. Love that face. I think our pets understand what we say to them no matter what real or fake language we use. They are smarter than we know sometimes. Jeanne

Too Cute! Our lab brings us tiny scraps of paper as we also do not throw big things in the house.

Its always lovely to get a tiny chewed up slimy piece of paper on your lap.

Cute post! You are such a unique lady! And I just LOVE it when you feature George in your blog :) Happy Friday!

sounds like your hubby is getting some mileage out of the dog toys, too! C

You can tell by the look in his eyes, that George loves French. Toys only lasted about 30 minutes with Ralph. He ate them.

George is a saint to put up with you weirdos. ;)

It okay to speak any language you want, George understands them all. He is a Border Collie.

THe French lessons are good, he'll be a bilingual dog. So when he plays with dog dog he can lick him with his tongue tongue.

(p.s. The storm has taken prisoners which appear to be my only two functioning brain cells.)

It's great that you talk to George. I can't speak French, but I'm just as bad with the baby talk.

Your George is so awesome. You are not alone not by a long shot in talking to your dog. I whisper in my girls ear. I tell her she's my Best Girl and how sweet she is.

Well, now I understand everything!!! Your bi-lingual pup is so cute!

I used to call my my sweet little cabbage head in French...why not.

Gus and Rose both play fetch .. at least the ''throw it so I can run after it but do not expect me to bring it back I am a cat.''

AND Gus speaks Japanese.. our friend Bill like to speak Japanese with Gus .. Bill is not Japanese and his Japanese is a lot like your French .. no one better ever tell Gus!

that george is one smart and handsome dog!
<><

You are a hoot! George is one lucky guy. And who needs proper furniture? It is so stuffy ;0)

Your writing is so fun to read. George is about my favorite dog. He and ewix's Buster are my virtual canines. Having a real dog would probably send our big cat into a stress realted depression. Keep on posting.

I used to have proper furniture. Then, I adopted pets and had a baby. So much for that;)

Thank you for my George fix. I needed that. Soooooooo cute.
~~Love,hugs and Good Thoughts~~

i talk silly to all the animals too - i wish i could speak french to them.

George is a gorgeous dog. Ya, I used to have proper furniture, too. Oh well, c iest la vie...or some such, LOL.

I too talk to my puppies like that! My Sheltie Mix is Shelby, I call her Miss Shelby, Shelbygirl, Shelbdog and baby girl! Our Austrilian Red Heeler is named Bugsy and I call him, Mr. Bugsydog, Bubbe, Bugsyboy and they have thier toys, quacky duck, squeaky mouse ect.. you get the idea! It must be a illness! Oh Well, glad i have it! and glad I have them!

I speak to one of my cats in French - I wonder if there's a name for our illness?

Hahahaha, proper furniture....what is that exactly??? Do you have carpets? I use too, then I had dogs..now I have no carpets...just furry dogs lying everywhere...ahhh, what we do for the love of a four legged fur ball (or two, or three, or six)
Our dogs understand Norwegian and English..dogs can be multilingual..especially the really smart ones like George and Jenny...scary that dogs can be as smart as George and Jenny...I prefer the stupid dogs...a dog should never be smarter then it's owner..it's just not right...hahahahaha...
Have a great Saturday!!

OMG, that is so cute! I can see that you are having great fun with your new lens and the Florabella actions. Love the photos!!!

And we speak multiple languages to our cat. It all started with the custom of saying "Bye-bye, kitty" when we went to bed. From there it blossomed to "Au revoir, chat", "Adios, gato" and "Bonne nuit, Boo-boo".

We are currently under psychiatric care.

Darn! I was looking forward to that test. I used to have nice furniture too. Now I just have old furniture.

Adorable! Your French could be worse, but it couldn't be more fun!

Love the title of this post Kate! Dogs really are "more fun than a barrel of monkeys" :-) and I love that you speak to George in French :-) I always spoke to my 125lb Lab Benny in "baby talk" ♥

I love that you and George have your own language! I think that's part of the joy of pets. I don't know what our pets think sometime when we talk to them. I know Fiona loves the word "Acapulco".
And my furniture has seen better days too... and the butts of three Chihuahuas!
Great pictures!

oh my.. we have just had our 1st dog together .. now 5 months, and I now so totally understand this post, which I would not have a few months back.

Not many toys for our sweetie - but right now "foxie" and "monkey" are good.

And the silly song I sing her - I change the words every day, and she looks at me like I'm mad, but she doesn't run *lol*

I must try the french.. hmmm, as she is responding to some of my mos inane comments in English.. like "hot" to stay out of the kitchen when I'm cooking, or "enough" when I am giving her food from prepping dinner.