I was surprised at the number of people who expressed an interest in this historic site, based on yesterday’s comments. I’m happy to share it with you, so let’s continue our walk through Historic Hopewell Furnace, located just outside of Elverson, Pennsylvania.

As you remember from yesterday’s post, we’d just come out of the woods, and are traveling on the Horseshoe Trail which takes us directly through the village. Here’s the view approaching the buildings from the trail. Behind us are the tenant buildings. 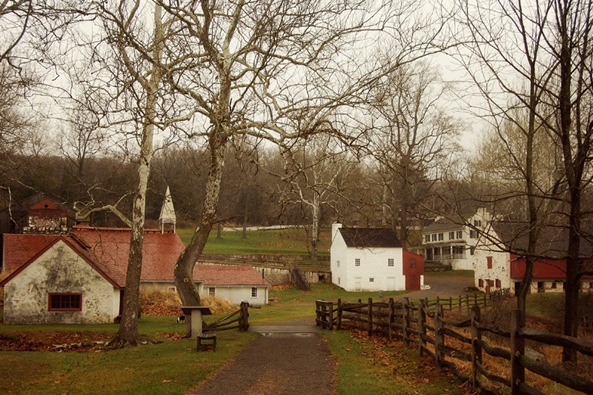 The mist continues to swirl as we walk up the road. You can see the bell tower on the top of the cast house on the left. First, however, we come to the blacksmith shop. 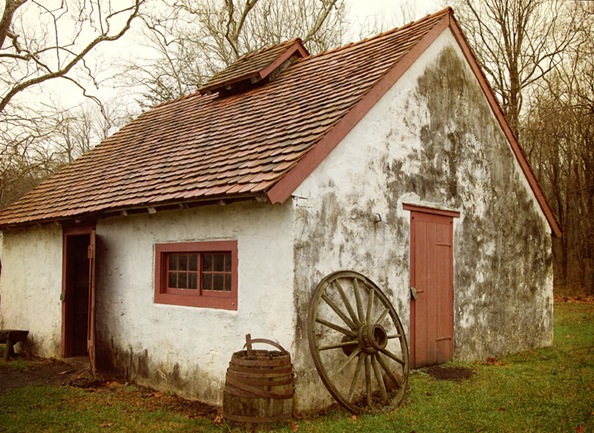 The blacksmith shop provided hardware and horseshoes and was also an informal gathering place for the men who labored here at Hopewell. 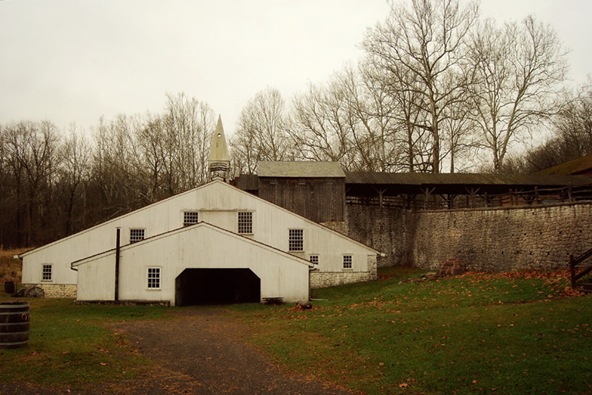 The cast house awaits us and it looks really dark in there. There aren’t any lights, but the windows provide enough and I’ve set my camera’s ISO to 1000 to help matters out. 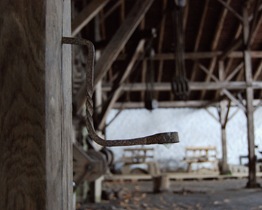 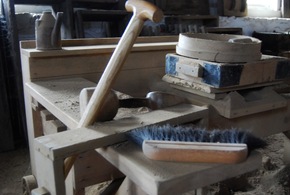 Clockwise from top left: I saw this hook and figured it was made in the blacksmith shop. Hopewell Furnace produced cast iron stove plates and many of them are on display here. Some of the implements used in “flask casking” included wooden frames and sand as well as the items shown here. 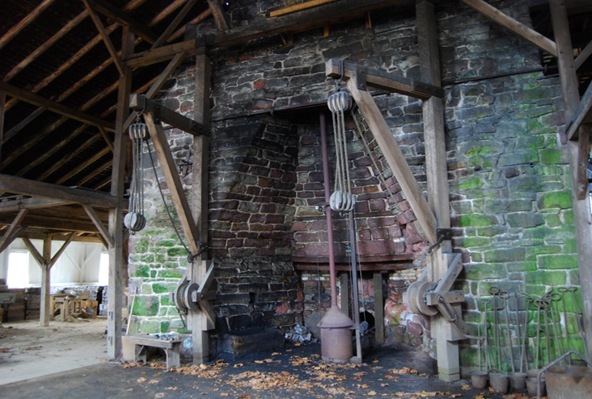 The furnace inside the cast house.

The founder was boss, technician, and trouble-shooter. He directed the ceaseless round of activity at Hopewell furnace. Raw materials – iron ore, limestone, and charcoal – were supplied by miners, woodcutters, and colliers and transported by teamsters. Fillers carted materials from the charcoal house area to the bridge house and dumped them at the tunnel head. Guttermen and moulders stood ready below to skim off the slag and cart the molten iron when it was tapped by the founder. 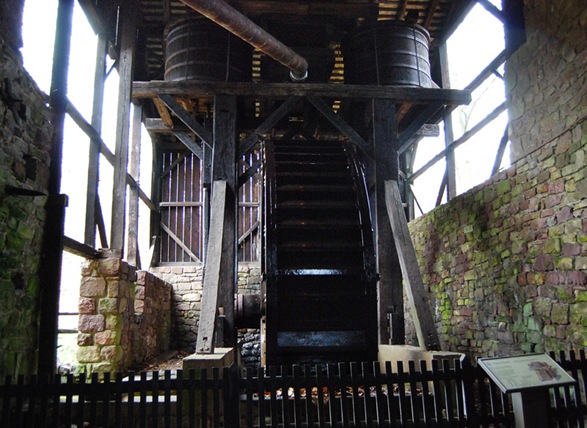 The water wheel has always fascinated me. This is the first time since we’ve been coming here that we’ve actually seen it at work.

American forests were so vast – and bringing in coal so expensive before railroads were built – that early iron plantations like Hopewell made their own fuel. They slowly burned carefully built piles of wood to make charcoal, an almost purely carbon fuel that burns with intense heat. The great demand for charcoal meant that early furnaces were sited on woodlands. One other ingredient was needed: air. It was directed into the hearth under pressure by the water-powered blast machinery, raising the fire in the furnace to smelting temperature. Let’s head outside now. I think I need some air after all this knowledge. How about we head on over to the barn now? We'll just follow these two guys. 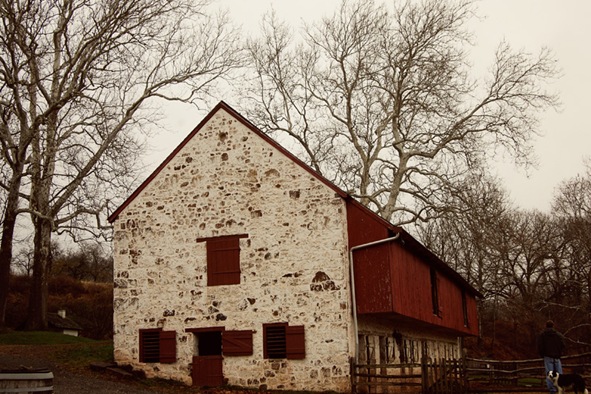 At one time, this barn sheltered 36 draft horses and held a year’s worth of food. Hopewell was both a rural Pennsylvania community and an iron plantation, turning out products for a growing nation and has been beautifully preserved by the National Park Service.

Tomorrow, we’ll check out things up near the iron master’s home. I mean, if you’re still walking with me. You are, aren’t you? We can sit and rest for awhile if you need to!

Until tomorrow then, my friends . . .

I'm still walking and don't even need a water break tonight. YOur husband is walking too fast through this part, though. Tell him us first timers need to slow down a bit to absorb everyhing.

The blacksmith shop and the barn for the horses are my favorites so
far. Gorgeous photos - very informative too.

I love these vintage photos and I love your blog.

Wow...such wonderful photos. This looks like such a great place to visit.

Wonderful tour, feel like I made the trip! Thanks for sharing your fabulous photos!

What a beautiful walk through! Thank you!

amazing!!!!!! so glad you shared this special place. your photos are wonderful.

I can't believe this lovely place is just open to anyone who wants to walk through. How neat is that!? I live in California, though, so I am used to everything being locked up tight so that the owners of the property won't get sued from some fool messing around and getting hurt. Sad but true.

Thank you for sharing your journey. Many of us will never personally set foot on this soil, but through your eyes we can say that we've seen it.

This is so cool...I love wandering around old sites like this. And your photos are marvelous!

what a great place to explore - great shots.

Thanks for this nostalgic trip to my childhood stamping grounds.

Have you ever been to FONTHILL in Doylestown? Home of the inventor of Moravian tiles, Dr. Mercer, and an early poured cement home. You'd love it (and so would we :)

So cool, I love the cast house. The buildings are wonderful and look at all the moss on the stones. I am loving this tour and the great photos. More please.
Jeanne

Love the way you can imagine what it was like when this was a actual working place, everything is so nicely kept...if it hadn't been for your husband walking by in jeans and a jacket I'd have probably thought we were back in the 1700's!! ;-)) Can't wait to continue the walk tomorrow..

No resting...lets keep walking. I will look forward to tomorrows post as I will need a good "walk" after jury duty!

Wonderful. I love the stroll. Thank you.

What an enchanted spot!

a truly amazing place for a photo lover !! thanks for sharing!!

Love it. Such a great place. Great photos.

Yea..for beautiful stove plates/backs or whatever they are called..besides 'works of art'..you did a grand job of taking us on a field trip. It was so interesting. Oh baby, imagine how hot that place was in the summer. Look forward to more trips ;)! Keep'em coming.

Love the contrast of the moss on the bricks .. and how cold it looks ... and how George is looking back at you in the last shot. CBW is right husband needs to walk slower, George was clearly worried (I can read dog body language, I bet you didnt know that or that I speak 'Husband')you wouldnt catch up. xo

Hey your WV is calling me a nellyman!

What an enjoyable post! My family originated it's American roots in Pennsylvania (Hummelstown) prior to our American Revolution. I have only been there once, but your post makes me want to return. By the way, one of my ancestors was a blacksmith and I have his account book which begins in the early 1700's (written in German) and then transfers into English. So very interesting, history.

I love how the whole little village is so well coordinated with its white paint and red trim. Thanks for taking us on this little walk thru history. Are there guides working there or someone taking care of the place? Can you get there by car, or do you have to hike in?.. just wondering.

Sandy aka Doris the Great said...

WOW! What a great place. I felt like I was walking through a medieval English village.

I've been wanting to go and see this for a while now. We have iron furnaces here that I've gone to visit, but I would love to see the village with so many buildings still standing. Maybe on one of our road trips this winter.

I can't wait to see tomorrows pictures. I wish I lived close by so I could check it out. Very cool.