Sunset on the hill

I went outside late this afternoon with my husband. “The sun is setting,” he said, “so bring the camera”.

He then proceeded to tell me what pictures to take with the camera. 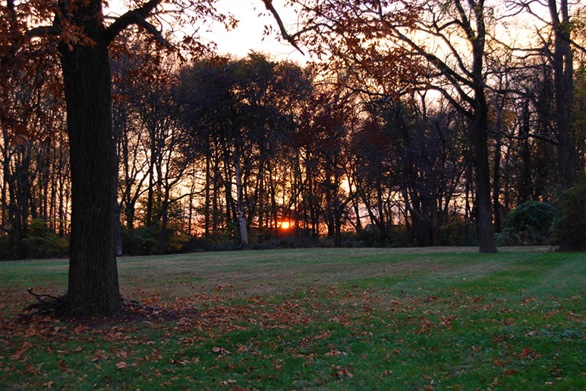 To appease him, I shot whatever he showed me. It’s just digital and I can erase what I want. At one point, he told me to come over to where he was standing. He had George sitting in a certain spot and he wanted pictures of him with the sunset in the background.

“No,” he told me, “you’re not doing it right. Get down on your knee like this. Look at the sunset behind George.” 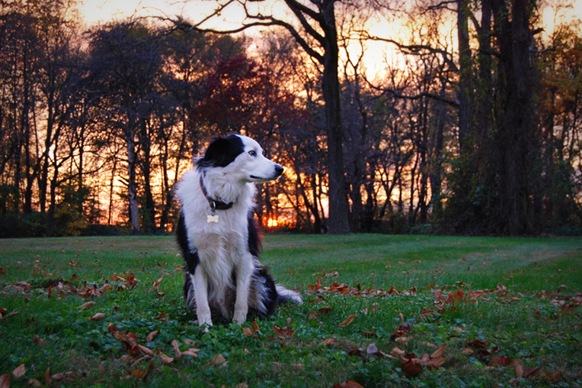 It was then that I handed him the camera and told him that he could do it himself, for heavens sake. He took several photos and the handed the camera back.

I took the one above. This is the shot my husband was going for, I think. 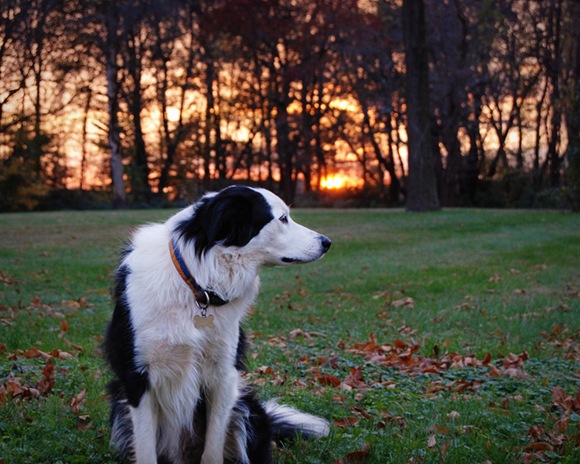 And then I took this one.

I love how this dog of ours just poses for me sometimes.

Suddenly I heard my husband. “Come here and take the sunset in the windows.” 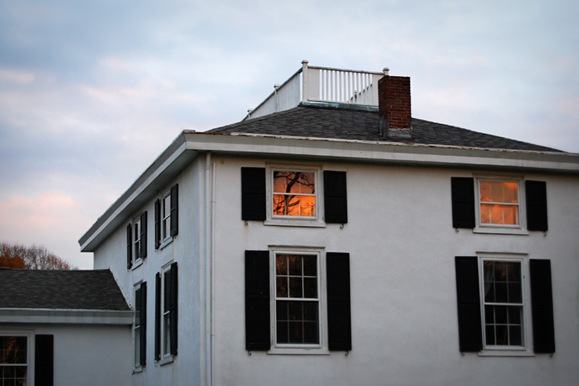 And that’s about as exciting as it gets around here, folks.

A dog that poses and orange windows.

I can hardly stand it.

Do you know how many people envy just that? The peaceful image of a beautiful country side, with a loyal dog and orange windows.

How wonderful. So peaceful.

I was just taking sunset pix tonight out my upstairs window. And that's about how exciting it gets here, too.

Your images (and your husband's too) are beautiiful. I love the reflection of the sunset in the windows!

Your house runs a close second to mine in the area of 'excitement'! LOL Isn't getting older together just grand? NO? YES? LOL

P.S. Will be in Linthicum and Columbia, MD this week. Hope to get up to the Inner Harbor too for some crab.

Kate, you are HYSTERICAL!!!!

I agree with Gail only I would add a hubby that likes to do things with you and George. Is this our George fix for this week.(LOL)
~~Love and Hugs~~

You've got to admit.. he's got a good eye for this. :) Lovely shots all around.

Kate your patience is, at times, boundless, but the sunset pics and the ones with George are special and to have a husband in your life that notices things like the orange in the windows... special.

Sarcasm is in ladylike.

I love the windows on fire. :)

Now I always start with A, but you can do it anyway you want.
Beatiful pictures!!

I love that your hubby "gets" it when it comes to autumn sunsets. I would be the kind to point out the sunset in the window, LOL!

There's much to be said for the simple pleasures. Your pictures made an ordinary day anything but.

Those windows took my breath away. As does George. Always.

Ah, but that IS exciting, and now your love of what is beautiful has rubbed off on your husband - that is very rare. Most husbands would say, "Oh, nice picture you took," as they're staring at the TV screen and wouldn't take the time to help you find another good one (photo not husband).

George must --and I do mean must--come to the next Blog Fest. Danger the dog next door would be in hog heaven, or dog heaven as the case may be.

Beautiful sunset and gorgeous shot of the eyes of the house reflecting the flame from within.

If my ELPH ever takes a photo of scenery I think I'll faint! Weird pieces of electronics? Absolutely! Sunsets? No way! LOL!
Beautiful as usual.

Well you know what I think about your posing dog...Everyone adores George but that shot of the sunset in the windows....now that is a contest winning photo...very very cool...husband has a great eye.

Dogs and sunsets do it for me!

Cracking me up! And awesome about the chemo being done - maybe forever,letusallpray. Thanks for the mention about the Apple Cheese Crisp too - so glad you are still enjoying it!

Apple crisp sounds good and the photos are great! How do you get George to sit like that for a photo shoot? If I got down on one knee for a pic, our Newman would be slobbering all over me, thinking it's time to play! ... love the reflection in the windows, too.

The picture of the house looks like the upstairs is on fire...that would have been great Halloween night with someone screaming! and the headless horseman riding around the property!!!!

Could you please bottle all that *excitement* so the rest of us could purchase it via mail order?

Those windows are wicked cool (and so is George). LOL...about hubby telling you what to shot. I bet you had an idea about where he could stick that camera... Ahhhh...marriage is bliss sometimes. But alas, all the photos are amazing!

George seems to be the sweetest dog and I would love to just hug him. Actually for all the smiles you give me everyday with your wonderful photos and great thoughts I could give you a hug as well. Love the sunset! Jeanne

Everytime I think how boring and uninteresting it must be to show people around my home, I think about the people who live in apartment buildings in busy cities who might not get to see a tree let alone an entire forest, or their sunset is blocked by high rise buildings..not to mention people who live hectic lives in general find peace and calmness in photos such as the gorgeous ones you and your husband take..you shouldn't underestimate how powerful the "boring life" can be for some people my friend...

Beautiful, beautiful. Thank you for some peace with which to start the day. C.

Lovely images Kate -so peaceful and George posing:) Be thankful your husband did not bring a goat into the house - as mine did this evening..... Not so much excitement - just a lot of yelling from me:)

you have a backseat photographer!

All of them are so neat.

Oh I am sooo laughing. ToonMan dictates edits to me when I am showing him the pix I snapped. ToonMan's 'excuse' is he is a video editor so dictating what to cut come naturally to him ... listening, obeying does not come naturally to me, so often I suggest he cease speaking and take a camera and go get what he wants to see.

:0) You all need two cameras to keep you both happy! George is such a good boy.

You are too funny! And that dog of yours certainly could have a modeling career! Just sayin'...

so much more though...thank you for your sharing of them!

LOL Kate same here. Except it is Miss H and I who are competing for the camera :)

I'd say that no one can take a better picture that what you have in your mind except the person with the thought. Does that sound confusing? Beautiful!!!

Love the window shot, looks like fire, which would be bad but the shot is cool.

Ohhwww sunsets are the best, and totaly when a dogfriend is nearby. Love the warm glow and colors.

I love it! George is so beautiful. And so is your home. How I just love visiting your site, Kate. It never fails to relax me. Thanks!!!!

Kate, I could see this scene of you, your husband, and George. Understanding a little of your story...the three of you that is...I feel I have seen a film clip of tenderness and understanding and yes...sometimes the little daily barriers in relationships...the ones we can surmount. This was a really superior post! Great photos...by all THREE of you.

Those windows! WOW! Breathtaking...and you are a very patient woman:)