I am extremely grateful for being able to live where I do. The old manor house on the hill sits on 20 partially wooded acres and its beauty gets driven home even more when people come to visit.

It was so wonderful to be able to get away, if only for a night and a day. Come Monday, I had no set plans for the day other than trying to get some more bluebird photos after noticing a pair who were scouting out one of the nesting boxes. 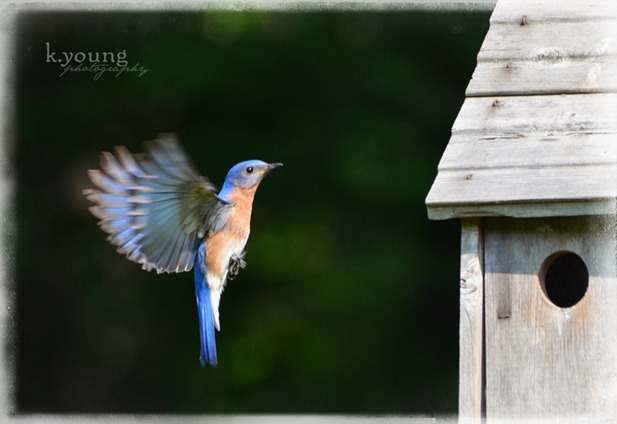 After about two hours, I managed to get this shot. I had the shutter speed set to 6400 which is how I caught the wings.

I thought it was worth the wait. 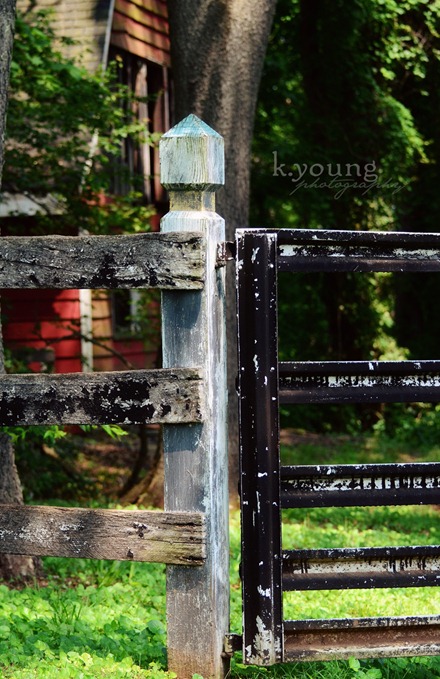 To appease my boredom, I took images from my seat in the yard. I think the barn in the woods in this photo looks dark and mysterious. 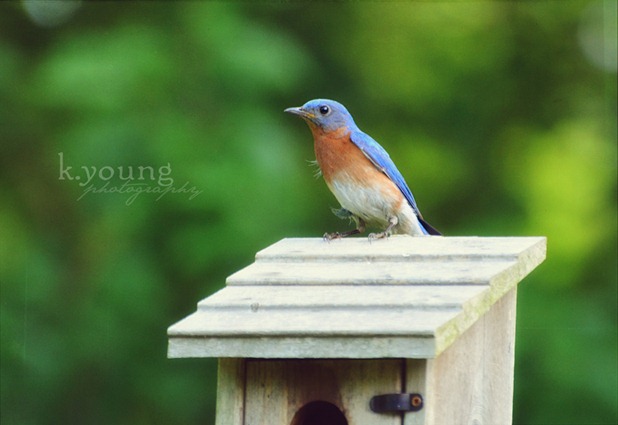 Another favorite shot. Interesting little tufts sticking out of the feathers, too. 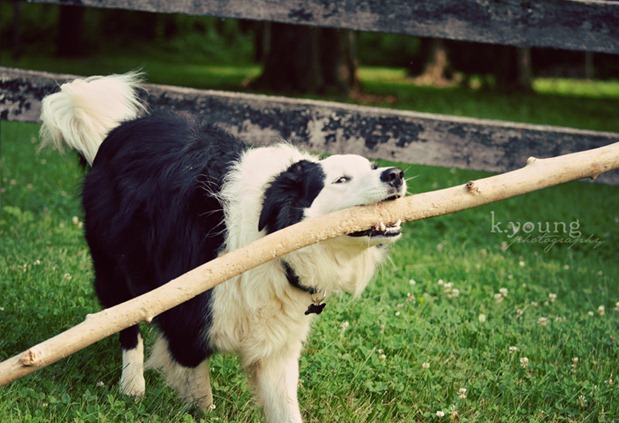 While I’m waiting, George is often with me. It’s not good to be all moving around and playing fetch when you’re waiting for the elusive bluebirds to show up, but he’s such a sweet dog that sometimes it’s just too hard to resist.

I did resist, however, from tossing this huge branch. 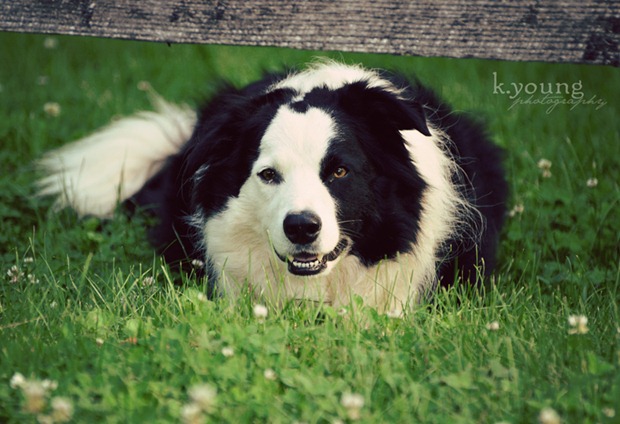 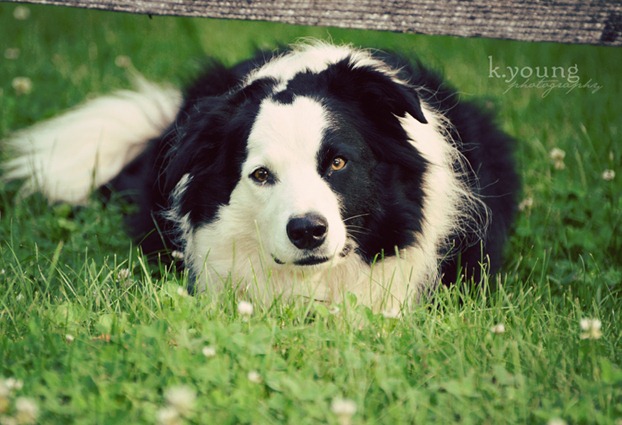 I tell him no, and this is the look I got. 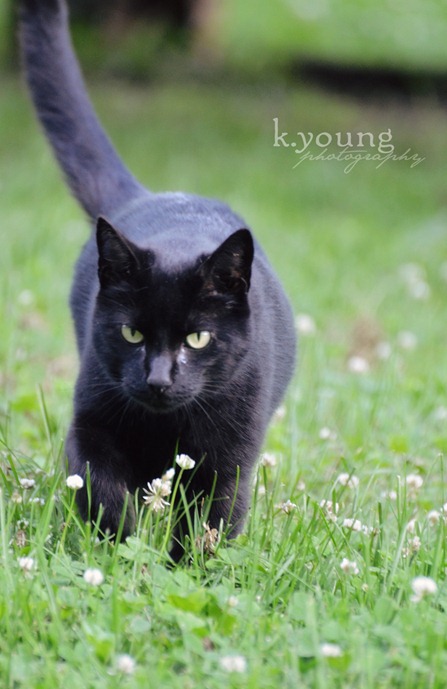 Another boredom shot but one I like. Miss Blackie daintily walks through the clover. 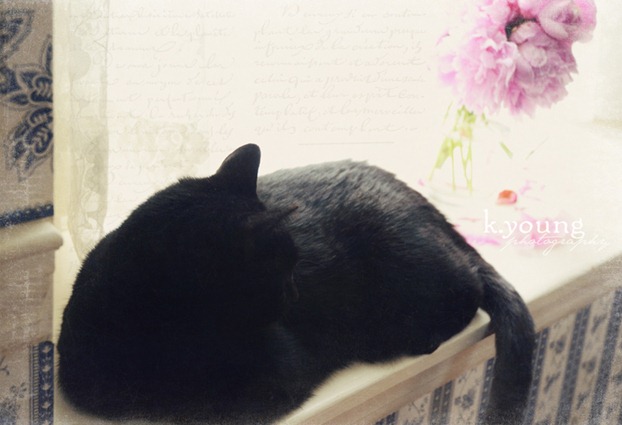 And later as she suns in the dining room window. 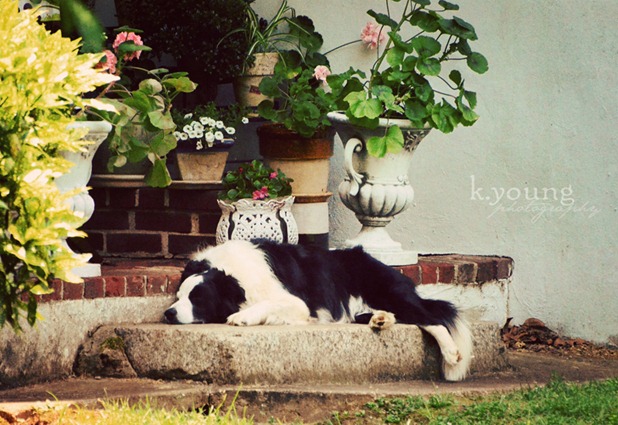 This is why I have the disclaimer on the blog header.

{Don’t get too excited}. 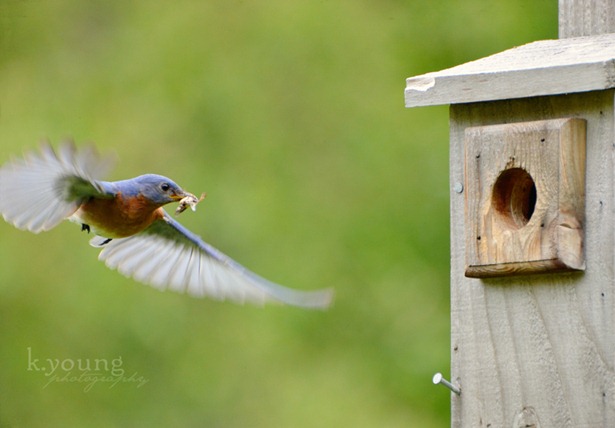 Taken a month ago ~ 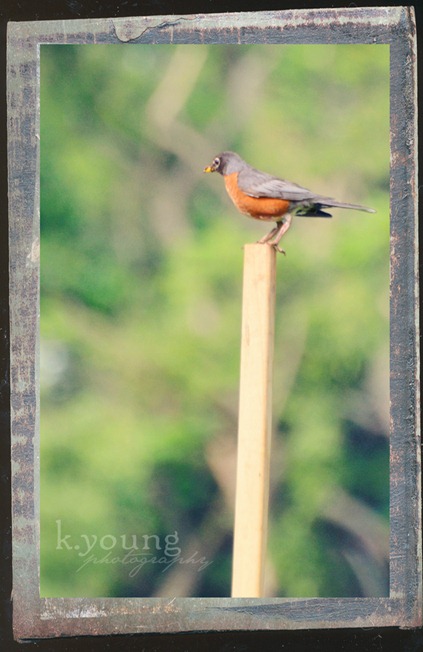 A robin with a les brumes texture.

And another favorite shot, below. 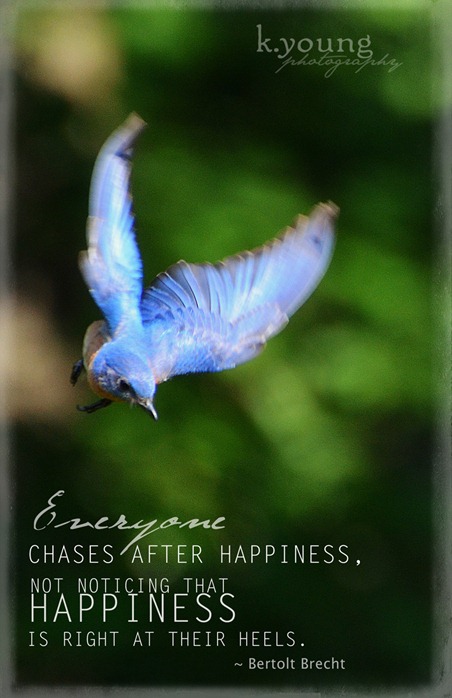 "People are just as happy as they make up their minds to be."

And now, because I’m crushing on new summer tunes, one from Alabama Shakes (although you may have already heard this one). Might not be able to play on Blogger, so click to listen on YouTube, if you wish.

It may be several days before another post due to the end of the school year crunch, which is partly why I included so many images here. Hope it made you smile, even for just a little bit.

BEAUTIFUL pictures!!! Well worth the wait!

Your posts always make me smile. I love those looks by George. He really is such a sweet pup. And your bluebird pics ... well just gorgeous! I'm always glad to see Ms. Blackie. She looks just like a kitty of mine years ago ...
Great quotes and absolutely true!

Kate, the pics are just gorgeous...I just stared at the first one for a while...and then I got jealous bc my camera's shutter speed will only go to 1600 :(
Then you brought on George and Mrs. Blackie...and that made me glad I decided today not to teach 2extra summer school classes in July...I want to be at home...where I belong...with my camera, my animals, and my family (not necessarily in that order, of course ;)

Yes these photos did make me smile as did the post because it sounds just like what I do and what my Miggy does as well always with me and expecting me to play as I am trying to take bird photos lol ! Like you I wouldnt have it any other way ! Your posts and photos are far from yawnsville they are FANTASTIC ! Have a great evening !

Kate,
Your photos are amazing. The colors are so sharp. I love looking at them.
And of course George.... sweet George!!

The wings on those birds are simply exquisite.

oh Kate! I'm speechless.... those are awesome; that last one with the quote is quite inspiring!

The bluebird wing shot is amazing. So glad you waited for that pic.

I wish I could see the beauty in ordinary things the way you do:) The Manor House is so peaceful.

OMG to the first shot. Loved 'em all- but that one made me say "whoa" out loud. XXOO

All beautiful photos but that first bluebird is stunning!

you are such a pleasant friend to 'hang' with. George makes me SMILE, your birds make me GASP!

Bluebirds are my favorite...and so hard to capture. Your images are wonderful!....

LOVE George on the stone step.

Oh yes, the photo was worth the wait!

oh that George .. what a sad look .. go get your new toy .. and how nice of Ms Blackie to make an appearance .. OMG OMG OMG those bluebird shots are sensational, yes well worth the wait xo

I couldn't sleep one night last week or the week before!!?? and saw this group on the Letterman show..."interesting" bunch of people...like the song tho'...your photos are fabulous, as always...always.

and george and that extra heavy duty stick just made me laugh out loud !!

Luv all the pictures, you can bore me all you want.

I love bluebirds- they make me think of my grandmother. I like to think she's sending me a sign when I see one. A couple of months ago I actually had 7 bluebirds land on the fence as I walked past. I don't know if it was a sign from beyond the grave or that I'm secretly a Disney Princess. Either way it was cool.

They did make me smile. Your birdy photos are always a favorite. What a lovely life you have.
:}

Sending bloggy love for the snapshots. Well worth the wait I would say.

Boredom?! Are you crazy? That's my idea of bliss, right there.

George looks just like Willow. The girl exhausts me with her ceaseless desire for play. Fortunately, she prefers a small tennis size ball over trees. So far.

Kate - that bluebird shot with the quote is wonderful. That needs to be a Pinterest poster for sure... can you? Do you?
♥
BB

Now, Kate, I am with George!! Why didn't you throw that little stick for him? LOL Silly doggie!!

Love your photos, especially the first one.

This post makes me want to do a cartwheel!
These are absolutely stunning!
Your bluebirds in flight just take a my breath away!
And George....oh George ..... what a sweetie!

Great photos. Great! Always a balm for my soul. Glad to have some time this morning to come visit and drink it all in.

Have a good end-of-week and great weekend.

Oh Kate your bluebird shots have me in awe! And the shots of George... so handsome and full of expression. Love all of them and yes it's hard not to smile seeing all of these. xo ~Lili

Oh how I wish we had bluebirds here in the UK Kate - beautiful shots.

It was worth every minute that you spent there, and look at the photos you captured.

Love George, of course, but Miss Blackie captures my heart...I see much of Boo in her.

your capture of the wings is stunning!

oh my. how could anyone ever be bored with your gorgeous photos! i love the bluebird shots, just fabulous... and george just cracks me up!

I love the bird pics. You did an excellent job at catching the wings in flight. Well worth the wait!

Oh my! Those "on the wing shots" are well worth your wait Glad I don't have to wait that long, tho. Don't have your patience!! How do you even get a 6400 shutter speed!!

Hi those bluebird shots are wonderful. Absolutely worth the wait.

Hi Kate! Your bluebird photos made my jaw drop. Wow, definitely worth the wait – those wings are amazing. (We have lots of birds here with not much waiting required but I am useless at capturing them.)

George is a cutie, and the bluebirds are gorgeous. Great captures, especially the last shot. Have a great day!