Ok. Raise your hands. How many came here after seeing that post title come up in your blog list? C’mon . . . let’s be honest now, folks!

Well, truth be told, I took the post title words directly from a bottle of liquor that I have here. 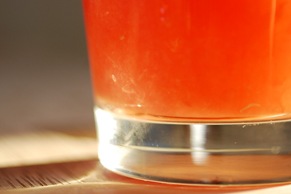 I enjoy imbibing occasionally, I must admit. I don’t do it all that often and rarely ever have a drink on a weeknight but on the weekend, I do like to have a drink or three. Or six if we’re talking two nights, but who’s counting? For years now, mainly in the wintertime, I enjoy a drink that, according to the manufacturer's marketing hype, is “a taste born of hoary nights, when lonely men struggled to keep their fires lit and cabins warm”. 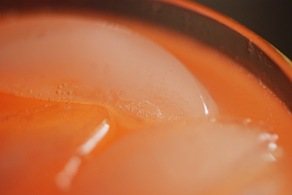 Of course, that’s not why I bought it in the first place, although that does sound intriguing. 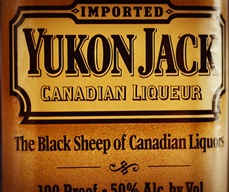 The “Black Sheep of Canadian liquors”, Yukon Jack is a 100 proof (USA) or 80 proof (Canada) honey and whiskey based liqueur. I hadn’t known until I just looked it up on Wikipedia that it’s also known for its macho image.

Featured on the label is an artist's rendition of Jack McQuesten, famous pioneer of the Yukon, for whom the drink is named. McQuesten is trudging through the snow and wilderness all bundled up in his parka.  I guess he looks pretty macho. 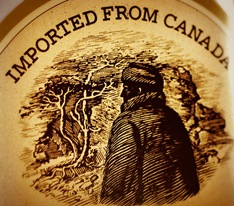 Well, Yukon Jack is a honey-based liqueur, which is strong, sweet and a bit syrupy. That seems to be at odds with the macho image, if you ask me.

I have mine with fresh squeezed grapefruit juice and if you use ruby red, the drink is actually pink.

On another note, my husband is excited that Jewell is going to be a contestant this season on Dancing With the Stars, which begins tonight. Our DirecTV receiver went kaput over the weekend so we have to watch the TV upstairs, which is different. And kind of nice. Now, my husband doesn’t call Dancing With the Stars by its proper name. He calls it The Survivor Dancing Show. American Idol is The Survivor Singing Show, and Survivor is what it is. He loves Survivor. And it’s easier for him to remember the names of the shows this way.

My husband used to have a huge crush on Jewell when she first hit the scene. I just thought of something. If he ever read this blog, he would kill me. So I’d better stop now. I mean, a post about me drinking and old crushes he had would just be way too much for him.

Until tomorrow, my good friends . . .

Oh, damn! I'd better get upstairs and console my husband.

I love his titles for the shows. :) And mmm .. the grapefruit addition sounds yummy!

What the hell is a hoary night? Guess I need to look that up.

Oh my goodness, I think your husband has better titles for those shows than the ones the "experts" in Hollywood came up with.

As soon as I started reading your post, I thought of being a child and when I had a cold, my mother would mix up honey, lemon and whiskey in equal amounts for my cough. You know, it worked better than most cough syrups. Do you think it's because it knocked me out?

that drink looks good and I see someone already told you Jewel was injured, there are 2 contestants out before it even started.

I like hoary men and Jewel also. I also love the idea of drinking Canadian Whiskey, with honey, and Grapefruit juice eh?

Here I live in Canada, and have never heard of this. Must send out the dogsled for some.

LOL feeling a little hoary myself these days. Must need another blanket...

We went later in the day and it wasn't too bad. I've been on weekends and early on weekdays and it was a madhouse.

I think a "class trip" is a great idea.

Jen, I am appalled that you do not know of this drink, being a Canadian. Oh, the shame.

Cathy, hoary has quite a few meanings but I think it's white here. Like a frosty night filled with snow. That's what I always thought it meant.

Ellen, the answer is yes. And the rest of you are very funny! And my husband isn't watching now because Jewell is hurt. Perhaps he's sulking. Oh God, he will kill me for sure now if he reads this.

So sorry to the Hubby that Jewel is not on. :(

Champagne is my liquor of choice... or a mudslide will do also... *hic

I KNEW it!! :) Cute as heck..and yes..it's a good thing you stopped. You know him better than Jewel! Thanks for stopping by and I am pleased you liked what I wrote. I posted twice today..and I probably shouldn't do that. Well..after all..I am learning here. :) Too much at once.
Mona

Lol on your husband's Jewel crush! (my husband likes her too! I don't understand...) Excellent post title by the way!

Aye, I 'member me own sweet mum giving me a twist of da Yukon Jack when I was but a wee one. 'Tis da honey wit-out da toast, she'd a be sayin' to me.

Jewel is very crush-worthy...too bad she is hurt. But he can root for her boyfriend(?)/husband(?).

Thanks for my giggle of the day. I could picture you scrambling to get the entry finished before you were found out!

LOL! My drink of choice when I was younger was Yukon & 7! And, not many bars carried it. One bar I used to go to actually started getting it just for me ;p Awww... Memories!

I do have to say the title shocked me at first when I came over. I thought "God Kate is way to stressed". LOL.

Heart of a Cowgirl said...

Oh yes, you are toast if your husband reads this! :)
I thought Ty Murray was gonna be on Dancing Survivor?

So sad, but Jewel is not goin' to be a dancer, she got hurt BUT her yummy husband is gonna be!

Pity about Jewel. I suspect lots of guys were pleased with her replacement, though. Hef's ex-Holly Madison...

Your post reminded me that my mom's favorite drink was Fresca and whiskey. She called it a "Frisky."

I saw Jewel live a few years ago before she went pop, and it was great; definitely crush worthy. I was disappointed when I heard she was out. (Yes, I am a closet dancing with the stars watcher.)

Holly Madison did very badly. She was stiff, was out of timing, and overall didn't look like a good replacement at all.

Hee hee...After reading your description of a hoary night...that is sure not what I thought it was! I better just leave it there!

If those lonely men would just shave then they wouldn't be so hoary!

What could be simpler than that? Hmm? Hmm?

I love this post! And yes, you're right, the description of Yukon Jack does NOT sound macho, but after imbibing , who cares? I think your husband's re-naming of the shows is really way more accurate and descriptive than the titles in the T.V. guides. They should hire him, and bet the viewing would increase just based on the titles alone. I am surprised to find my Hubby watches these shows too, whilst I am spinning wool and watching the so-called better shows.Just goes to show who knows best!(not me)

Gotta love a woman who drinks Yukon Jack!! I like your husband's names for all those shows. LOL. Too true.

I have to look up 'hoary' and see if it mean what I think it means (not a regular Aussie expression - at least not spelled this way!!)

Giggled at the Survivor variations... it was Survivor Rider at my place today!!
:-)
BB

A superb play on words, I'd say.

Love reading your words - you always put them together so well, Kate.

Oh ... my recent meet up with an EX will never get blogged because I didnt tell Husband when the EX first got in touch and now, it feels very soap opera-ish, not having told him then it would need more explanation than its worth .. truly.. I married the absolute right man ... oh well maybe it is getting blogged about but he'll never know.. ssssh

You just crack me up, you really do. lol

Totoally funny kate I think those are great names for those shows! :)
I think he's got something there.

I have to stick to wine, anything stronger puts me on the floor.

Don't know who Jewel is, but I can guess more or less what she looks like! Your secret blog is safe with us.

My kind of woman...writing a post about a Canadian whiskey! I'm a Canadian Hunter fan myself!

Oh...I'm sure Andrew was crushed to hear that Jewel was injured. But she was in the audience last night...maybe a small consolation.

omg you crack me up. You crack us all up!

Note: my father was one of those who worked on the very, very top of the beautiuful bridge you photograped. Without a net or any kind of safety gear.

I love driving over it and thinking of him and his complete lack of fear.

Kate, being Canadian I got a kick out of your tales of drinking the blacksheep of liqueurs. I especially liked the Imported from Canada image. ;)

But I plan to remedy this soon.

I have a partial bottle of that stuff. I didn't think it was worth much of anything but I was wrong. Look at this great blog post it inspired. :)

And my curiosity is more than piqued by Daryl's comment...

This sounds yummy to me...and it is a beautiful color...perfect way to keep away the cold...I have a bottle of Tamarack liqueur from Vermont which has maple syrup in it as a sweetener...mixed with apple cider...and heated...yum!

Thanks for sharing this link, but unfortunately it seems to be offline... Does anybody have a mirror or another source? Please answer to my post if you do!

Thanks for sharing the link, but unfortunately it seems to be offline... Does anybody have a mirror or another source? Please answer to my post if you do!

I found this post on a search for the little story on the bottle. My first encounter was in 1988 at a Lutheran Bible camp in SoCal. After the campers were all checked-in and bunked down on the the first night, the three participating pastors, who together were seasoned camp veterans, first recited the sentence, then broke out the bottle with a considerable amount of glee. I've not tasted it since, and don't think I care to.