Girls in their summer dresses

My problem is that I take a lot of pictures. I mean, a really large amount. Usually, I get rid of the throwaways quickly. But my problem lies with people asking me to e-mail them a copy. Oh, they’re polite about it. And I always say yes. I just don’t tell them when exactly they should expect it, and the truth is that it will be some time within the next year. Or two. 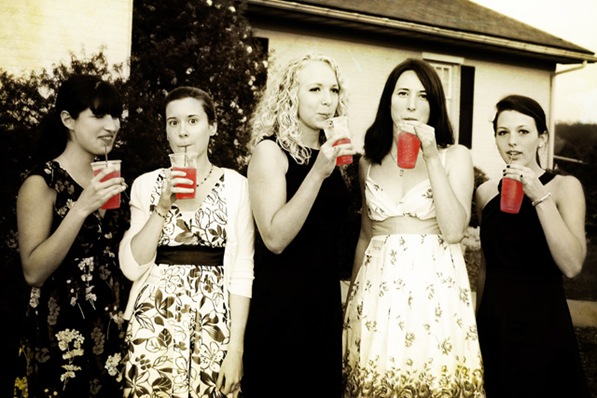 So when I was going through some picture files that I’d recently taken, I came across one that I liked and hadn’t done anything with yet. I’d taken this shot back in late April of this year at the Alumni Banquet for our school. I’d gone outside to make a phone call and saw five of the girls from the senior class standing there drinking pink drinks. I thought they looked adorable. I took only two photos and liked this one better, although the other was more crisp.

I tried several different actions until I settled on this one from Kevin Kubota. It’s one of my favorites of his and is called “Secret Formula”. Then I added a Joy St. Claire texture over the top and brushed away most of it, but not before I brought out the pink of those pretty drinks.

And do you want to know something funny? Not one of these girls asked me to e-mail them a copy. And because of that, I think I’ll mail them each one. I mean, if you think this photo is good enough. I like doing stuff like that.

Now if I could just get to all the picture files that really need to be done. Like graduation. And the album for my friend’s 50th birthday. Ah. Such is life.

i've started taking pictures in large numbers only recently, and already i am beginning to wonder how others manage theirs. i love this picture and what you've done to it. lovely!

Love what you did to this. I never do any actions other than what is offered in iPhoto. I hate reading directions more than anything else.
At this very moment, there are 6,872 photos in iPhoto. Too many, too many!!

Email away! Someday those girls will be thankful they have this wonderful photo.

What I like about the picture is the "pinky thing". It appears that everyone of them has their pinky finger extended. That is a woman thing, but, how ironic that every one of them is doint it.

I was waiting for someone to notice that pinky thing! I wondered why they were smirking and I think they planned it while they waited for me to get off the phone and get my camera out! And I didn't notice it until I was going through the pictures.

an adorable shot. I finally bought a very large drive and started cateloguing the shots in there. now if I could just do a database with dates and ex-ref key words. LOL yeah. right.

I know they will enjoy getting this.

If unprocessed, promised photographs were dollars, I'd be a freakin millionaire...

Love the effect of the pink drinks with the black and white and would love to know how you do that?

Di
The Blue Ridge Gal
(I have 10,874 pics in iPhoto and need to put half of them on an exterior hard drive for goodness sakes)

Ha! I would too, Donalyn!

Di, I did it in Photoshop. I learned it here:
http://thepioneerwoman.com/photography/2009/01/the-scarves/

What photoediting software do you use? I am currently in the market for new software and would really appreciate any advice you have to give.

Honestly, this has to be one of my favorites of all your photos (and I truly love sooo many of them). Superb, Country Girl! -Tammy

There is nothing better than receiving a surprise shot! And this one is superb. As usual!

This is wonderful editing. Love it.

It's so fun! They'll love it. It's meant to be framed, for sure!

I'm not usually a fan of selected color....but this is great! The pinkies/pink makes it really fun...I think you should definitely send it to them:)

I just got an external hard drive and I'm trying to delete a few pics before putting my pics on there....What to save?...all my trials and learning stuff from classes?...it is taking forever!

Great picture. I have a bunch of pictures clogging up my computer that I need to go through as well.

That is very fun. I can't help but chuckle at the intensity of eyes on the girl second from left.

This is a great photo...those girls are so adorable and I love what you did with it...Hope your weekend is going well...Stop by my blog i have a new post that I think you'll enjoy reading...

Oh, what a Fabulous image Kate! I don't "do" people pictures very well....I really need to work on that. I'm sure they would all LOVE to have this shot! Definitely one to treasure!