In an earlier post, I mentioned that I was going to do something fun on Monday. But at the risk of spoiling the surprise plan for a friend’s 50th birthday party, I couldn’t mention what I was so looking forward to. I mean, who knows who reads this blog.

I had so much fun!

My friend’s husband rented a 26-passenger party bus which loaded all of the guests on first and then proceeded to the pickup point for the birthday girl who was with her husband and the couple she thought she was having dinner alone with that night. 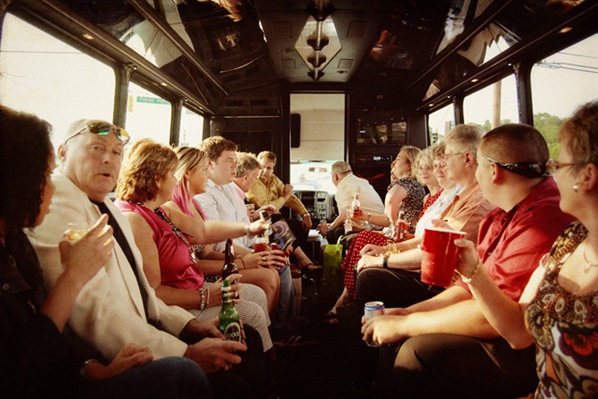 We were heading to Philadelphia, about an hour away, for dinner. And that bus was a blast! 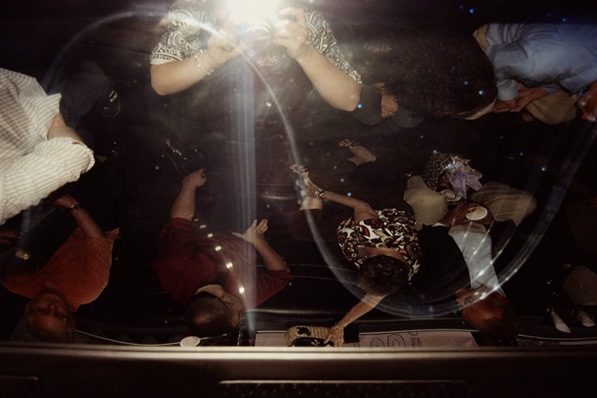 Unfortunately, with the bus moving and the light constantly switching, I turned on the flash and pretty much left it on all night. I don’t enjoy what flash does to a photograph but the light wasn’t the greatest. And I’m lazy sometimes. 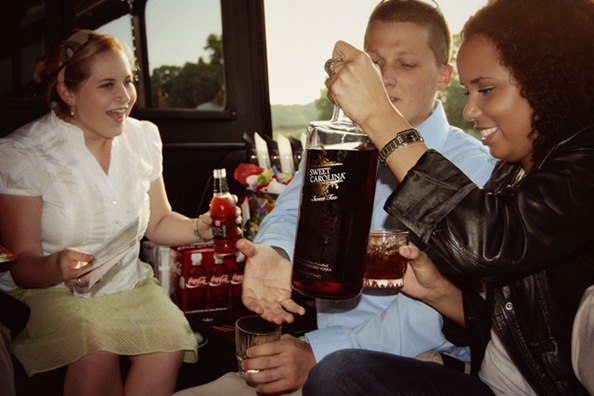 I also discovered a new drink just in time for summer.

This is Sweet Carolina, one of the new “sweet tea vodkas” to hit the market and it’s a fun summer beverage. 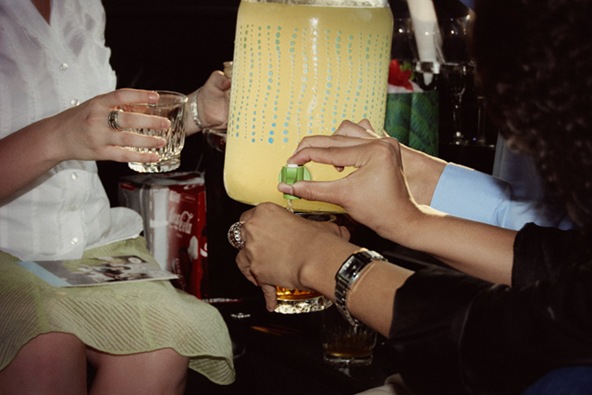 We had it on the rocks and paired with fresh lemonade. The combination was perfect. While music played and hors d’ouvres were passed around, friends and family enjoyed each other’s company while the guest of honor opened some of her presents.

She had no idea where we were going, nor did she seem to care. She’s a fun person and always up for adventure. 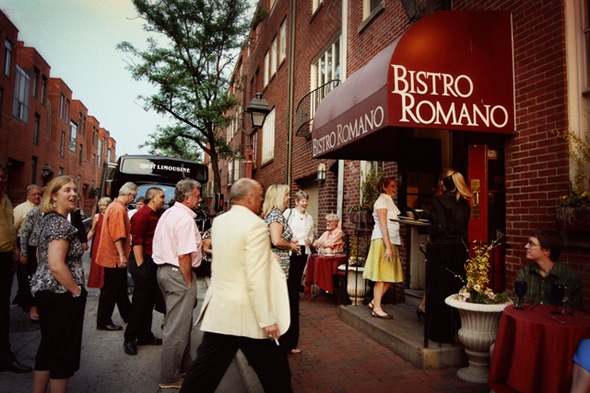 We caused quite a stir during our arrival at the restaurant. And the scent wafting out of these doors was heavenly.

We entered the long, narrow building made of brick and stone and the owner led us to our reserved section. Business was light, making it perfect. 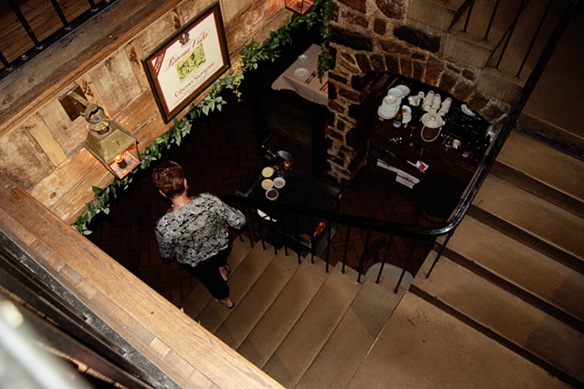 Down the stairs and to the right is where we’re headed. 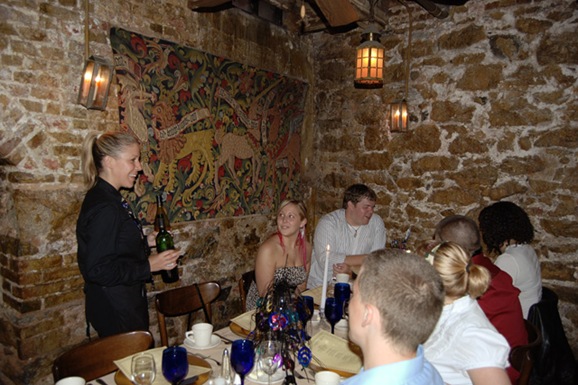 The flash brought out the stone walls, the fixtures and that gorgeous tapestry on the back wall. Where you see that little archway on the left lies a tiny secluded room with a table for two. I was intrigued and went to investigate. 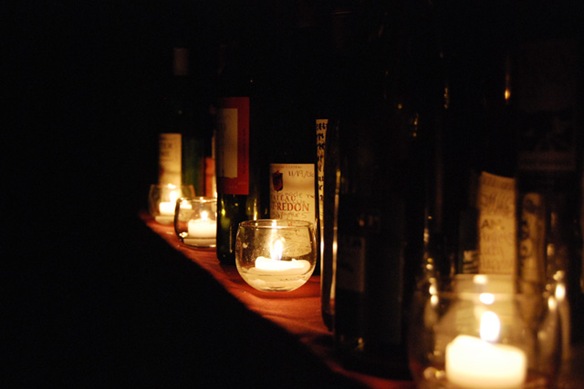 One entire wall was decorated with beautiful bottles of wine, now empty and bearing the dates they were used. Some of the labels were gorgeous, and candles shed a romantic glow. 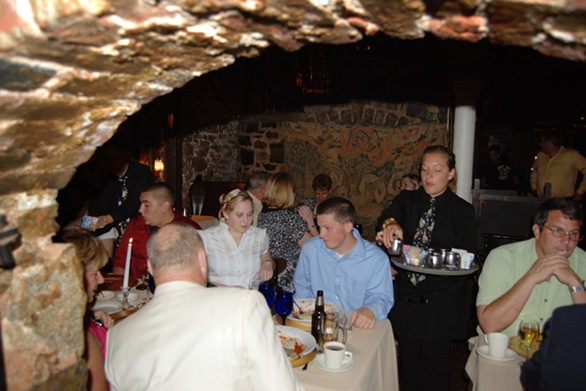 I took this standing at the archway, looking into the room where our tables were. We had a fantastic meal and afterwards, a cake was brought out with much fanfare, candles were blown out and company was enjoyed. If you’re ever in the Philadelphia area, I highly recommend this establishment.

When we left, full and happy, we entered the limo to find that it was equipped with neon lighting throughout the ceiling. It was groovy, man. We soon found ourselves driving through the streets of Philadelphia, singing to oldies on the local radio station, and gawking at the eclectic shops of South Street and the people who were out and about. 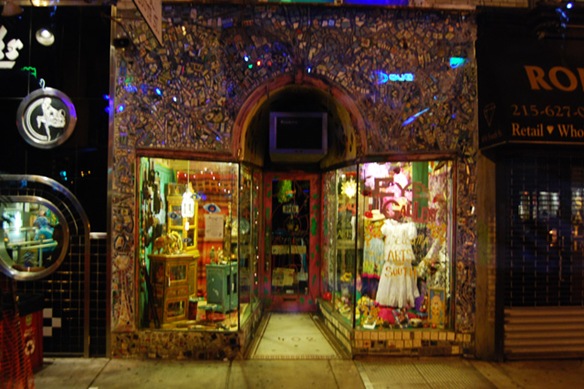 Because it was so dark, I had to set the camera in a way that left the lens open for a long time and with the bus moving, it made for some interesting finds on the memory card. 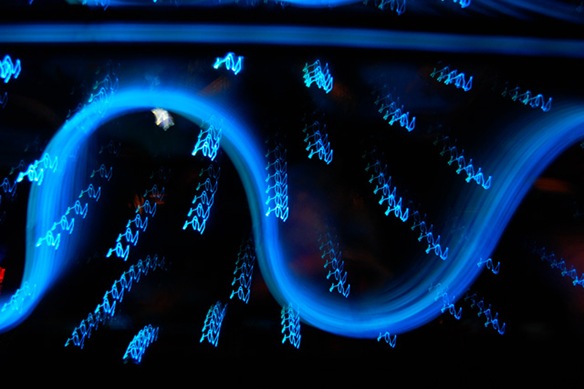 Here’s what some of the neon lights looked like. One of the streets was cobblestone and I think it’s while we were driving on that one that I shot the next picture. 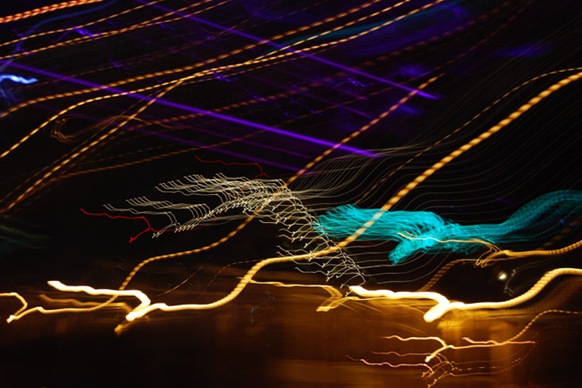 I started getting sort of artsy with the lights and the speeds of the camera. I think I’ll entitle this one Riders on the Storm.

It isn’t that often that I laugh this hard and have this much fun. 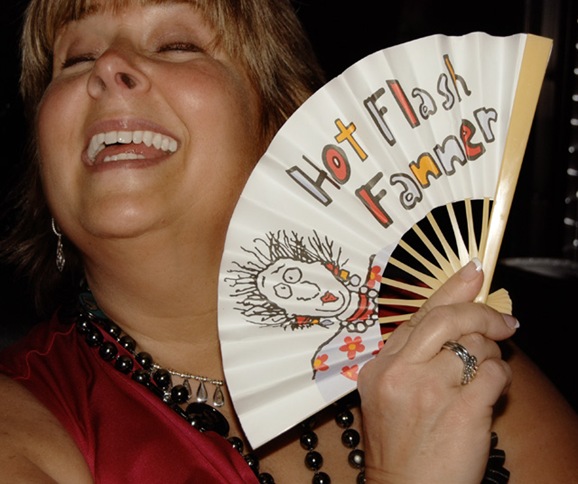 You know, I think of all the presents she received, this one may be the one she gets the most use out of her favorite.

Happy 50th Birthday to my friend, Kathy! May your hot flashes be few and your friends be many.

Oh, my gosh! This looked like so much fun. How nice that you have so many friends to share good times with.

My husband and I rented a party bus for twenty and took everyone to the Oakland A's game in a suite. It was seriously nuts. It's like we all went bezerk to be without our kids for 8 hours, LOL.

I think the restaurant was on Lombard Street, close to the water side. And yeah, we drove around sightseeing for a little bit and took in South Street. I think we saw a hooker. An old hooker. Damn.

what a fun night!!! and the place looks fantastic. beautiful shots

Now this is a way to celebrate a birthday! I'm going to have to have a talk with my hubby....

Fun indeed! What a great idea for her husband to come up with....I'm trying to decide what to do for my sister's upcoming 60th birthday....I need ideas!

What fun! And those neon shots are wonderful!

What a fun surprise party! My daughter lives in Philly. It's such a great city, one of my very faves.

What a fun night and all of your photos prove it so. Great idea, to rent that bus and go about the evening in the manner it was unfolded!!! Ah.

I know what you mean about the flash in photos, but these here look great as they are. It seemed to have warmed your setting nicely :).

Again...I SO enjoy visiting you.

Yum, sweet tea vodka! Woot! You have me at hello!

How much fun was that??? I am going to get me some of that vodka concoction. Just as soon as I drop this last 25 pounds;)

What a great idea to rent a bus! I'm sure it was so much fun. I love the light shots, very artsy!

awesome post...the pics great.
the restaurant reminds me of one i ate at in florence...also was down some stairs and looked a little dungeon like :)
liked your night lights shots too.

Awww! That looks like a lot of fun. Glad y'all had such a good time.

She sure doesnt look 50, bless her heart!

What fun and what a wonderful gift your photos will be..

LOVE Riders on a Storm .. or not

I think we need that tea vodka for our trip to VA ..

Oh what fun! I have never heard of a party bus. Gives you an idea of how exciting my life is... ;)

That shot from South St. looks familiar. My son used to live quite near there. Now he's in South Philly.

I know what you mean about using the flash, but your pics came out fine. Love the "artsy" ones. ;)

What what fun! I love that idea!! It looks like you all had a blast.

That looks like such a great time was had!!! Absolutely fantastic. Happy birthday to your blessed friend.

What a wonderful present your friend's husband gave her - a fun filled evening with friends. Looks like you all had a great time! :-)

It looks like everyone had an amazing time. I love the photography, especially the lights. Amazing.

That looked like it was a whole lot of un for all of you. What fun photos to accompany the telling.

My Birthday next week will NEVER live up to this - wow!
Aloha from Philly in Waikiki

What a great surprise for the birthday girl, and all her guests too from the wonderful pictures you've taken.

One again, a pleasure to stop by!