Something unusual, something strange

Last week, I received an e-mail from a representative who works in marketing for a publishing firm in New York. I was informed that they had seen my blog and wanted to offer me an advance copy of a book on behalf of G.P. Putnam’s Son’s. They needed my address to send me the book.

I was surprised, to say the least. I wondered, “why my blog?” when there were so many others out there. And then, immediately I was concerned because of the address thing. So once I had determined that they were in fact, real and not an axe murderer posing as someone from a publishing firm, I decided to go ahead and do it.

Basically, I would read the book and publish my thoughts about it. And, if you recall, I had asked for suggestions for summer reads in a recent post. I just never imagined I’d get an answer from someone at a publishing house. However, looking at it from a marketing point of view, I’d be cruising the blogosphere too, using key words and zoning in on blogs that might meet my requirements. I mean, if I worked in marketing.

Well, the book came immediately and when I arrived home from work the other day and saw a package from the Penguin Group of Publishing, I was really relieved to find that it wasn’t some stalker nut on the internet. 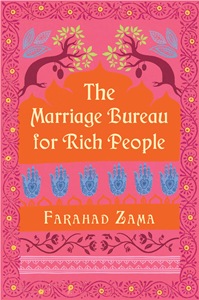 The marketing rep writes: “The Marriage Bureau for Rich People is a delightful read that’s perfect for Summer, about an Indian man named Ali struggling to come to terms with his own retirement in Southern India. He decides to open his own "Marriage Bureau for Rich People" in the front room of his home and start a second career as professional matchmaker. The bureau becomes the dwelling of a whole spectrum of colorful stories and encounters: here, you will meet a father who wants a tall son-in-law because his daughter is short; a divorced woman who ends up reuniting with her ex-husband; a salesman who can't seem to sell himself without Ali's help; and a wealthy, young doctor for whom no match is ever perfect. The novel has been described as an alluring cross between Alexander McCall Smith and Jane Austen--McCall for style, and Jane Austen for the subject matter. And it's not a book lacking in depth either, as Zama's portrait of the trials of love and marriage also conveys the state of India as a country still grappling with the politics of caste, religion and civil unrest.”

You know, it sounds good to me. And I already love the fun cover. So I’ll keep you posted.

I took the post title from one of my favorite songs, “Amie” from Damien Rice.

Something unusual, something strange Comes from nothing at all But I'm not a miracle And you're not a saint Just another soldier On the road to nowhere

Looking forward to your review.

It does look and sound intriguing - will check back to see what you think.

How you came about receiving the book is indeed a bit unusual and strange, but packed with possibilities. The book hype makes one think it might be interesting. I look forward to reading what you think about it.

Cowgirl in the City said...

How weird! You are braver than I in sending out your email... I am always so shocked when I discover how many people "discover" my blog and then talk to me about it. I'm always sure I'll find a stalker.

Have to admit, I was a bit frightened by the title at first.

OH.MY.GOD. I just discovered Damien Rice (oh yes, I discovered him) last week and since have bought everything of his. I can't get enough. I sing it in my sleep.

Wonderful picture of that book. I mean it's just a book, but the depth of field in that shot is cool. And free stuff, cool too.

How exciting to be e-mailed out of the blue like that! If I had to judge a book by its cover then I would say it looks like a good one!

I can't wait to hear what you think of it. It at least sounds interesting.

I'll be waiting to hear what you think of the book...

Oh my goodness, I'm so jealous! lol. That's such an amazing opportunity to get to read a book before it's published and review it and everything. Congratulations! I can't wait to hear how the book turns out to be - hope you enjoy it :)

Lucky you! My library has it on order, so I've joined the queue. There are some very talented Indian writers out there. If its anything like my favourite, Rohinton Mistry, this should be a great summer read.

(By the way, the comment box is telling me I'm spelling favourite wrong, but it's correct for my side of the border!)

How fun for you!

Can't wait to hear what you think about the book.

I love the cover. Ax murderers...in NYC, the publishing world...where o where will they show up next???

Hope it's an excellent read!

Can't wait for the review. I love summer reads. I do enjoy your blog.

And I thought you were playing with the lyrics from 'Comedy Tonight' the opening # from A Funny Thing Happened on the Way to the Forum ...

I await phase two - it all sounds good to me.

I would like to hear Daryl actually sing that little ditty;) Can't wait for your review!

Sounds interesting... I'm curious to hear what you think of it. :)

I love the cover too and can't wait to hear your review. It sounds like it will be entertaining. Oh, and I love Amie, by Damien Rice too!!

now I can say I know a woman who reviews books....

What a nice offer for you! This is my first visit to your blog, what a cozy place to be! Thanks for visiting mine! :0) I'll be bcak for sure!

Can I borrow it when your'e finished? :)

i love damien rice and the pictures are beautiful! i'm having dinner with danielle tonight:) i can't wait. love you

...I love the sound of that book too and I will be waiting with bated breath for your review Miss Kate... ;o)

...I knew you and this blog were somethin' special. Things like this just don't fall from the sky, you're goin' places I'm tellin' ya... :oD

As they always say, "be careful what you ask or wish for"... in this case though it ended up great! How fun for you to be contacted by a publishing house. Enjoy your read! hugs.

Intriguing experience for you....congrats and happy reading! May you have a pleasant and peaceful break from blogging. Hurry back!

Looks like a great read. I look forward to hearing what you think.

My hubby gave me this novel for Mother's Day! I can.t wait to read it now! It was on my pile of books to read. He saw it reviewed last December and thought it was just me!

Have a happy reading, looking forward for what you think about it.