It’s late as I write this and I’ve just returned home from the house of a co-worker who hosted a Silpada jewelry party tonight. Have you ever been to one of those? The jewelry is beautiful and you want everything you see. I ended up getting a belt for myself.

I would have liked to have a few belts of something else, if you know what I mean. But I was the designated driver and the roadways were dark and unfamiliar. And it was raining.

So no belts for me.

Soup for me, though. Maryland crab soup. I must admit that I ate two bowls. Alisa makes the best crab soup, letmetellya. 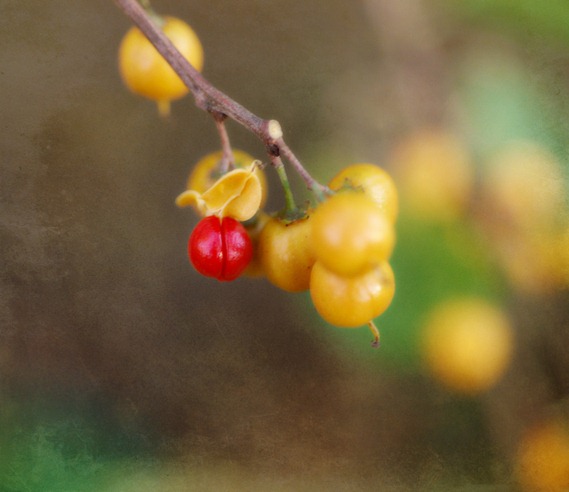 George is doing much better. Thanks to so many of you for the advice on the flea allergy dermatitis he has.

If you have cable, tune in to the Food Network tonight. Pioneer Woman has been challenged to a throw down by Bobby Flay and they’ll be cooking up a storm in an hour-long Thanksgiving-themed show to air Wed., Nov. 17 at 9 PM (8 PM Central). Check it out! It should be fun.

You can read about it {here}.

And on that note, I wish you all a beautiful Wednesday. I’ve got a hair appointment in Hoitytoityville after work. Woot.

That's a beautiful photo. The texture and colors. Lovely.

Cheers to you for not drinking and driving! Glad you found a pretty belt. Hope your hair-do appointment is all and more~! I'm looking forward to PW's throw with Bobby!

Glad George is doing better! Thanks for the 'heads up' about the cooking show - I'll be rooting for the Pioneer Woman:)

Wow - Thanks for the tip on the PW/Bobby Flay show. I'll definitely tune in and had not heard.

Blue Collar Joe - the guy who does the world's best doughnuts and is the brother of the owner of Sandpiper Restaurant here in Mathews - is at the Food Network studios now doing a challenge. It's very exciting!

Hope George is feeling better and that your week is fantastic.

I do believe our Maggie is going through the same thing as George right now.

Hope George is getting better!
Nice photo. Glad you had a nice evening out at the party. Have a great day !

I need a haircut myself in the worst way.

A friend sells the Silpada line....I love it too....too bad that this time of year there is nothing in my purse for me to spend on me.....
Thanks for the tip on PW, love that girl!
smiles...

I've been to a Silpada show! I love the stuff. And I had a few belts for you last night. You're welcome.

glad george is on the mend....and now some good TV watching tonight :)

Glad George is on the mend ... and congrats on the belt, I've never been to/heard of Silpada ...

Oh dear, I'm sorry, it seems I've missed the news about George. I hope he's on the mend now - four female collies sending him lots of licks for a farm in Northumberland!

...as long as it doesn't interfere with Survivor:) I still can't miss that show after all these years...

Glad that George is itching less!

I've never had crab soup but it sounds scrumpdillyicious. I guess I'll have my potato soup instead!

Glad George is feeling better! Hey, that reminds me, I need a haircut too...hm, how to fit it in before Thanksgiving???

Oh boy ... I definitely need a cut and color!
Good news about George!

Ooh - that soup sounds delicious. Now if only reading about it could make it appear in front of me!

Your Hoitytoityville cracked me up! I could use a good belt as well, it's wild and windy outside tonight. Enjoy your evening Kate! xo ~Lili

I stumbled across your blog not long ago, really like it!

I don't like Pioneer Woman, she seems like a real phony. Sorry but just how I feel.

From Beyond My Kitchen Window said...

What a lovely blog you have. I have never had Maryland crab but heard it is delicious. I am a New England blogger. Stop by and visit if you would like. New followers are always welcome.

Darn it darn it darn it! I missed the the throw down! I meant to record it. So if I stay up til 2 am it will replay! LOL!
I am so far out of the habit of wearing jewelry anymore, I don't bother with the shows. I am trying so hard to be more chic again and be better about it, but I just can't seem to do it!

Darn, I missed PW on the Food Network! So glad to hear George is doing better. Soup is the best, I could live on soup.