I mentioned in my last post that I was just going to just let the weekend take me wherever it led and I’m here to tell you that I did precisely that. I spent it doing what I felt like doing and had no obligations other than some laundry.

So I spent it doing 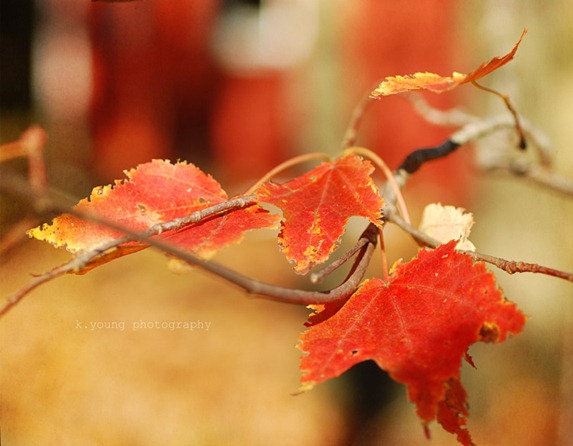 I took photos of leaves. These looked pretty against the color of the ground and the red of the barn. 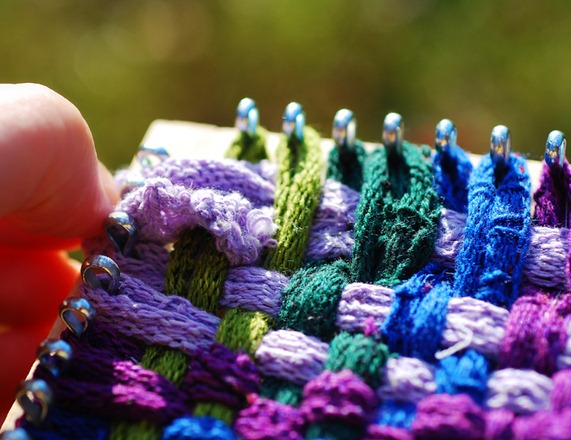 I finished another potholder. I must be buddah cuz I’m on a roll.

I’m cracking myself up. 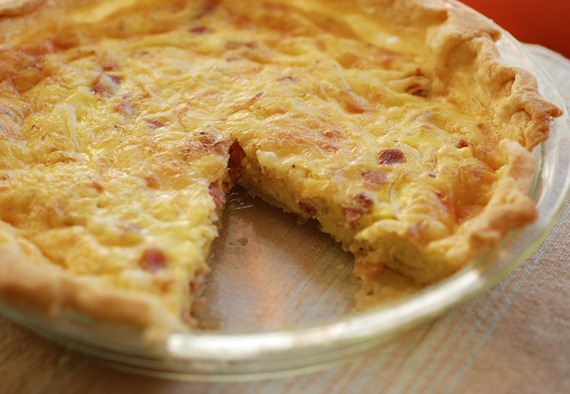 I wanted quiche for Sunday breakfast but didn’t want to have to go out to get any ingredients. Checking the frig, I saw I had eggs, half & half, some leftover ham slices, an onion, cheddar and swiss cheese. When I found the half box of pie crust mix in the cupboard, I took it as a sign. (I don’t make my own pie crust and have used a box mix for years.

5 eggs, about 1/2 cup of half & half, 1/3 cup each shredded cheddar, Swiss cheese, ham cubes. About 1/3 onion, sliced very thin, sautéed with butter and allowed to cool. 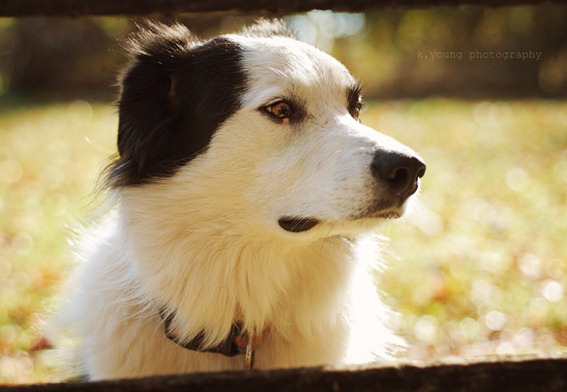 I had the macro lens on the camera and was taking pictures of leaves when I turned around and saw George watching me through the fence. Maybe I’ll enter it in PW’s ‘Four Legs’ assignment. The competition is pretty fierce, though. Group 1 and Group 2 have been posted and I was pretty blown away by a lot of the submissions. 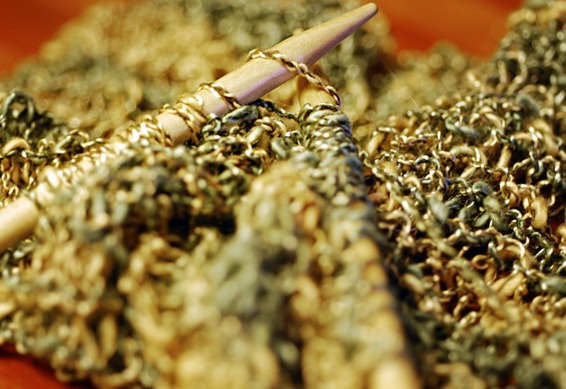 I bought some yarn on Saturday and started another scarf. I love the colors and it felt so darn good sitting outside in the sunshine and knitting while watching my husband take the garden posts down. 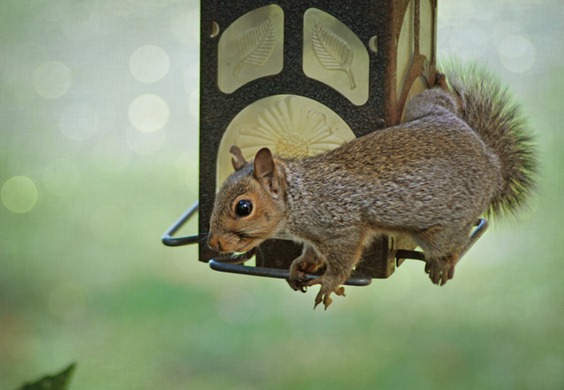 This bold brazen article. Note the right ear. I shot this through the kitchen window and thought that the background color was sort of pretty. I layered it with Flypaper’s phosphorescence texture (from tex box one-the original). I received several e-mails recently from people asking how to apply texture to a photo, so I sent them {this tutorial} that I wrote back in March. Hope it helped.

Next weekend, I have Big Plans and it should be fun.

Thanks always for your visits. It’s so good to have you stop by.

Until tomorrow, then my friends . . .

That first frame is absolutely gorgeous!

Well thank you very much.

It sounds as if your weekend was absolutely perfect!

Love the new header look! And LOVE that squirrel! He's a minx for sure! :)

...So you wanted a lil' quickie before breakfast Sunday morn', huh? *wink*wink*nudge*nudge* hee,hee,hee

...I love everyone of those photos and I say enter the one of George. That look on his face is priceless! lol...

These are excellent shots! I think you should enter that photo of George in PW's new contest. It's right up there with groups 1 and 2, imo.

Sounds like a very nice weekend. And that phrase "bold, brazen article" brought me back. Remember Mother Superior used to wag her middle finger at the recipient of her wrath? She was scary- but mostly because we knew she was nuts (God bless her soul).
Looks like you were very productive amid all that sunshine and relaxation.

Love your bits of "this and that!" Will you show us the scarf when it's done? that is gorgeous yarn!
xoxo,
Mary

you have so many talents...knotting..baking...tutorials..the photos show such a wonderful "this and that!!"

Your weekend sounds WONDERFUL! Isn't it great when you don't have anywhere you HAVE to be? During the week I always feel like I'm in overdrive so on the weekends I like to be able to just take life as it comes. Glad you were able to do the same.

What a wonderful weekend you had ! I love these type of weekends ! Your photos are great ! Were did you get the writing font for your blog, by the way I love your header and signature! Have a great day !

I'm sorry. I was going to say how beautiful the photos are and how wonderful your weekend sounds but TJs quickie before breakfast comment has me snickering.

Great images Kate - Love that little squirrel - maybe you could enter him in PW's contest, too?

I just posted about my pie crust, then came over to your blog and see you did the same.
And you are making another potholder....yay.

Great scarf you are making there. And your pictures ain't too shabby either.

Awww look at George's sweet eyelashes. The yarn looks like a perfect little luxury and I so love knitting with bamboo needles too. xo ~Lili

I laughed when you said....
"see the squirrel's ear"...
and then
"I shot him through the window".
Very funny.

I would say you have two entries just in this post.

There are some stunning photos in that competition...I entered two but have no hope.

Nice shots. I kind of had a this and that weekend myself.

It starting to be knitting weather for me too. I find I don't knit in the summer months.

So wonderful! And that squirrel cracks me up. I bet George would like to claim that ear notch;)

What fun ... for several seasons we had a little squirrel that came to our back window to beg for peanuts .. she had a rip or notch in her ear so we named her Nacho ... she even brought her babies to visit once or twice ...

sounds like a nice weekend...love the leaves photo...George of course...and the squirrel...

Oh my ... I really don't think you could have spent your day any better! I think I missed the post about the potholder ..... can you send me a link on how to do those (if there is one) I'm not much of a knitter but the colors in that scarf are amazing!!!!!
What a grand post!

Luv the photos that were submitted. But, you should enter, your's are just as good.

Your quiche looks delicious! I love quiche, and now I'm thinking we might be having one for dinner tonight. I'm sure I will have no argument from Matt either - he loves breakfast food any time of day.

I think you should enter the squirrel in her Four Legs contest. He's gorgeous.

LOVE the shot of the knitting and yarn. Is that a rayon yarn? If so, is it difficult to work with? I HATE smocking with rayon floss and just won't do it anymore. Threw all of mine away. It's glossy and pretty, sure, but it untwists and frays like a bugaboo. Just wondering if the yarn is the same way.

That sounds like a nice relaxed weekend Kate - the best kind. There is nothing better than doing one#s own thing whilst at the same time watching someone else do the work. Nice photo f George.

Nice to be back here Kate. Long time no visit. But I can tell you are doing a whole lot of this and that. And always gorgeous pictures of nature and animals. Ah...

Hope you are doing fine, and that winter is far away from your home. I don't like it and today has been a very cold day. Brrr... freezing all the time. I'd rather be on Bora Bora or maybe Hawaii. That would be perfect for me.

You make me wanna be a better photog!

Love those picture, especiall the potholder. Made me very hungry for quiche though!

This seems to be just the right kind of weekend to me!

Love each photo...they have their own worth and value.

Are you going to sell that scarf on etsy? I want it!