I love basil, and other randomness

I’m taking a break from all the Maine vacation photos I’ve been forcing on you to bring you random thoughts about the universe. Or rather, my universe – which exists in this little section of Maryland on the top of a hill surrounded on all sides by Surburbia.

When I arrived home from work today, I made a salad that I’ve have been having nearly every day at about the same time. The counter in our kitchen always seems to have freshly picked tomatoes on it, and by the sink, I usually keep a vase full of basil from the garden. When my eyes see the both of them together, I will not be satisified until I have a caprese salad. 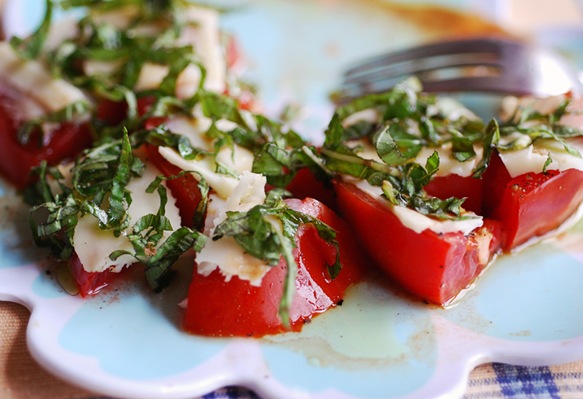 Today, after arranging everything on the plate, I suddenly decided that it looked nice enough to photograph, so I took the plate into the breakfast nook, adjusted the camera and was almost ready to take a shot when my cell phone rang.

I put the camera down and answered the phone. When I was finished, I sat down to eat my salad and it wasn’t until I was half-way through when I realized that I hadn’t even taken the photos yet. I had the camera sitting right there and had completely forgotten what I was doing.

So I took the pictures anyway.

And I think the half-finished plate look is working well here. At least, that’s my story. And I’m sticking to it.

Last year, I bought some Celestial Seasonings ‘Cold-Brew’ teabags in the peach flavor and had forgotten that that it was in my tea cabinet until my husband pointed it out to me today when I was jonesing for some iced tea quick. I’ll be the first to admit that I have issues with tea, specifically for the apparent massive collection that I have of it. I just wanted to say that CS Cold-Brew in Peach tastes really really good.

So I thought I’d try it with a little vodka in it.

I don’t know, it was cocktail time and I felt like being wild and crazy. But oh, it was bad. Oh, not good at all.

And then I took a second sip. Ugh. Not good still but I wanted to be sure.

By the third sip, it was actually tasting a little better.

And by the tenth, I wondered why I hated it so much in the first place.

Last night, I watched a movie on Netflix that I can’t stop thinking about. I’d originally seen Life As A House at a theatre when it first came out ten years ago and was moved by it then but had forgotten much and was wanting to see it again.

The movie stars Kevin Kline in one of his best roles, in my opinion. He plays a man who’s keeping the shattering news of his terminal illness to himself while at the same time trying to build the house that he’d been dreaming of for years. Hayden Christensen delivers a stunning performance with his portrayal of the estranged son whose entire being is transformed by the end of the film. Kristin Scott Thomas, Mary Steenburgen, and Jena Malone round out the casts’ core characters. It’s a little bit of a tear-jerker, but a telling look into the fragility of the human condition. But the star of the film for me is the location, breathtakingly set on a cliff overlooking the Pacific Ocean. My favorite scene involved a sunset and that's all I'll tell you about it, other than how good I felt after having viewed this little gem of a film.

My cat thinks she is the Queen of Sheba. And it makes it very difficult to go up and down the steps. she is a beautiful girl. and mmmmmmmm basil.

i read that book - it was wonderful.

Blackie IS the Queen of Sheba as all female cats are. That's what my two calico girls tell me anyway.

well... I guess I pick up some fresh mozzerella when I go to town Saturday...

You gotta love Netflix. Read about a movie, go to the website, add it to your Instant Queue and in less than 30 seconds, you're watching it!

Now if I start crying, I'll know who to blame :)

Hope you enjoy then, JackDaddy. I'll take all the blame.

Very enlightening randomness...I did like the plate and am leaving to hit my pile of tomatoes.

Of course the cat is queen! The royalty shows in her eyes.

Love the salad and I think the photo is perfect, especially on the light blue plate:) Cheers! I'm drinking a Firefly Sweet Tea flavored vodka with lemonade right this moment as I'm reading your post:)

You make me want to try Netflix, but first I will have to wrestle my husband off MLB.

I have an abundance of tomatoes and basil right now. And since I haven't had a Caprese salad before, I think that I'll be on a hunt for a recipe now after seeing that photo!

My favorite salad EVER, and so easy to make. We, too, have a bowl full of fresh picked tomatoes and the basil is right outside the back door... your photo makes it look all that much better!...

Have not seen the movie, will look for it, thanks!

Oh my gosh Kate....I was chuckling and nodding my head, to your vodka in the tea experience. Sadly, that was pretty much how the story went, when I snuck a cigarette from my parents as a young teen! It was so horrid, but the next day I forgot why it was so bad and tried again, and so it went. What a fool I was, for years. (I quit many ages ago, thank goodness. How nasty of a habit that was.) I like your story much better. Now I'm jonesing for some peach tea with vodka. ; )

That salad looks delish...I especially like how you took the photo after eating it a bit. And ou cat...lol...they all act like the queen of shiba (which ironically was the nick name my mom gave me in high school).

I love all this randomness!

First of all, did we forget to make the tomato thingie at Blog Fest? The ones here look amazing. There really is nothing like fresh tomato and basil, unless it's tea and vodka! Ole!

The movie - how do you find time to watch movies? I'm in awe. But this one does sound good.

I have the King to match your Queen, and evidently his goal is to kill me by causing me to fall face first going up or down steps, towards the kitchen or bathroom, or by suffocating me when I sleep.

Does anyone know where a tomato-starved woman can buy home-grown tomatoes in the Houston area????

Kate:
I laughed out loud about your peachy vodka tea experience. I bought some bottled (I think Smirnoff) mojitos about 3 months ago. The first one really sucked, so the rest just sit in the fridge. Now, after your experience, perhaps I should tackle a few more bottles Friday night to be sure! I'll get back to you on it.
xoxo
Donna

Of all the kinds of salads...that is my favorite...How can you go wrong with basil, summer ripe tomatoes, and mozzarella...I don't blame you for forgetting the camera:)

Love that Blackie!...Cats do rule:)

2. At least your cat lies in FRONT of you. My cat runs behind me and bats at my legs. It's all I can do to not fall ass over applecart!

Your kitty is so darn cute. And I love that salad too. I'm thinking I may have done that with an alcohol combo before...that's so funny! ~Lili

Guess I like all your *issues* CG, since I seem to keep stopping by here for more (HA!). Being human together is so GRAND.

Tell your hubs thumbs-up on those 'maties...that those of us in the Pacific Northwest haven't seen a ripe one yet, canyoubelieveit?! you and your dang -- what wuz it you said...ooh yeah -- "the counter in our kitchen always seems to have freshly picked tomatoes on it..." Well lahteedah for you. harumpfh.

Swallowing very sour grapes at the moment, s'cuse me :>[

p.s. i adore tomatoes. the end.

I love long random posts...sometimes we just have too much to share to keep it short.

And for my lunch today..I have a container to sliced tomatoes from my garden with salt, pepper and olive oil..cannot wait!

Lovely post this morning. I saw that movie years ago and it has really stayed with me. However, I had forgotten the name of it. Thanks for reminding me. Netflix, here I come...

And I agree, that sunset scene will be with me forever.

I like your stream of conscientiousness. Basil is taking over my garden this year! I need more recipes. :) I personally think peach tea is gross in any way shape or form, maybe a shot of flavored vodka like raspberry would help!

I'd like to see Annie drink vodka and castor oil. Now all I want is that salad. I'll be down there in a few hours;)

Mama better pick me up on the way .. I would pay to see Annie drink Caster Oil/Vodka ... Nora's tomatoes would have been yum like that ... why didnt I think of it!

And Blackie .. she was definitely ready for her close up.

Blackie is a Queen!

Luv the pictures. Have a great weekend.

looks like a yummy lunch...it's amazing how after 10 or more sips of anything with Vodka...tastes great...LOL...your cat is the Queen of Sheba...

Your images of food always look so good. I don't even like tomatoes but your shot makes me want to eat that salad!!

Also one of my favorite things. Don't often have basil handy, but drizzled w/EVOO and a lovely balsamic vinegar and I am a happy woman.

Looks so very very good..
Have a wonderful day. Im heading to the store to get all the things to make this.

That's a movie I haven't seen yet.... May have to rent it since I haven't noticed it as being on Pay Per View. *they really need update what they offer more often*

I have some fresh mozzarella in the fridge... thinking of having some on top of my grilled burger tonite. Or perhaps in a little side salad.

I loved this from food to movies to the lovely stair hog...

Sheba and Barack look like they could be brother and sister... but then, there's probably a lot of black cats that look related. LOL

Loved this post... and I'll have to remember that movie. It sounds wonderful.

Our tomatoes are green so far, no red ones yet. Our green beans are mysteriously disappearing. We see new beans popping up, then we see them almost ready to pick, then the next day or two, voila, they are gone! Not sure if a bunny or bird might be getting them? There is no tell-tale bunny scat or other damage in the garden. Hmmm. Cukes now, are another story. We are overrun with cucumbers!!

P.S. I'm always experimenting with drinkies. You cracked me up with your peach tea /vodka experiment! :)