One. I did sleep in the tent last night. Did you think I was kidding when I said I would? My husband, on the other hand, elected to stay inside in the nice soft bed. So George and I went outside under the stars in the tent. For some reason, I woke around 2 in the morning and was surprised to see that there was no dog in the tent with me. Upon closer inspection, I saw that he had somehow burrowed his nose between where the two zippers met and let himself out where I’m sure, he was gallivanting about and cavorting with squirrels. 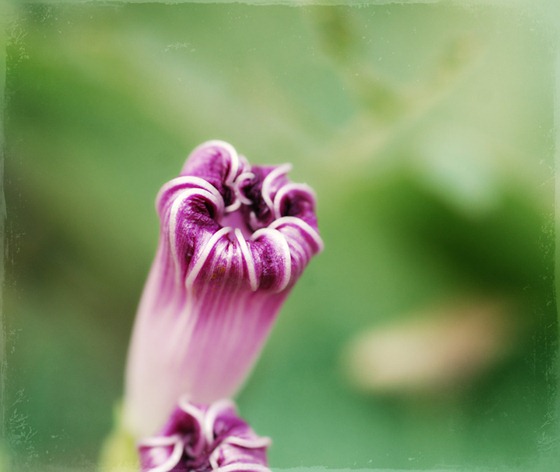 Two. Today it rained and we sat outside on the little back porch and just watched for awhile. It was soft and gentle and we were content to just look. I love a soft summer rain, don’t you?

Three. Today, because it was raining and my husband was watching golf, I opened my computer and went onto Netflix where I queued up a little number called Dragonfly. Kevin Costner plays an emergency room doctor who has lost his pregnant wife, also a doctor. Kathy Bates delivers yet another solid performance as the next-door neighbor and friend, but it’s Costner who surprised me the most. In one of his best performances to date, Costner perfectly fits the role of the doctor who may or may not be slowly going insane. Darkly filmed in a sort of Sixth Sense-method, there’s a little suspense and a little bit of a mystery as it begins to dawn on the good doctor that his wife may be trying to reach out to him from the grave. But it’s the profoundly joyful ending that left me in tears of happiness. It’s a perfect movie for a rainy afternoon.

Or any other time, for that matter.

I really like a movie that leaves me feeling good.

If only George had had a web cam attached to his collar! How fun would that be?!

Lovely pictures! I love George! My border collie is named Sasha, How did I ever live without her? Do you find yourself saying that about George?
I loved that you slept in a tent, I have been threatening to do it all summer. We have had too many skunks so I have chickened out, I love your photographs, they are works of art.
Thanks!

okay...i promise to see this movie !

George had adventures on his mind!
I've seen that movie, and it was good...always liked Kevin Costner
Love your flower photo and gentle rains...
Sleep well..
Deborah xo (purehunnybee)

Wow - am quite impressed that you tent-ed it! I am a 'nice inside bed' kinda gal, but at least you have a proper toilet and hot water nearby!
:-)
BB
PS thanks for voting at my place - the calendar is really shaping up!

:) you're a better woman than i - sleeping outside

and...i don't remember much about that movie but i remember seeing it years ago when it came out. and i liked it.

Kate:
It sounds to me that you had a perfectly blissful weekend. I wish it would cool down enough so that we could sleep with the windows and doors open. That would be wonderful. Perhaps by the end of September...
I look forward to hearing about how your week progresses, too, my friend.
Blessings,
Donna

I love love love a summer rain....expecially at night, but the afternoon is good too. I like to open up all the windows and feel the cool breezes that the rain brings and lay on the sofa and watches movies too. :) I also like to sleep under the stars and up here in Alberta being so close to the mountains the night air is nice and cool...I so enjoy hearing about your adventures, thank you for sharing a piece of your life with us. Your photos just give even more life to your stories!
Karen
karen_bremermann@yahoo.com

I shall seek out that film, thanks for recommending.

Feel good movies for me, I don't want to cry.

I love summer rain...gentle, stormy, every which way...I love the smell of them and the freshness they leave. And I love how they give me a good excuse for being lazy and staying on the porch reading or in the house watching a good movie:)

Just had a wonderful time catching up on your posts...lovely as always!

Oh, there is something so peaceful about a soft summer rain! I love the smell, and the sound, and the sight of those first few drops... :)

I couldn't sleep in a tent! Sometimes I wish I wasn't so soft but it's all those creep crawlies that put me off!

OK... I'll fully admit it... I am not a campy girl. We just got a new memory foam mattress and if I had to choose between the ground or it.. hmmmm....

I'm itching to go camping, more now than I was. Dragonfly is an excellant movie.

Sleeping porches are wonderful as well but my four monkey's wouldn't let me get a wink if we slept outside. Too many night things to go, see, do...

As long as Mr Costner was not trying to use an accent I would probably enjoy this ... sleeping outdoors .. no thanks ...

I'd never be able to get off the ground if I tried to sleep in a tent!

I have seen that movie, it is a good one, made me love dragonflies all the more.

Of course you slept in the tent! Made me laugh to hear about George escaping though.

I've never heard of the movie, Dragonfly before. I'll watch for it, although I'm not a Kevin Costner fan.

Can't wait til I can sleep out on the porch. Still too humid & warm.

Loved Dragonfly! Haven't seen it in a few years.

Now that sounds like a wonderful weekend, all except the cavorting with squirrels at 2 a.m.

I need to keep a running list of all the good movies you've seen, but this one sounds particularly appealing.

Oh man, George escaped and left you sleeping unguarded?! What a wonderful sense of fun you have Kate! ~Lili

soft rain is such special treat!

So very beautiful.. Love your view.
Amazing how you just love someone photography and seems cant see enough of it.
Thanks for sharing.

catching up here a bit tonight,
sorry about your lens, and knee,

your photography is just so , just so, perfect.

Dragonfly had every emotion that you can possibly feel--didn't it? Fabulous movie. And to mix it with a lovely rainy afternoon--how perfect. The smell of rain on the street is my favorite scent. You post is beautiful.