Reflections on vacations past

Until only recently, nearly every summer vacation of my entire adult life was spent on the beaches of North Carolina. I first began going when I was 20 years old -- my boyfriend’s parents had rented an oceanfront house at Hatteras, just outside Hatteras Village. I fell madly in love with the wildness of the area, and I remember going to Ocracoke Island on a ferry and having this feeling . . . it felt like I was coming home.

I ended up marrying the boyfriend and family vacations continued on Hatteras every year until we decided to begin taking our own, just our little family, rather than going with the entire group. One year, we waited too long to choose a rental house and ended up staying on Ocracoke.

We never stayed in Hatteras again. 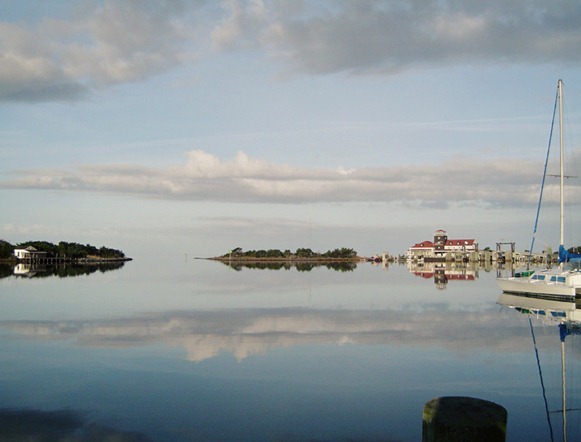 I took these photos around Thanksgiving, 2006 with a little Sony Cybershot, my first digital camera. I love the reflection of the clouds on the harbor here. Ocracoke Village lies at the end of a 16-mile long island and there is not one house that was built on the beach. The homes are all around the village and the sound side. In the photo above, you can see the old coast guard station on the right and the inlet where the Swan Quarter and Cedar Island ferries come in.

The little house that you see on the left is one that we rented when our children were very young. It was one of my favorite memories on the island. It was fall, the crowds had gone home, and we had the beach all to ourselves. 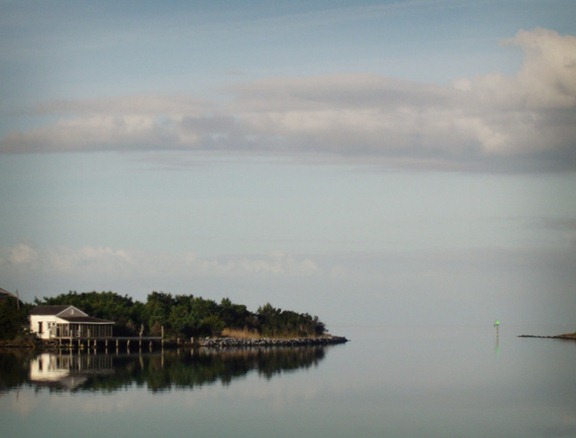 I have no idea how I found the house because back then, there was no internet. The house sits on Windmill Point and has been renovated since we stayed there in the late 80’s. It’s old-fashioned and I love it. Rental info: [Windmill Point Cottage]. 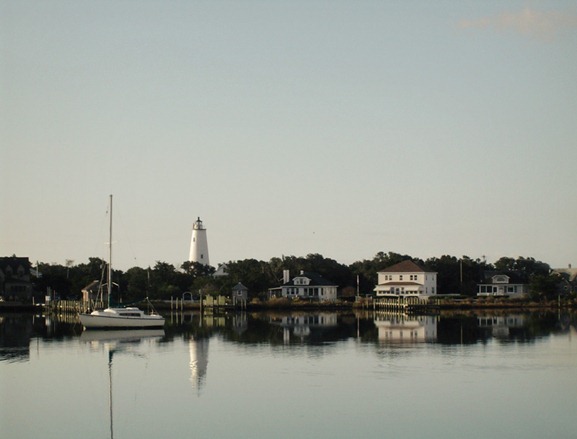 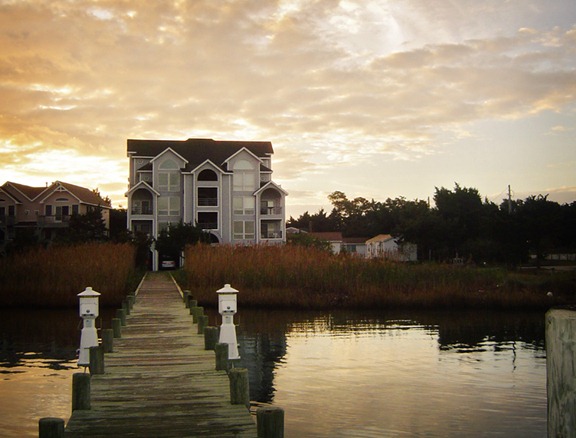 In 2006 we stayed here, at [The Pirate’s Quay], on the 2nd floor. We didn’t have a dog at the time, so we won’t be going back there anytime soon. It has a wonderful view of the harbor and I highly recommend the place, if you’re not traveling with pets. It operates sort of like a hotel, with daily maid service. 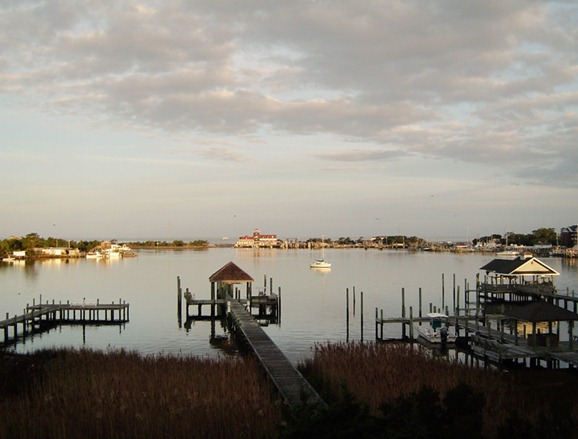 This was the view from our deck. If you look just to the left of the coast guard station, you can see a ferry coming in. Or maybe it’s going out.

In November, the weather is absolutely gorgeous on the Outer Banks. And every evening, just before sunset, we’d pack a bottle of wine, and maybe some cheese & crackers and head to our secret place. There’s a cottage right along Teach’s Hole that we’ve always loved for its simplicity. And often, when we were vacationing, it wasn’t rented. It didn’t have air conditioning, and I don’t think it had heat either. We were breaking the law by trespassing, but it only made it all the more thrilling.

We called it the sunset cottage and enjoyed just quietly sitting on the deck with our drinks while we watched the most beautiful sunsets.

For those who don’t know, Edward Teach, aka Blackbeard, was killed here at Teach’s Hole on an early November morning in the year 1718. There’s a lot of pirate lore on the island and it’s quite fun for the children. 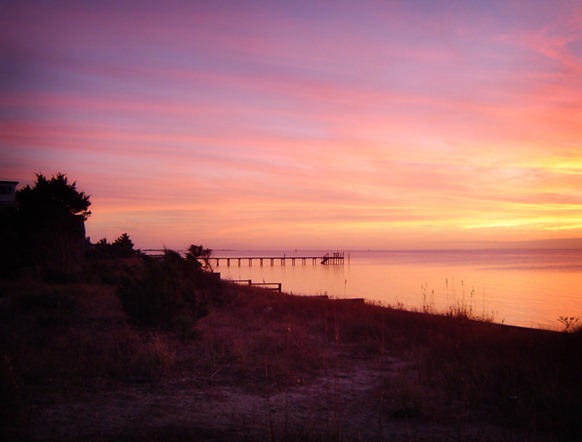 This is the view from the deck of the little cottage that we so brazenly visited. Checking the realty company's website, I see it’s no longer for rent on the island.

And you thought I only loved Maine, didn’t you?

That sure is a sight to see! Breathtaking views and beautiful sunsets.

Isn't it funny how we ever found anything without the internet? LOL!

Wow! beautiful photos! I love the reflection of the water in the first shot.....just gorgeous:) Hope your knee is doing better!

How very beautiful. I enjoyed your words as well . Sounds wonderful . I feel like packing and heading out mind you I would have to convince my hubby to take one more vacation.
Loved your blog and your view.

There are so many beautiful places in the world..and this is one..wish I had the time and money to see them all! Come say hi :D

WOW - I'm a Carolina girl myself and Hatteras really is beautiful. However, your pictures are really amazing.

That last photo made me catch my breath. I've never been to the Atlantic coast, so I love the little glimpses you give me. I hated living in the Midwest where a coast was too far away to drive to; I love Oregon!

If it involves the ocean in any way shape or form, I love it. We usually vacation in SC. I love the pirate stories that reside along that coast. :) we are considering NC next year hopefully sharing the house with my siblings. SO I will add these places to my list.
Thanks again for sharing.

this is where i want to live when i retire - it's my dream.

Outer Banks is one place I long to visit. There isn't anything like staying near the water! Enjoyed your words and your lovely photos!

What beautiful pictures. I am researching on the net for a RV resort that can hold our 42 ft on the Outerbanks. I love the food, the people, and the water.

Arg! There be real gold!

Love thinking of you using a lowly point & shoot like me...look at you(r photos) now!

I've been to Ocracoke. We rode the ferry, it rained the whole time and my daughter ran off the road and got stuck in the sand. Other than that, I LOVED it!! I want to go back.

The Outer Banks is a gorgeous place, miles and miles of uninhabited seashore and glorious skies. Your photos are great - I really love the reflections in the first one.

In the first photo I love how the waterline is almost undetectable and the horizon is mirrored in the water below. Beautiful.

Love the photos and love the story, particularly the one about trespassing, which is near and dear to my heart.

Ocracoke really is a special place, even more so in the off season. I'll be not too far from there starting Saturday and hope to make it down there one day. Of course I'll be tripping over tourists, but that's OK.

I've only been once to the Outer Banks, and didn't have much chance to visit around since I was there helping prepare for my goddaughter's wedding, but everything I've seen and heard about that stretch of coast is beautiful.

The wonderful thing about human experience is that we can love many places, and hold many memories. Makes life grand, doesn't it?

Can you believe I have never been to the shores of North Carolina? I know. A sin. I will have to rectify that soon...

This is a very timely post for me, my husband and I are planning a trip to the Outer Banks for our 10th wedding anniversary next year. Now I really can't wait to go!

Beautiful shots. I think you luv the water!

Have a great weekend.

One of my favourite places on the planet too, Kate. We go to Whalebone Junction and rent a cottage there that belongs to one of the oringinal families....to look at the place you'd think...hmmmm,but we get the cottage at the end, with the view!!!
but the people and the location is just fantastic. Have been to Hatteras and Ocracoke and love those too. All the way from Duck to Ocracoke is Heaven by the sea. Got to spend three weeks there one year and we felt like natives at the end. Used to know ALL the stories and have all the books....should read them again!

Love the reflections in these .. twice as beautiful

Despite living in North Carolina, I have not been to the Outer Banks in years - ok, ok, decades. Frankly, they are a very long drive from here and the SC beaches are closer. But, we keep talking about packing up the RV and experiencing the OB again.

Either way, we never go in the summer - only in the fall and winter. It is the most beautiful time to be down there.

Beautiful! They take my breath away.

Oh my stars! I've always wanted to go to Okracoke! We had a folk band come to our Elementary school who was from there and I fell in love w/ their music and Okracoke. Love your pictures..makes me want to go there all over again. Maybe one year I'll get there!

Wow Kate, you should be doing brochures for the island tourism office. Those photos are amazing!!! And I find myself once again quoting Tina Fay:
"I want to go to there." :)

Gorgeous. I need a vacation. And that was like a little mini one right there. Thanks, for that.

Just gorgeous photos of yet another place I have never been...I sure have a lot of traveling to do someday! When I think of Hatteras I think of hurricanes...and these photos look so beautifully calm and peaceful...

Oh the light is gorgeous there! And, it's so interesting to me that my parents once visited the Outer Banks (I've never been) and they said it reminded them a lot of Maine. Does it you? ~Lili

We stayed on Ocracoke quite by accident on our way to Cape Hattaras. We absolutely loved it. The beach was nearly empty and just beautiful.

Wow. May I have that camera?