The kindness of others

The other day, I wrote that I missed my macro lens terribly but would learn to live without it until the folks at Nikon mailed it back all fixed. I’m sure you’re all getting quite tired of it all.

Well, a friend wrote me that day, telling me that she wasn’t using her macro lens very much and I was welcome to borrow it. I was stunned, but politely declined, thanking her all the same.

And then a co-worker from school e-mailed me the same day, asking if I wanted to borrow her lens over a weekend. I thanked her and told her maybe I would do that but I was fine for now.

And then the first friend wrote back and insisted that she really was not using the lens all that much, and she’d be glad to lend it to me. Then she packed it up and shipped it FedEx. And it came today!

I think she got tired of hearing me say how much I missed it. I don’t want to embarrass her by revealing her super hero identity, so that will be kept my secret for now.  She knows who she is, and I thank you, my friend. 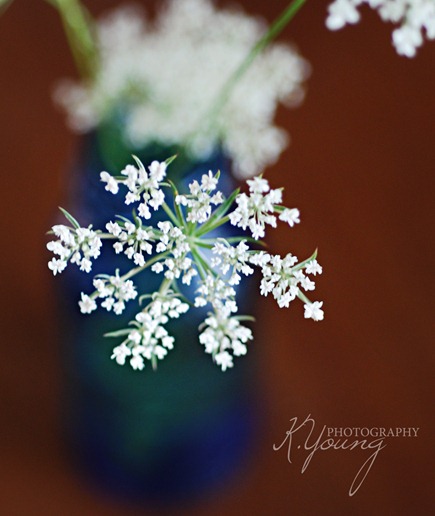 I had some tiny little Queen Anne’s Lace that I’d put in a little blue vase, so I tried out the lens on that this afternoon. The light was low but still, I am happy. 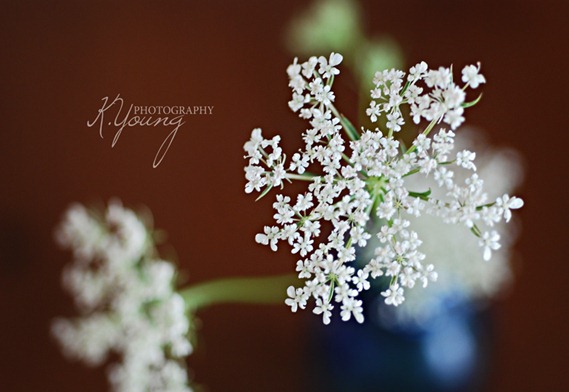 I was happy all day, in fact. There must be something in the air, or perhaps it’s the wonderful weather that we’ve been enjoying. I was even glad while paying all my bills tonight.

My husband is laughing at the TV and George is getting upset that I don’t keep tossing Scary Bird. I’ve thrown it at least sixteen times. Enough already! The odd thing is that he’s fetching it when it’s called either Scary Bird or Paraguay Falcon. I guess my husband has been working on him. Either way, it’s been a month now and it’s still his most favorite toy in the world.

Besides frisbees and sticks, that is.

What a wonderful friend! I think I know her...she is fabulous!

I just love a post with great photography, wonderfully kind people and scary birds! That is too cool Kate. ~Lili

You're lucky to have such a wonderful friend! Macros are my favorite; and even though my camera is not a DSLR, the best feature about it is the macro setting. Enjoy your weekend!

This flower is the color of true friendship.

I've just caught up on a weeks reading. I won't go into the reasons for this. Sufficient to say I am not impressed with IT right at this moment in time. However!! Blackie is getting some screen time. Hurrah!! and those archive photos were fabulous - especially the stairs. And the lovely photos of the former holiday places.
Ms Soup

I've just caught up on a weeks reading. I won't go into the reasons for this. Sufficient to say I am not impressed with IT right at this moment in time. However!! Blackie is getting some screen time. Hurrah!! and those archive photos were fabulous - especially the stairs. And the lovely photos of the former holiday places.
Ms Soup

Nothing like a great friend. Queen Anne's Lace is one of my favorite flowers on my farm. Love your shots of it.

What a great friend:) Beautiful photos as always!

That is an incredible friend!

Stunning.. Nice to hear you have your lens back. I would be lost without mine.

wow.. what awesome photos and a awesome friend. you are blessed....

wow what story ..and what lace ..blessings dear

happy friendships - what a wonderful tribe that we have.

Gorgeous! I love the color combo in the photos, truly stunning. I love Queen Anne's Lace, too.
And that kindness thing, it's such a good thing, isn't it?

Holy smokes girl - they are GORGEOUS. I adore that brown bokeh. WONDERFUL.
:-)
BB

Those moments are wonderful...when there's the feeling of genuine and simply happiness and contentment with the little things. Those Queen Anne's Lace photos are beautiful. I love that weed.

WOW, my friend! Glad you got to borrow that puppy;) We would not have been treated to these....

Aren't good friends Just Wondermus!
It's always nice to know that someone is thinking about you no matter what. By the way...love the flowers in the blue vase!!
Have a GREAT FRIDAY!!
(I get to see my grandson's new hearing aids. he's 2 yrs old and we just found out he's partially deaf. It's been fun listening to my daughter describe how he's hearing things clearly for the first time. Life is definitly good)

Love the photos. You deserve the kindness you receive.

Hurray for you! How nice is that???
Such beautiful photos, Ms. Kate. As always...

It is great to have nice friends! :)

CAN I GET A COPY OG THE QUEEN ANN LACE? EITHER THE FIRST OR THIRD ONE!

Beware!...an award awaits you at my blog.

Yet another useful entry for me. You keep putting out some great info!

Kindness ~ it really makes the world go round :) What a sweet friend you have!!

What a great friend.

Scarey bird would be easier for me to remember.....