Sometimes I really enjoy boring weekends and this one was no exception. We had some needed rain and I did some needed cleaning, but aside from that, not too much else was happening here at the Casa de George.

I’m only just beginning to miss my macro lens but will have to be content with my other lenses until I hear whether or not it’s even repairable.

I shot these photographs using my 50mm lens and wanted to share them with you. 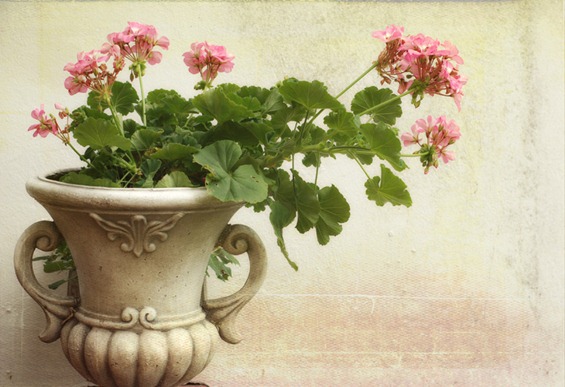 This is one of a pair of urn planters that I have on the little back porch. I used one of Florabella’s vintage luxe actions on it, and then layered on this texture from les brumes on Flickr. 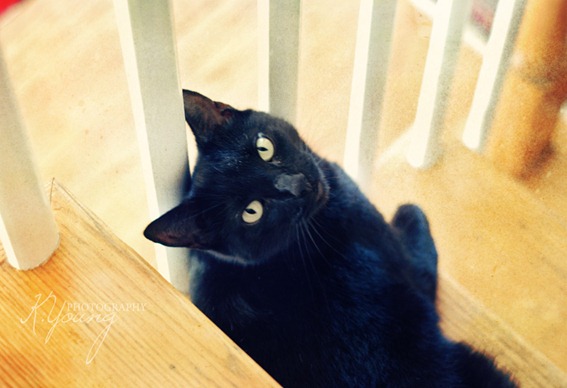 Our cat, Blackie, in her favorite seat in the house. She’s a pretty girl. 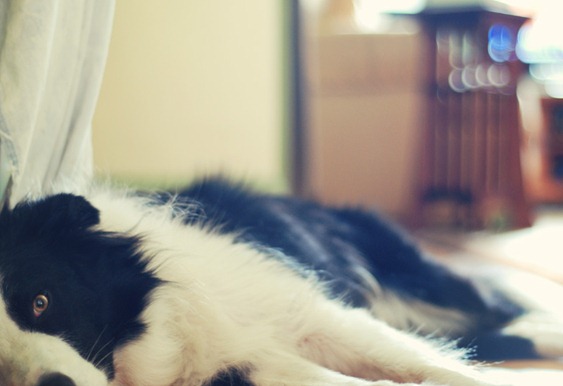 Our boy George napping in one of his regular spots. I love the bokeh in the background and the softness of this one.

Today I saw a hummingbird swoop out of the dogwood tree right past where I stood with my 70-300mm lens on the camera but I wasn’t quick enough to capture it. 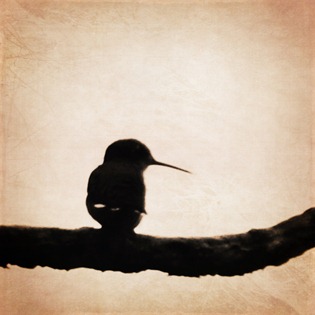 I did manage to get this silhouette photo of the little fella after he flew back to the same tree to have a little rest before continuing his foray. 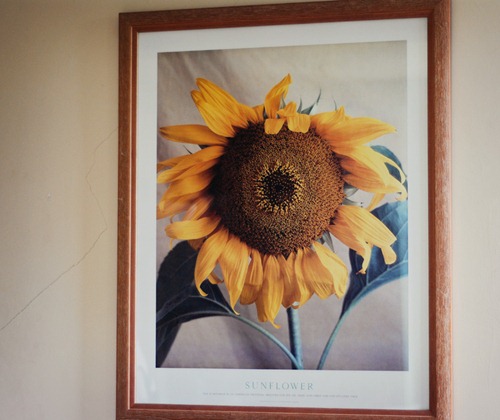 I keep this picture upon my wall. It hides a nasty stain that’s lying there.

(My undying admiration if you know the song and the group who sang the lyrics above and in the post title).

For some reason, a reader (hi, Andi) asked me to post the sunflower that was on my wall after reading my answers to my most recent Q&A. For what it’s worth, my sunflower is just a print I bought through Martha Stewart Living magazine when it was in its infancy. The magazine, not the poster. I’ve had it for years. The photographer is Christopher Baker and I had it framed in light colored oak.

I watched another Netflix ‘watch instantly’ movie over the weekend that I think you may enjoy. It was billed as a light comedy, but I thought it was a little dark.

Easy Virtue was originally written by Noel Coward in 1924, then adapted by Alfred Hitchcock as a dark thriller in 1928 and later made into this little comedy in 2008. It stars Kristen Scott Thomas as the delightfully toxic matriarch of an aristocratic family living in a country estate in post-WWI England. Colin Firth, my main reason for even considering this offering, gives a nuanced performance as her melancholy husband. The storyline has their young playboy son (Ben Barnes) surprising his family by bringing home a new bride – a beautiful platinum-blonde American widow (Jessica Biel), and a racecar driver at that. We find out quickly that mother is not pleased in the least. Jessica Biel holds her own, for the most part, in some excellent sparring scenes with Kristin Scott Thomas. The cast of characters is a fine one and I laughed out loud in spots (keep your eye on the butler) but it was the beautiful period wardrobes, especially those of Ms. Biel, and the phenomenal views of the English countryside that left me in awe. The film was shot entirely in the UK.

Although the ending is contrived (hey, it’s a comedy!) and the score is absolutely ghastly (my husband left the room!), I’d see this one again.

Perfectly right, Tall Guy. You now have my undying admiration.

I love that song.

JackDaddy already got the right song and title. I was swooping in to say the same thing! I'm also a huge fan of pink geraniums, Blackie and George!
xoxo
Donna

Crap. I could sing parts of it, but couldn't come up with it.
Brain dead.

Love the geranium picture. And George. But who doesn't love George?

I'm in love with the urn of geraniums! Lovely effects! Oh I love them all:) Blackie is a beautiful kitty, and we know how handsome George is...

Love the sunflower!! Thank you! I asked cause I am working on getting the perfect sunflower picture to print for my wall. :) Love this one. I went to Chanticleer gardens (http://www.chanticleergarden.org/)
on the Mainline this weekend, thought of you and your macro lens, the place is awesome! I will be going back when the sunflowers are in full bloom next year and am also not motivated to plant more in my yard and a cutting garden next year. You could almost hear my garden breath a sigh of relief today with the rain. :)

Love the urn pic and Blackie (I had a Blackie once, real original name huh:!) Love George too...always! ;D

Love those pink geraniums! Just beautiful:) You've been home all weekend and I've been gone all weekend....wine tasting, party, open house for the new ag shop at the high school.....it feels good to be home now:) Enjoy your Sunday night!

I love geraniums too but they don't do well here as they are easily infested with tobacco budworms (does your sis have that problem too?). I gave up after the first few years living here.

I had absolutely zero idea of the song lyrics...still don't!

Blackie is my fave...as are boring weekends! <3

These are all wonderful shots - thanks so much for sharing.

Ohhhh your photos are wonderful. See...now you will get creative with your other lenses. Love Blackie!

I knew the words but could not come up with the song! I should of though as I had that 45 RPM when I was in high school. I love the picture of Blackie. She looks like she is posing for her picture. :0)

Very creative blog . I too love the bokeh with your resting dog. Your cat is a beauty . I have so many photos of Sunflowres I dont know which to put on my wall.
I think it will be a new one I just did but not certian.
Have a great week coming up. I read your blog with the questions and I just couldnt get it together to answer. Maybe this week. What a day.
I off to sleep.

Donny Osmond? What the...

I love your dog and cat. Blackie is quite a beauty--and quite photogenic at that.

Oh goodness, K, you blow me away with your photography, you really do. If that's a silly phase then keep it up!

Thanks for popping by to see Bonnie; you made her day!

Aren't geraniums just the best? They laugh at the heat and bloom and bloom! :c) Love the effect on that photo.

did not get it until the sunflower..made me smile ..memories on that one..you have included some lovely windows into your world today

The urn of geraniums is just beautiful. It belongs on MY living room wall!

I went to see that movie on a lark when it was at our local independent film theater. Your description of it was perfect. I like to do that sometimes, just drive to this theater, (by myself) and just pick one of the five films that I've never heard of based on the synopsis. I am almost never disappointed. And some of the best films I've ever seen have been there.
I love George's photo, but I adore the hummingbird. They look so cute when they sit still, and that is a great shot!

I am packing that lens tonite and its on its way tomorrow .. STFD!

OMG!
When I read about the sunflower on your wall, I looked up at mine and wondered what her's looks like.....imagine my surprise, it is the exact same one, I bought it back then too....I am amazed at the synchronicity.....smiles.

You have some lovely critters. I really like the first photo. So beautiful with the soft colours. Love the texture you used.

I need a boring weekend every now and then to recuperate!

Great shots, hope you get your macro back soon.

Very sweet shots of the critters, and that urn should be on the cover of a gardening catalog! ~Lili

ALL your photography is a work of art - ESPECIALLY the geraniums tho!

I LOVED "Easy Virtue". I thought Jessica Biel was just magnificent...! What a wonderful movie. I was quite happy with the ending. :-)

Your photo of the profile of the little bird is magnificent...!

Please give Mr. George a scritch behind the ear for me.

i loved that song back in the day too.

i have a weak spot for sunflowers

LOL I have never even heard of 10cc and would never in a million years have guessed who sang this!

Love, love, love the hummingbird photo...the silhouette is beautiful...Love your pink geraniums too:)