I thought that today would be the day. I thought it’d be the day that I’d be able to use my new laptop to write a post and to work on my photos in the new Photoshop program I have. But, alas, it is not.

I bought a new laptop recently but I’ve been putting off getting it set up.

There’s just so much, you know, and it all gives me such a headache. It’s why I get someone really computer-savvy to help me with it. At school today we got Photoshop CS5 loaded into it and then had to figure out how to get the actions and brushes from the old version into the new version. And while we were in there, CS5 was looking a little scary to me.

After bringing it home and setting it up, complications ensued which were all solved but one. It wasn’t until the new laptop wouldn’t recognize my external hard drive (where I store all my photos) that I gave up. Try as I might, I couldn’t figure it out, so I called it a day and turned on the old laptop.

And now I am sitting here with my faithful old friend where the Photoshop is familiar and the keyboard is soft and sweet. And I don’t care that I can’t read any of the letters.

I am going to get this all figured out but until then, here’s a few more glimpses from Maine for you. I opened up the album this afternoon and looked at the water just to calm down. 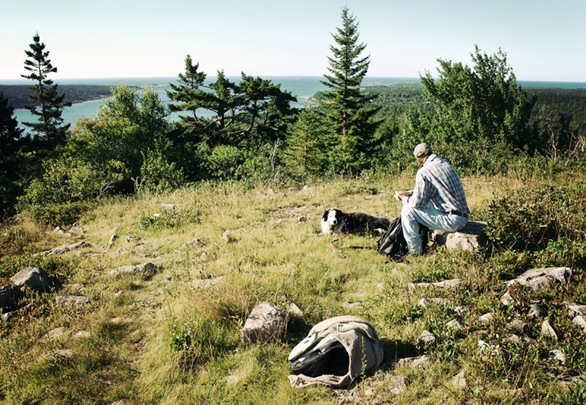 One morning, we drove to the peninsula across from us and hiked up Pigeon Hill. It was a nice little walk and a we had a pretty decent view at the top. 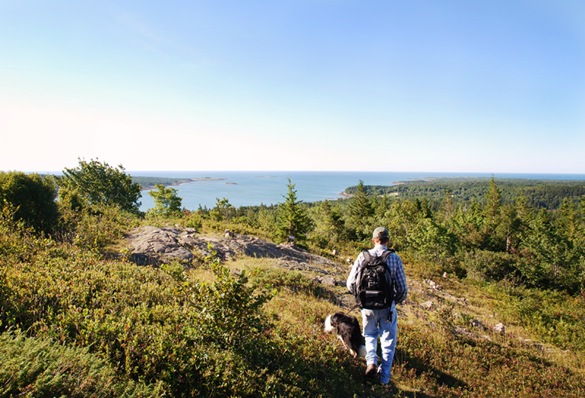 We started down and saw some beautiful birds hanging out together at the top of a dead tree. They were cedar waxwings! I changed lenses and this was as close as I could get with the 70-300mm. 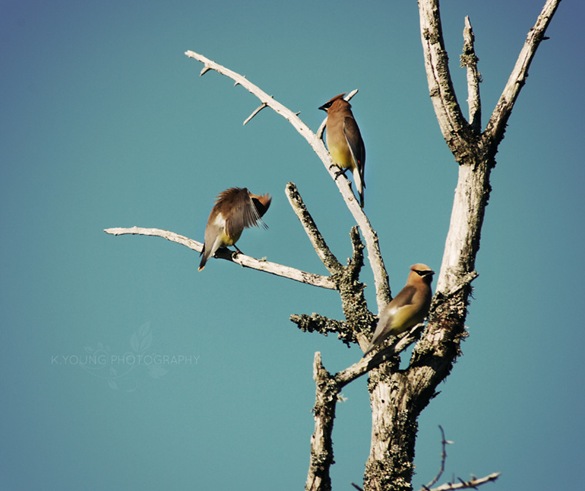 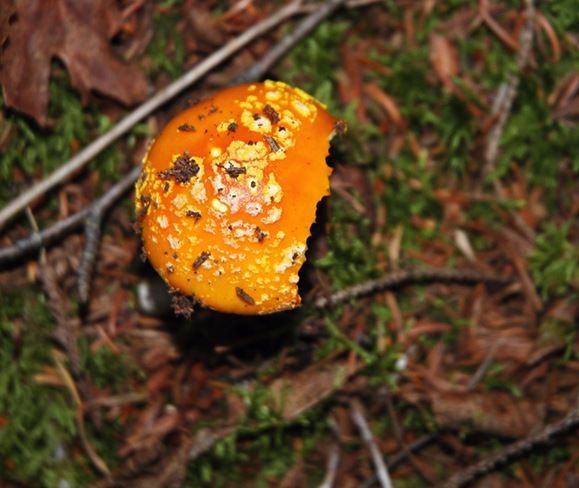 This little mushroom is half-eaten and you can see the little critter bites, probably from a mouse. I wonder what would happen if a mouse nibbled on one of these and it happened to be a magic mushroom. 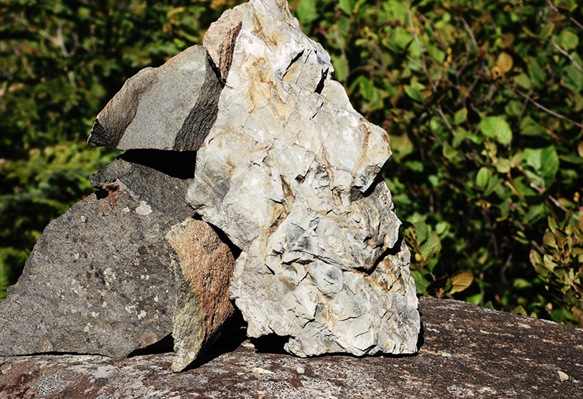 Maybe then he would see a face in the rocks.

Or maybe a giant cut-out of a fisherman holding a can of sardines. 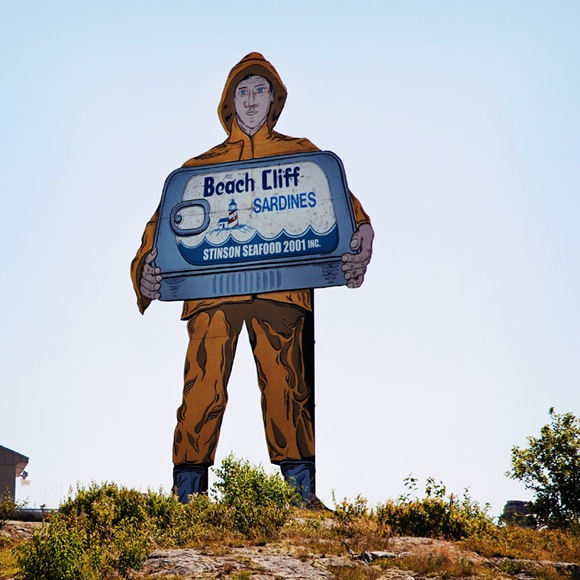 I took this in Prospect Harbor, home of Beach Cliff sardines, the last sardine cannery in the United States. They closed their doors just this past April. Maine was once the center of the thriving sardine industry which began in the 1870’s and reached its heydey in the 1950’s.

But we were talking about mice, weren’t we? Or was it computers or birds? Anyway, here’s a question for you:

Have you ever eaten sardines? And if so, did you like them?

Hey, it’s not too late to enter my Giveaway, especially if you’re reading this before 6 PM on Friday, Aug. 13.

My husband likes them on toast.

I had them in Portugal and they were different; they were big! We cooked them ourselves on a grill and we had them breaded in a restaurant; they were very delicious. I've been afraid to try them here lest I be very disappointed.

great pictures! Nope, I don't like them. My husband does with mustard.

There's a nice story about the closing of that cannery and a long-time employee ...

I love sardines, with lemon of course.

I hear you about the new laptop, I just started from scratch on mine. Don't have a clue how to transfer anything. LOL.

Never tried them, my mom used to eat them, but I couldn't do it.

That would be one happy mouse, and he would either be terrified of the giant sardine man or really, really amused by him, I can't decide which.

Good luck with the new laptop, if you lived closer I would send my son over to hook you up, he's great at that stuff.

Fresh sardines are wonderful. Tinned not so wonderful but I will eat them. I worked with some one who hated tinned sardines; when I ate them at work they would complain and cover up my lunch...
Ms Soup

oh, i'm in the minority - i like them on saltines with mustard ;) we often had them when we went to our cold water cabin to spend a weekend fishing...

I remember my mother eating sardines. She would buy a tin every now and then and it was a real treat for her. Me ... don't like the little buggers! Enjoying your trip to Maine!

Never tried them but, I'd give them a chance. I mean whats the worst that could happen? I find out I don't like them? That I do?

No, haven't had them, but let me say this about that.

One time I discovered a man I worked with was waaaaaaaaaaaaaaay - I mean WAY - older than he looked. Astounded, I asked how that was possible, that he looked so much younger.

His answer? He ate sardines.

Love the close-ups of the cedar waxwings and the mushroom and the pole vault into magic mushroom land.

Update to the sardine cannery...a Mass firm just purchased it and will do lobster processing there. I like sardines, but not when they are too big and you crunch into the bones. I realized this one day when I ate one for the first time without a cracker. ewwwww ~Lili

Does saying I REALLY want to win this give me two entries??

I tasted sardines one night when we were having a Fear Factor game at home. I must say it tied closely with canned cat food in my opinion coming in second to pickled pigs feet. So the answer is, NO, I do not yearn for sardines although I COULD eat them if I was really, reeeeeelly hungry.

yes I have ate sardines and really enjoyed them in Mustard sauce. sounds terrible but on a cracker they are great. Thanks for asking. Wayne

I could never see the reason to eat one......and I still don't.
Love the birds......you could write a book with pictures about your husband and George from the back.

I have eaten sardines, don't remember liking them very much, but that was years ago. Very small ones, on a cracker with mustard, sound pretty good. Maybe I'll try them again.

Love your photo of the cedar waxwings, the clarity is amazing! You must love that lens!

My husband says I like sardines, but honestly, I think he is just making this up because liking sardines would be something I would remember. He also tries to tell me I like liver and onions. Perhaps part of my brain that holds "food likings" has been fried. I think not!

I have never been able to even attempt it. They scare me. My little brother eats them on ritz crackers with Tabasco sauce. He has done it since he was a toddler. I think it started after I let him roll off the changing table. Oh, never mind. What kind of laptop did ya get?

Oh what a delightful blog..I stumbled upon you today and wanted to say hello!!
I understand your frustration...I am the computer guru in our house...sometimes it is hours of messing around to figure it all out!! Good luck!
Am not sure if I like sardines...honestly have never worked up the courage to taste one..the smell puts me off!!
Beautiful photos...wonderful blog!!
Truly, Sarah

The Uncle's sister was Canadian and she would make this spread using sardines .. she mixed them with a dash of tabasco and some cream cheese which sounds awful but tastes great ... I had no idea it was made with sardines ... so I ate it and it was good ...

And your computer woes .. PC stuff .. this is why everyone should use a MAC ..

Um, yuk. That's all I have to say about that.

Great pics and I hope you get your computer up and running soon!

What a beautiful day. I haven't eaten sardines and unless I was the last survivor starving on the island, it's unlikely that I will.

I like sardines. I eat them w/vineagar poured over them, and crackers. Love the photos.
T

I add in a can of the mustard sardines when I make salmon croquettes.

Since they are suppose to be good for you, I figure that's a way to get them into my diet.

No... no sardines for either of us in this house. I think it's sad that they no longer fish for sardines there in Maine.

I sometimes feel bad for PC users that have problems when they buy a new system.... but then I have to ask myself why they don't just buy Apple products instead... guess they just want the familiarity of what they already know and have been using. Change is hard. Hope you get things resolved soon with the new laptop. :-)


Complications, yes, but you make them serve your vision - lucky for us

Never tried them and have to admit I dont want to either :)
Love the shots of the birds!

I have PSE loaded on my laptop and have never even opened it yet. It just is SO overwhelming. So if you start using the new laptop, I will open PS and start learning what to do with it? Deal? :)
Hubbie and I are contemplating an anniversary trip to Martha's Vineyard/Nantucket but your Maine pictures get me to thinking maybe we should go there instead. Just maybe a tad too far for a long weekend. Thanks again for sharing!
As far as sardines - they are very yummy cooked down and nearly melted into pasta recipes etc. Simply sauteed and eaten whole - gag.

Ewwwwww... no sardines here. Uncrinkling my nose.
Sorry to hear about the new laptop adjustments. I am also a real creature of habit, so I feel your pain Kate.

A mouse on magic mushrooms... hmmm...

I did see the kind face in that rock by the way, but I have been drinking Moscato... hehe.

I do eat and like sardines. They are best with ketchup.

I'm not a fan of sardines I'm afraid. And I hope you get your computer woes figured out! If you need help you can ask Mr. Tide, he's pretty computer savvy! Love the photos, they calmed me down too...I have way too much going on these days!

Just back from Wildwood. I missed you. It was fun to go back and read all your posts. And damn, I completely missed the giveaway, too! LOVE all your Maine photos!
xoxo

I love the sardine picture. We ate a lot of sardines when we were away but we don't get them here until a fairly big fishing boat comes in loaded with sardines...and then it's yummy time.

We lament not being able to get Sardines directly from the States. Our company, Vital Choice emphasizes how healthy they are and we took great effort to find sardines from sustainable sources and packed them in organic sauces or pure spring water. We have a low salt variety and a boneless skinless variety. They are great in soups and pasta. http://bit.ly/Mdg5A

I have and I love them. Plus they're quite good for you.

Welcome to the Society.