Our trip to Maine begins

I wasn’t really sure whether or not I could go for an entire week without the internet during our recent vacation to a little island off the coast of Maine. But I did it, surprising myself (and my husband).

At the rental cottage, I didn’t have phone service either, but I really didn’t mind. It was a truly relaxing vacation. And one that we both badly needed.

It began a day early due to the fact that my husband desperately wanted to escape the heat that was forecast for our area last Saturday. It bothers him so much more than it ever has in the past. We left in the early morning hours, driving as far as Freeport, Maine where we got a hotel room for the night.

I love this welcome sign along the Maine Turnpike. 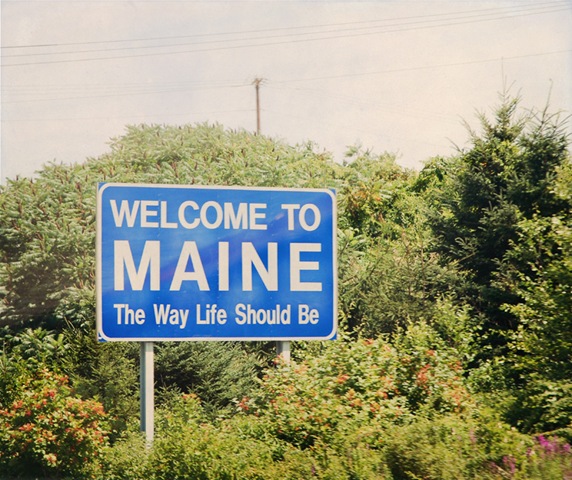 This is the first time I was able to get a photo of this sign. Rushing by in a car driving 75 mph, it’s difficult to hit it exactly and the past few times I’ve been to the state, I’ve made a concerted effort to be waiting with my camera for the sign to come in view, to no avail.

This time, I sort of forgot about all about it, then was surprised when I saw it coming into view, so quickly picked up the camera and was able to get one single shot. 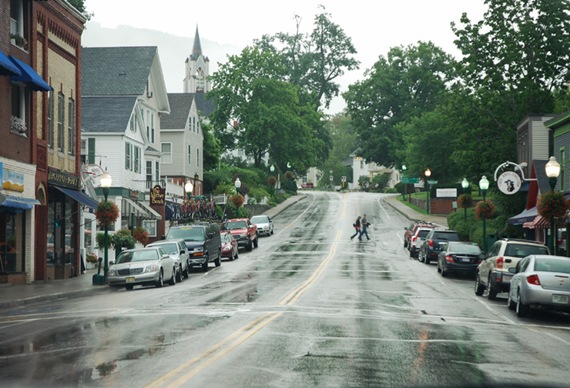 We’re very early risers, so we were up and out of the hotel room by 6 am to begin our plan of driving slowly north up the Coastal Highway (Route 1). And when I say that we are early risers, I really mean that my husband is the early riser. I would have been more than happy to sleep in until a more civilized hour. Like 8 am, for heaven’s sake. But he promised me coffee and a donut and I am a sucker.

Unfortunately, he lied about the donut.

We drove through some rain and all the wonderful little, and some not-so-little, towns like this one along the coast. This is Camden above. 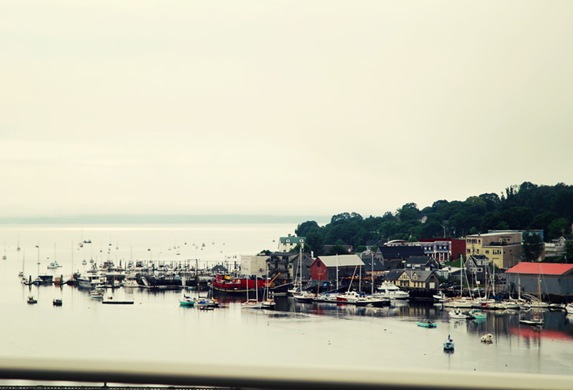 So many of the towns were so quaint and beautiful but it was a bit difficult to get pictures with the rainy weather. Crossing over the Sheepscot River, I looked to the right and saw the beautiful colors of the houses and boats at the edge of the town of Wiscasset. I quickly put the window down for the shot. 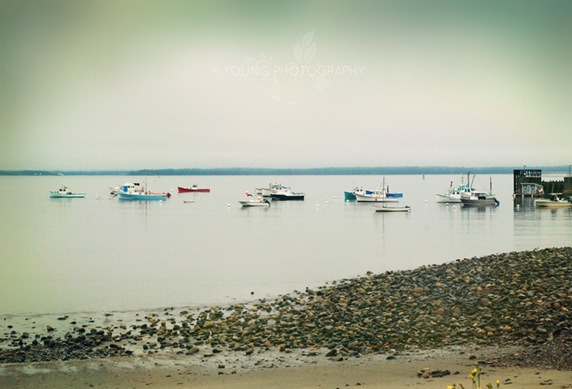 I made my husband pull over so I could take a picture of these brightly painted boats in Lincolnville. The rain had slowed to a soft mist at this point.

We made our way further north, arriving in Ellsworth (George’s home town), where we bought sandwiches for a picnic brunch and continued north from there. We stopped to eat at Schoodic Point on the Schoodic Peninsula, part of the Acadia National Park system, where I shot the photos below. 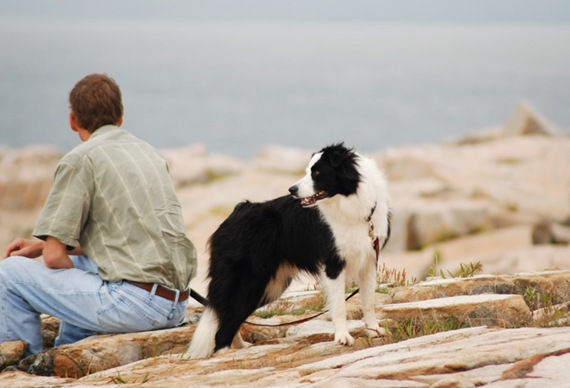 The sun had come out and the weather was miraculous. I say that because it felt so completely perfect. The scent of the ocean, the cries of the sea birds and the coolness of the air combined with the beautiful soft warmth of the sun soon had smiles on everyone’s face – even the dog.

I know that I sound like a complete romantic, but I yam what I yam. 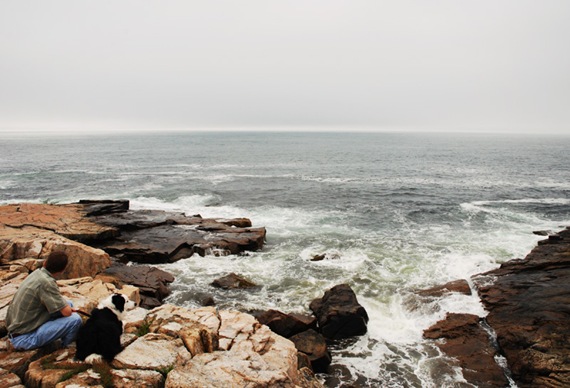 George looks a little more relaxed while sitting by the point this time. The tide was lower than when we’d been there last and the surf was much more gentle. I know it’s difficult to tell, but we were all quite high up here.

We spent some time at the park here, then climbed back into the car to see if we could find the rental house which was another half hour or so north. Check-in wasn’t until 4 pm, but we figured we would at least try to find the place. And if it was clean and ready, then we’d go in. 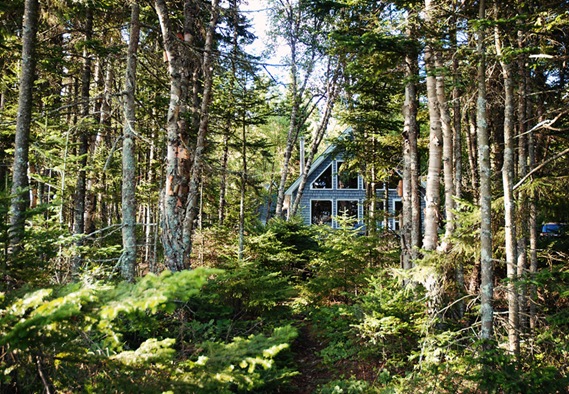 And it wasn’t nearly as rustic as I thought it would be.

To be continued tomorrow, my friends . . .

So beautiful. And, so happy.

It's better than an Agatha Christie mystery! :)

i am so enjoying your delighful Maine phots ..here where it is 104 ..no complaints ..the winters are good...

My SIL served a 2 year mission there for our church..he wants to go back with his new wife and show her all of it. He really loved the area and the people there. Your last shot is beautiful! :D

Can't wait to see the rest... love the photos of both your boys/men on the rocks.

Looks so peaceful - a perfect spot for relaxing. And taking pictures, of course.

I am positively "every single shade of green" with envy!!! I'm so loving these trips to Maine as it is the closest I'll be for who knows how long. Thx for sharing!
p.s. never lie about donuts!...never!

Oh how I know the route well! Even on a rainy day, it's pretty great looking. You really impressed me with your perfect shot of the Welcome sign, I've been trying to capture it, for like years.... ;) ~Lili

Sigh.. I envy your visit to Maine but I so appreciate that you share. More, please!

Hi Kate:
What a beautiful place! I've never been to Maine, but your photographs inspire me to schedule a visit. Thank you for the houses on the shoreline, the boats at anchor, and the restful image of George and your husband. An a-frame cottage in the woods...simply heavenly.
xoxo
Donna

Beautiful. I would love to see it in person some day!!

Ah, Camden, Wiscasset. I used to live in China, Me.......and those little towns are just a hop, skip and a jump away.
I LOVE Maine, too.

Looks and sounds perfect - all except for the no donut part.

Can't wait to see more, glad you enjoyed yourselves.

I remember reading your posts last year on Maine. Because of them, I seriously want to vacation there.
You said your husband is more sensitive to heat ever, so are my parents. Isn't that weird? Not to be rude, but is it something to do with aging?
Sorry I basically missed a year of your blog. I started reading in April of last year, but fell of the blogging world for a long time. Back on now, and going strong.

I can't wait to see the inside of the cottage. What a beautiful area! Love the brightly colored boats.....reminds me of a little fishing village when I was in the Azores Islands :)

Next trip be sure to secretly pack some donuts...then you can sleep 'til 8am.

Maine just as well be a foreign country...I don't think I'll ever be priviledged to go there. So I am so enjoying 'our' trip with you so far. Cannot wait until tomorrow, and the next day, and the next....and on and on and on!

Did you go by and see George's biological family?

Oh so beautiful! See...we can survive with the internet...maybe not a camera though :)

Looks so wonderful, I am so glad you had a great trip.
My husband is a super early riser too, me not so much. But that's just wrong about the donut.

It's supposed to get hot here again, hope it misses you...

I've never been to Maine but it has been on my list of places to visit for a long time :):) The picture of Camden made me smile and ready to pack my bags tomorrow!

Maine is such a beautiful state and we love driving the coast line.

It looks idyllic. 6am is a bit early for me but my husband is up then too, sometimes earlier depending on the farming calendar. And to have been promised a donut and not delivered is simply unforgiveable!!

What a lovely journey. Glad it provided the being "unplugged" that you needed. :c)

Beautiful! Thanks for taking me along.

Beautiful photos! Too bad it was raining, but sometimes a misty photo of boats on the water seems more appropriate than in glaring sunlight.

I am eating it up. You're a great ambassador for the state of Maine. I want to be there in the worst way!

Oh how totally beautiful. Makes me want to take a trip there.

Kate--I despise the heat and humidity of Florida, and my boyfriend and I have decided to move away soon. He is originally from Maine, so it is an option.
An FYI--Camden Hills State Park has a beautiful little hike to breathtaking views; try it next year. I don't have the particulars as I am out of hot/humid Florida in my home state of Wisconsin which is hot/humid right now, too, but better than Florida.
Edna St. Vincent Millay--from Camden--wrote one of her poems at the top of Mt. Batty (sp.).
Barb T.

Amazing! I have never been to Maine, but your photos make me wish I was there.

I can't wait to see the inside of that cottage!

We never made it out to the Schoodic Peninsula on our trip. I think next time, instead of staying on the island, maybe we'll stay up that way. Maybe it will be less crowded that way are well - Bar Harbor was so very busy!

Great travel story with a cliff hanger of sorts. Never been to Maine, so it's extra yummy!

love this post. Thanks for sharing...pictures and places are beautiful!

I have to agree with everyone...makes a body want to go there in the worst way! Thanks so much for taking us all along, great photos!!

I love the way you tell stories! And your shots are, as always, lovely!

We have only been to Maine once but I immediately recognized the photo of Camden and Lincolnville. I hope someday to go back and spend more time, maybe in August. Heat index in southwest LA today was 106!!!

I'm looking forward to more of your beautiful photos.