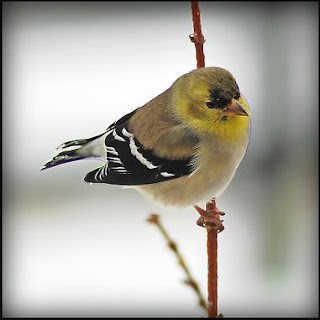 I'm waiting for The Oscars to begin and reflecting on the peaceful day I spent.

My husband and I sat outside in the sun today and read for awhile until the wind picked up and it started feeling too cold. Then we came inside and I checked my mail and was on the computer for a bit.

I checked Pioneer Woman's blog and clicked on this advertisement for Rocketlife.com and played with that. 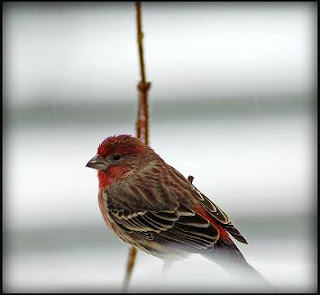 Rocketlife is a pretty cool site that turns your photos into all sorts of useful items. They've got photo books, calendars, notecards and lots of other things. They claim that you can make an entire photo book in two minutes. And using the site today, I can honestly believe it.

They've got an automated feature that sorts through all the colors of your pictures and seems to be able to differentiate birds from dogs from feathers (I don't know how it's done) and it assembles everything into professionally laid out pages that look like they took days to create.

For photo books, I've used both the Kodak Share program (which I really don't prefer) and Shutterfly (which I really do). The problem with each is that it takes ages to upload your photos into the program. Shutterfly has so many more background and layout options than the Kodak program and I have also tried Lulu, but it's not as user friendly as the other two. 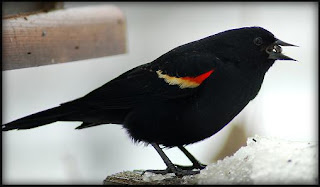 Rockletlife uploaded my pictures (and mind you, I have dial-up) in less than one minute. 75 pictures in one minute! I don't understand it. Nor do I know where they went, but hey, I can upload all of them again in less than a minute, so I don't care. Has anyone out there tried Rocketlife yet?

Oh, the bird pictures. You must have realized by now that they have absolutely nothing to do with this post. But for your viewing pleasure, I have chosen to feature an American Goldfinch, a House Finch, and a Red-Winged Blackbird. I wouldn't wanna mess with that last one. His sharp little bill looks like it could do some harm.

Gotta go. The show is starting.

Love the birds! Every spring, I anxiously await the arrival of the redwings, who perch on every fencepost and trill their little tune.

So are those 75 photos being made into a book?

I haven't tried Shutterfly or Rocketlife. I'm curious now. Maybe tomorrow (or would that be later on today LOL) I'll dig around Flickr to see what people are using...

I love house finches -- they are so cheerful! We do see some goldfinches and red-wings around here, but never close enough to get a picture. Lovely!
xoxo,
Mary

Gorgeous birdy pics! Hey - I tagged you this morning if you want to hop over to my site and see :)

IT WA SGREAT SEEING ALL YOUR PICTURES AND READING ALL THE STORIES. HOPE TO READ AND SEE MORE SOON. PEGGY

That last one has a beak that looks like my tweezers!! I wonder if he could be trained to pluck hair? Hmmm.

I wasn't thinking of making a book. Can't think who would want to buy it, but it's an idea I may have to mull over, Jeannelle.

Thanks, everyone. I love birdie pictures, too. Uh-oh. I've been tagged. Better go check that out. Oh, hi Peg! Aren't you glad you called me this weekend and found out how to comment? Now you don't have to lurk anymore . . .

Tammmy, I'll send the bird your way. I'm sure he could be trained for anything you need!

I've always loved taking pictures and so do my little girls. Our pictures don't COMPARE to yours though.

Where did you get all your bird knowledge? I mean I'm lucky is I can identify a Pigeon and a Seagull! The bird pics are beautiful.

Love, Love the bird pics! But then I'm kind of a bird nut. Do you know I miss watching my birds while I'm off on vacation?? I'm strange...

Never tried Rocketlife, must go check it out.