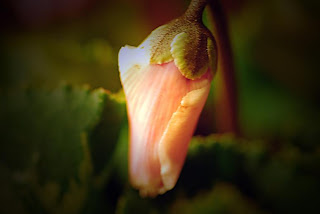 I was playing with photoshop today, using my new book, The Photoshop CS2 Book, by Scott Kelby. I love this book.
This is an effect called a Soft Spotlight. It actually looks like there's light emanating from inside the little flower bud.

I still think the layout options on this particular blogging template leave much to be desired, but the top photo of each picture is the one I worked on and the bottom is the original Straight Out of Camera Shot. 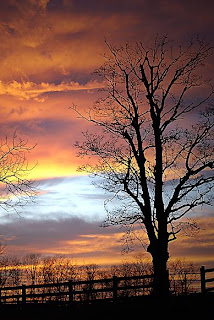 For the flower bud, the first thing I did was sharpen up the original. Not too much, though. Next I adjusted the hue & saturation by turning up the red just a little bit. And finally, I used a render filter called flashlight. I situated it in the center of the bud. I've never used the spotlight effect before and that's the trick I learned today.
It's a trick that Scott says he learned from the famous nature photographer Vincent Versace. Before he learned this trick, he goes on to say, it used to take him a long time to finally achieve this effect. Now it's done in one step. For the tree photo, I shapened it up. A whole lot. Enough to bring the branches out noticeably. Then I chose the same render filter and style and placed the circle over by the cloud on the left. This effect more resembles how the sky looked to me that evening when the sun was peeking through the clouds. I think it's just enough.

Best thing is that it's basically really easy. And it's fun.
What do you think?

Very nice. I've mentioned to you before, I don't have Photoshop but sometimes I think I NEED it!
I like the subtle changes.

I remembered you told me that. And still, your photos are awesome.

But sometimes, it just adds something.

Thanks for stopping by again.

Lovely blog and photos. I'm curious now about what part of Maryland? I'm in Calvert County in Southern Maryland.

I just took a two-day PhotoShop class last week. So much to learn!

Ohhh... great tips and lovely photos. I may have to practice that next! LOL

I'm sure GIMP has something similar...

What do I think? I think YOU need to be shopping around for a GALLERY to exhibit in!

Wow! I am really impressed with your beatiful work! Thanks for sharing it with us.

I am a point and click - or is that point and shoot? - I always forget... - photographer. I have a little Canon PowerShot A610 digital camera I have with me in the car or when I walk at all times. Even at my elementary level, it is a joy to look at the images captured on a given day.

Often times the image that you really don't think will amount to much will surprise you and even more often you will see things in a given image that you never noticed originally.

I certainly enjoyed visiting your blog and will come back often.

Welcome to Robin and to Russell. Thanks for stopping by.

Thanks for the compliments everyone. I'm not fishin' for them, really. I just love learning new tricks. And Rich, the bud is not phallic. I'm sorry you do not like the bud. (he calls me every day to tell me what he thinks).

Good job on those CG. I don't have Photoshop for my Mac yet. Had it on my PC, but can't bring myself to deal with the PC on a daily basis. I've been using PS elements on the Mac. Still has a lot of options. I have my sites set on the full version of Photoshop again for my Mac though.

I love that effect - have to see if I can duplicate it with Elements or PSP X2. And I love photos of leaf-less trees. Love, love, love. :) I also answered your 6 quirks tag finally this morning.