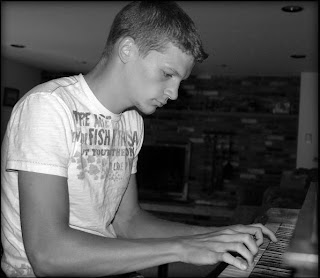 Kacey, over at Wine on the Keyboard has issued a Black & White Challenge for the weekend and I've been playing around with it, but am sort of confused. I've tried following her advice directly from Scott Kelby and have also fooled around with one of the commenters suggestions to make the white area "glow" but wasn't satisfied with the results.
The first photo is of my youngest son, Shaun. He plays piano and he blows me away with his ability.
The second photo is my beautiful neice, Kim who you may remember from a previous post. 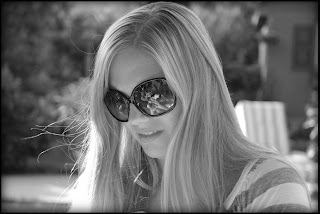 And I've been working on this for awhile now. I take my photos in color with my digital camera. And I'm converting them to black & white in Photoshop CS2. In my CS2 book, Scott Kelby tells me to convert to black white by choosing the Cannel Mixer from the Create New Adjustment Layer pop-up menu at the bottom of the Layers palette. Then when the dialog appears, to click on the Monochrome checkbox and click OK. But I'm telling you, I can get better results by just desaturating the image by going into Image>Adjustments>Desaturate (control+shift+U).
So here's my challenge pictures. But really, it wasn't a challenge because it feels like I'm cheating. I did add an effect that I learned on Pioneer Woman which is the black border with a soft effect around the edge. I did this by going into Layer>New Adjustment Layer>Curves. Drag the slider down to an output of about 16 and click on OK. Then take your Rectangular Marquee tool and draw a thin box around the whole photo. Then hit Control+Backspace. Then go to Filter>Blur>Gaussian Blur and up it to 250 or much less, depending on the effect you want.
I used pictures I've taken of PEOPLE rather than things. I like the B&W effect on people.

I'm working on my Photoshop skills too and love the B&W look. You did a great job on Kim's photo.

I just picked up the Photoshop CS3 for Nature Photographers and will be working through a couple of those exercises this week. I have a long way to go myself.

I like Kim's photo, too. The little flyaway hairs on the lft-hand side add to it.

Nice job! I'm going to try the GIMP tips to see what I can come up with...

That's neat you have a son who plays piano! Good for him! My kids all took lessons, but just didn't latch onto it.

The photos look nice in B&W. I'm intrigued by the reflection in Kim's sunglasses....that really stands out.

The reflections on your niece's sunglasses are really neat in black and white. Hey, my 3rd born boy plays the piano. Well, the keyboard connected to the computer. Lots of fun to listen to things he composes.

These are great! I love the look skin and hair in B&W. I tried only scenery and didn't think of people. LOL