Sorry, there's no winner for WGG #6 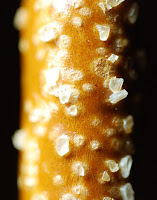 Sorry, no one guessed correctly this week. The answer is a PRETZEL ROD. I guess I should have given a better clue, like it was edible. Some of the guesses were outrageous, though. But I hate to see that it was so vexing to some.
People said it was carmelized and it was, sort of. It was a glaze put on pretzels to hold the salt on. I had some really sharp photos of the salt and as soon as I saw them, I knew they were a dead giveaway. So I used the blurry salt pieces. One person said it was baked, and it was. A pretzel is baked.

I'll try to make it a little easier next week. Maybe. Well, I'll think about it.

On my monitor it looked sooo orange. I'd never would have guessed pretzel. Ah, well... I'll try again next week! :D

yeah, on my monitor is was orange too. So that's why I didn't guess it. I'm sure that's my excuse...

I need to remember to think along a more micro line when it comes to your guessing game photos. Good job!

Never in a million years would I have gotten that. It looked orange here too. Oh well, keep them coming!