I love my dog 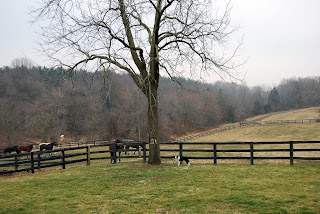 I love this dog.
He's such a busy guy.
This morning, after treeing our cat, he wanted to rile up the broodmares. The cat is halfway up the walnut tree in our backyard, right around where the trunk begins to fork. If you look closely, you'll see her little black head peeking out on the right. 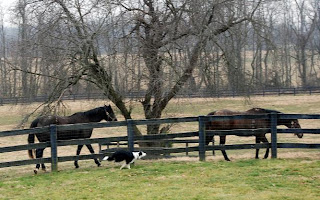 The broodmares are having a little run. That grey mare is the one that always gets things going. She appears to be the leader in this little group. That black on the far right looks like she's feeling her oats. They don't run for long, though. Since I've taken these pictures, they've moved on down to the far end of the paddock. Far away from the absorbent puppy.

It all began when I got up. I heard him down here running about with his squeaky toy. He'd tried to wake me around 6:30 am, but I wasn't having it. My husband had already taken him for a quick walk, and had just left to take care of the horses. 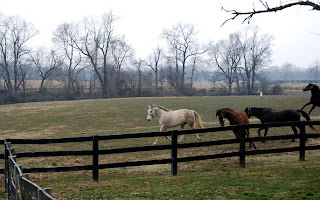 I came downstairs to have my coffee and there was George waiting for me with his squeaky fish toy. He prances about squeaking the toy, and sounds like a little baby when he chews it. He loves to play fetch. He can catch his toys in mid-air and then he returns them, very gently, next to where I'm sitting. He's very polite that way. Then he slowly backs up and gets down on his haunches and waits for the next round of fetch. This can go on for hours, if you let it. But today he'd had enough. And that's when he went outside to tree the cat. 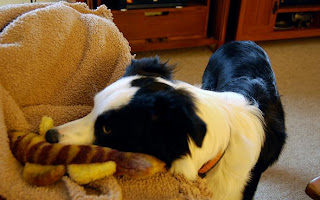 As for me, I've got cleaning to do. And it's a perfect day for doing so. Have a great Saturday. I'll return around 6 PM to announce the winner of the Guessing Game (see below). We may already have a winner. But then again, we might not. I'm not telling.

Where would we be without our animals? George is a sweetie.

George looks to be a great friend!

Our dogs are Australian Shepherds.....enthusiastic friends and faithful helpers with the cows.

Thanks for visiting my blog and leaving your thoughtful comments!