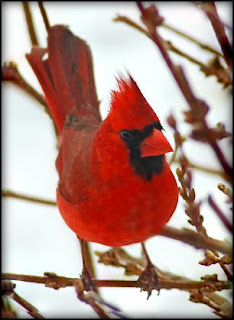 I got the call this morning that school was cancelled and since I work there, I've got a snow day. I'm stuck inside because it's raining ice and I'm feeling just a little bad because my husband is outside working in this weather. There's horses to be fed and broodmares to be bred, and someone's got to do it. But like I said, I'm feeling a little bad that I'm inside warm and dry. The key word being little. Oops. Did I say that out loud? 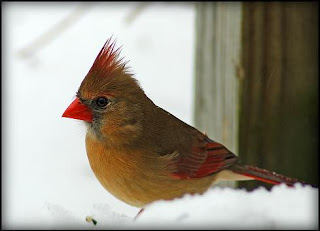 I've been somewhat constructive today. After breakfast, I took George out for what I thought would be a nice big walk. I mean, the snow isn't deep. So I put on my Sorrel boots, bundled up and grabbed the camera. We got about half-way down the hill when it started lightly raining ice again, but I kept going. After walking around the pond and along the fencerow on the other side towards the woods, my boots started dragging and my spirit started slagging. What is up with this rhyming??? 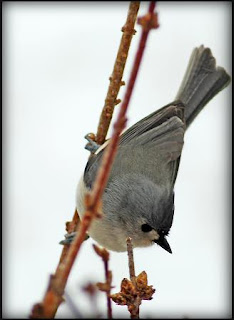 Finally, I called it quits when the drops began getting heavier and I began to get worried about the camera which I'd been trying to keep covered. I'd only shot a couple pictures of George by the time I tromped all the way back to the house. Before we left, I'd made sure to fill all the bird feeders and by the time we got back up the hill, I could see backyard was filled with lots of birds. I saw red-wing blackbirds, chicadees, tuted titmice, goldfiches, finches and cardinals.


I shot these pictures through my sliding glass door. I was hoping for a male and a female cardinal and was about to give up, when lo and behold, two cardinals appeared. I got some really nice shots and spent some time playing with them in Photoshop. After lunch, I'm planning on cleaning out my walk-in closet and after that, I'm creating a filing storage system for all my pictures.


What I'm really going to be doing is having a hot cup of tea and reading for awhile. Then I just may make some soup. And take a nap.


It is a snow day, after all.
Hope you like my bird photos!

I just love your bird photos!! I'd like to put a feeder up to get some photos, too.

Did you see Kathleen Connally's photoblog today? It's of a Border from the Westminster Dog Show. Beautiful...
Kathleen's photoblog

tell me you photoshoped those finches, 'cause mine are so not that yellow yet... kind of a dusty mustard color. Great bird shots!

you had me going a bit on all you were going to do this afternoon. I was afraid I was a slacker on my snow day yesterday!

Christine, the finches were photoshopped to sharpen them up a little. The original was sort of dark, so I highlighhted them. I also hit the contrast button, but just a tiny bit. I looked at the original and all they are is a bit darker. We've had a pretty warm winter. Maybe that's why they're turning more yellow.

Thanks for the link to Kathleen Connally's photoblog, Christine. Beautiful border collie. I'm gonna stick with Georgie, though!

I'm sorry, I meant Kacey for the finches and photoshop!!

For your thoughtfulness in sharing the lovely bird photos, you deserve that tea, soup, book, and nap. Enjoy!

Love your pics. Like the sound of your day too.

What pretty photos! And through a window too? Nice edge work!

It's cold and icy here too. School was canceled. Thankfully, I had filled the bird feeders late yesterday, so I don't have to go out in the ice. The little dogs rush outside to do their business while I cheer them on from the doorway.

Oh, your photos are fabulous!!! I want to be able to take some like these! :)
xoxo,
Mary

Those are beautiful photos. I love, love, love cardinals. I have never seen one around here so it is wonderful to see a beautiful picture. You are very lucky. Birds make me happy.

I am truly blessed. I have a prolific bird population and a super camera. There's half the battle there. Add some photoshop, and it's easy to make a good pic. I'm glad to be able to share them!